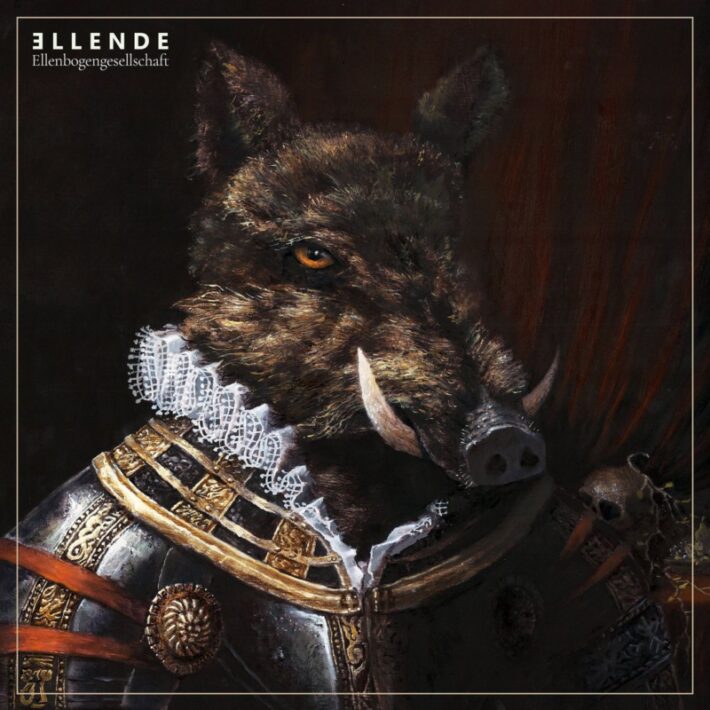 On Friday, September 30th, Ellende released their fourth full-length record, titled Ellenbogengesellschaft. For those who don’t know the artist, Ellende is an atmospheric/post black metal solo project by the Austrian L.G (who also performs his music on stage with a live band).

Since its foundation in 2011, Ellende’s sound has been continuously evolving. On the first few releases, you can hear L.G. has been exploring and defining the project’s sound, which resulted in increasingly coherent compositions. Not just in terms of songwriting, but also regarding the production, each record has sounded more professional than the previous, while still staying true to the atmosphere of the first releases. From 2016’s Todbringer and later, L.G. seems to have been putting more thought into the structure of each album: the earlier records (at least compositionally) tended more towards anthologies, whereas the recent releases are more like concept albums. This evolution in sound and composition is especially noticeable on Ellende’s previous EP, Triebe, from 2021, on which L.G. reworked and re-recorded his 2014 EP Weltennacht (a more in-depth review and analysis of the EP can be read here).

This development is definitely continued with the release of Ellenbogengesellschaft. It’s the first full-length in three years, and L.G. has made good use of this time to further develop his sound. In part because of the instrumentation, the overall sound of the record is fuller, but there’s also moments in which L.G. shows more vulnerability than he has ever done on his previous records. This is especially the case with the vocals: on “Ich bin”, for instance, L.G. introduces the record with a melancholic piano over which several almost fragile clean vocal lines create a moving atmosphere. Of course, a key element of Ellende has been the (often negative or melancholic) emotion expressed in the music, but with this new kind of vocals, this aspect has reached a new level. Of course, on “Unsterblich”, the song to which the opening track builds up, L.G.’s recognizable grunts do return. What immediately catches the attention of the listener is that the songwriting has matured as well: Ellende often transcends the four-bar musical themes and chord progressions that are dominant in most Western music. Intense black metal passages are aptly alternated with more tranquil passages (in which the vulnerable clean vocals return), overall making for a killer opening of the record.

Another first occurs on the following track, “Ruhelos”: it’s the first track in Ellende’s discography that’s an official collaboration. J.J., best known as Harakiri for the Sky’s vocalist, has been invited for guest vocals and it works really well. His more shout-like vocals add an intriguing new touch to Ellende’s music, and when they sing simultaneously, it adds a lot of depth to the vocals. After another impressive black metal track, it’s time for “Someday”. A piano, quiet drums, clean guitars and even whistling create an eerie soundscape. Although a little less echo on the individual instruments would have made the track sound a bit tighter,  it functions well as an interlude between the first half of the record and the relatively heavier second half. And in that half, the listener is up for three more moving tracks. On “Freier Fall”, L.G. once again proves his skill by seamlessly switching from a waltz-like 3/4 rhythm to a 4/4 rhythm, and on both “Abschied” as well as “Verletzlich” the incorporation of spoken word (or whispered word, on the first) adds an interesting layer to the storytelling.

Overall, Ellenbogengesellschaft is a beautiful record on which Ellende’s sound has been developed even further. Both the composition as well as the production sound professional, while L.G. hasn’t compromised the sound that defines Ellende musically. The album will be appreciated by long-time fans and newcomers alike, and is highly recommended for anyone who’s into music that explores and expresses the beauty and melancholy of the darker side of the emotional spectrum.