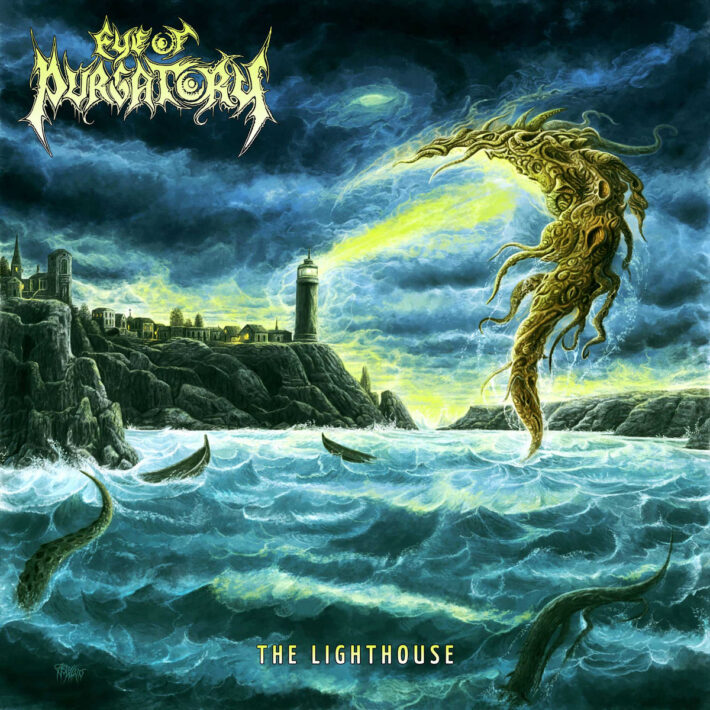 Before I pressed play on this album, I had a few preconceived notions. Based off the artwork and logo, I was expecting an old-school death metal sound stemming from the 90s. A total nostalgia trip where the focus is recreating a period in time as opposed to crafting original ideas. What I was not expecting was well-written songs, superb musicianship, and an excellent execution of a package that is far better than it has any right to be. Eye of Purgatory have captured my attention with The Lighthouse, an album that I willingly replayed not because of obligation as a reviewer, but as a newfound fan.

I will admit, I am not the most well-versed in old-school death metal. Most of my exposure comes from the fantastic Youtube channel InfidelAmsterdam, and what I have heard, I’ve enjoyed. I’ve listened to enough to be able to identify its characteristics and attributes, but haven’t sought it out like I do other genres. With that being said, The Lighthouse is not only good enough for fans of this genre, it is also a wonderful album for my less-experienced ears. There’s blast beats and aggression, groove and heaviness, killer vocals, excellent drumming, tasteful guitars, and incredible bass playing. Moments like the intro in “They Silently Await” and the melodic hook in “The Lighthouse” are some of the highlights that catch my attention.

However, my favorite part of this album is…the keys. If internet forums are anything to go by, this is where the album might lose a lot of people. But for those of you with an open mind, you might just enjoy this. The keys ride that fine line between adding another layer to the tracks that ultimately is useless and being so over the top that it changes the feel of the song. It feels like the parts are written to be distinct without overshadowing everything else. Eye of Purgatory didn’t call Jordan and ask him to contribute virtuosic noodling over everything (granted, I wouldn’t be upset if that happened). The keys fulfill their role perfectly without being over and under-utilized.

On top of superb songwriting, this record does not overstay its welcome. With the total run time coming in at just under 40 minutes, the album would end right as my attention was starting to wander.
If I had to offer any criticism, it’d be that most of the songs hover around the same tempo. I didn’t notice this until I was skipping between songs to find specific parts. I had to double-check my screen to make sure I actually switched.

Other than that, The Lighthouse is a well-executed album. Despite my lack-of-in-depth-knowledge about the old-school era of death metal, I found it enjoyable and easy to play again. I look forward to more from these guys.

Tracklist:
And From The Fog…
The Lighthouse
Fornever To Awaken
Carved In A Stone Bleeding
Pieces Of A Fading World
They Silently Await
Where Slowly Life Fades
Rotting Pathways
Rebirther

Obituary - Cause of Death: 30th Anniversary
At the Altar of the Horned God - Through Doors of Moonlight Review
Deiquisitor - Downfall of the Apostates Review
Amiensus - Abreaction Review