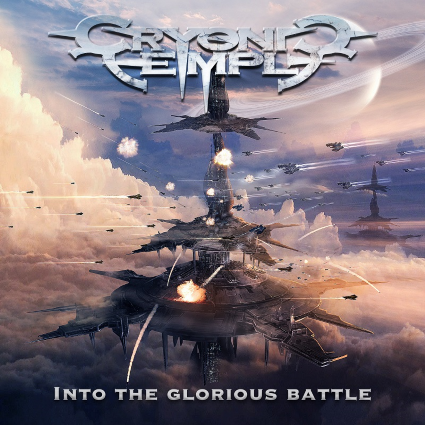 Picture a man, frozen like a popsicle, sealed inside a glass tomb.  A light blinks on and off ever so slowly on the outside of the vessel, displaying weak vital signs.  This man waits for a future that may come as he hides from the present that he despises.  Perhaps one day he will wake to discover new technology and new life.  Cryonic Temple, which formed in 1996, borrows its namesake from this process, called cryogenics.  It’s still the stuff of science fiction, but that doesn’t detract from the band’s intense focus on matters of life and death.  It’s been almost a decade since the power metal outfit’s last release, but their new album, entitled Into the Glorious Battle, continues the thematic imagery of conquest and war.

9 years is a long hiatus for any band, and the immediate question is:  does Cryonic Temple still have it?  Not only is the band back in force, but in almost every way marks improvement over their past releases.  The strengths of Into the Glorious Battle lie in the virtuoso singing of vocalist Mattias Lilja, epic symphonic elements, and soul-stirring power ballads.  While most power metal vocalists register in the upper octaves, Lilja’s ability to hit the low and mellow notes give the album a memorable flair.  There aren’t quite as many catchy choruses on Into the Glorious Battle as on previous albums, but this results in a more mature sound as the band borrows as many influences from progressive metal as it does from power metal.  The one area that seems to have regressed is the guitar playing.  There isn’t much guitar soloing on the album, which lets the vocals take the forefront, but it’s kind of like baking a cake and forgetting to add the baking soda.  Outside of this one blemish, Into the Glorious Battle fires on all cylinders, taking the listener on an epic journey to the far-flung battlefields of the future.

Into the Glorious Battle slides into one’s consciousness with a symphonic intro that is filled with roiling harmonics, ripening crescendos, and delicate flutes.  “Man of a Thousand Faces” is an upbeat power metal song that showcases some of the best guitar playing on the record.  The lyrical content, a struggle against forces of darkness, recalls Iron Maiden’s “Out of the Silent Planet.”  If you listen closely, you can hear the Maiden influence on the drumming in the next track, “All the Kingsmen.”  Coupled with the bass guitar, some of the patterns sound like material on Maiden’s Somewhere in Time album.

The fourth track on the album is by far one of its strongest.  Innovative orchestration, an epic and memorable chorus, and atmospheric background singing all contribute to the brilliance of “Prepare for War.”  “Heroes of the Day” is an intriguing track, as it uses melody and dynamic contrast to let Lilja’s vocals shine.  The next effort, “Mighty Eagle,” is typical power metal fare, and is probably one of the weaker songs on Into the Glorious Battle.  With the introduction of “Into the Glorious Battle,” one thinks they are listening to a Summoning track, but then the guitars and drums kick into full gear.  It’s a celebration of all that makes a warrior strong – strength, passion, and patriotism.  Guest female vocals and a segue by the keys all add to the splendor of the song.

The next three tracks mark a weak point on Into the Glorious Battle.  “The Speech” is exactly that – a spoken portion that is somewhat forgettable.  “Mean Streak” is somewhat puerile in lyrical content and the musical direction seems to contrast with the rest of the album.  “Flying Over the Snowy Fields” has a memorable chorus, but the band doesn’t really branch out or make the song overly interesting.  “Can’t Stop the Heat” features galloping riffs Maiden-style and culminates in a gratifying guitar solo.

“The War is Useless” is brilliant.  The orchestration –including acoustic guitar and piano – is hands-down the best on the album, and Lilja’s vocals are spine-chilling.  It’s strange to point out a ballad as the strongest point on a power metal album, but “The War is Useless” demonstrates a song-writing maturity of Cryonic Temple that they haven’t shown in the past.  It’s also a clever lyrical tactic – while the first part of the album deals with war, victory, and machoism, “The War is Useless” and “Heavy Burden” point out that endless fighting and death does not come without a cost.

Which takes us to “Freedom.”  Clocking in at almost 8 minutes, the album closer beings with symphonic elements.  Lyrically, it focuses on the emancipation of the battle-ridden, psychologically-challenged warrior.  It showcases each element that makes Into the Glorious Battle Cryonic Temple’s strongest album to date.  Strong vocals, a catchy chorus, perfectly balanced orchestration, operatic background vocals, and progressive guitar playing all set apart “Freedom” as a bold and defining finisher.

Cryonic Temple returns with passion, progressiveness, and power.  The band has managed to keep the core of their power metal sound while branching out more into progressive metal.  “Into the Glorious Battle” is what one might expect from a power metal album.  It has all the hallmarks of the subgenre – rousing choruses, strong vocals, crunching guitars – but beneath it all, there’s a mark of maturity and exploration that makes Into the Glorious Battle as memorable as it is proficient.  Fans of Sabaton, Blind Guardian, and power metal in general will find material to enjoy.  After 9 long years of resting in their own symbolic cryogenic sleeping chambers, Cryonic Temple awakens to breathe new life and passion into their music.