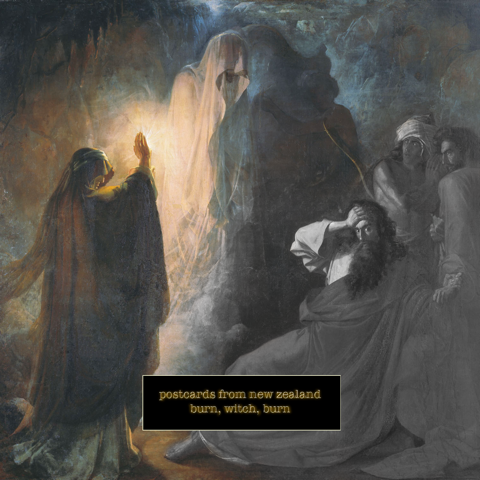 Postcards From New Zealand is an anonymous project that mixes a whole lot of metal subgenres. A quick look at their Bandcamp page shows that they’ve already released over 25 albums/EP’s since their foundation in 2008. Their new album, called Burn, Witch, Burn, is the first album of a trilogy, and can be classified as an experimental record which mixes various musical styles, like black metal, sludge and doom. The album explores humanity’s hatred, which is not necessarily a new theme in extreme metal, but the it allegedly focuses on discrimination against women. The album is said to take the ideas of the historic witch burnings (hence, the album title) and place them in a modern context, “exploring negative stereotypes of women reinforced in our patriarchal, heteronormative, Western Society.”

An experimental record that addresses and explores such a theme (which unfortunately is still topical in our present-day society), and mixes influences from various metal subgenres could really be worth checking out. Unfortunately, this is not the case with Burn, Witch, Burn.

Because of the large amount of musical styles that get combined, there’s a complete lack of coherence on the record. Each track has a different sound, and even within tracks, there are passages that seem to have nothing to do with each other. This doesn’t even have to be a problem – musical variety can make an album especially interesting – but in that case there should be some coherence in the composition and structure of the record. Tension should be built up and released, and different musical styles should correspond to this structure. On Burn, Witch, Burn, however, it’s hard to find any structure. The succession of different passages (loud and quiet, fast and slow, high and low energy) is sudden and illogical. There’s no buildup from one passage to another, which means that the vibe has already changed before the listener has a chance to get into the music, which can quickly become annoying. On the shorter tracks, the lack of structure isn’t necessarily a problem, but especially on the longer tracks (like the title track, which lasts over six minutes) the band fails to keep the listener engaged, because there’s no buildup and release of tension.

Regarding the composition of the music, the album is also flawed. The band claims to be using non-standard time signatures and dissonance in order “to craft a despicably disturbing sound.” They succeed in creating such a sound, but not in a good way. The odd time signatures are sloppy, and the changes in rhythm are imprecise, making the music sound amateurish. The isolated guitar riffs aren’t bad per se, but they’re not catchy. Even after having listened to the record about ten times before writing this review, there’s not one riff that stuck with me. Furthermore, the composition of the melodies seems completely arbitrary. The band claims to be consciously making dissonant music, but in order to do so, one must know which notes can be combined so as to create tension between melodies and chords. On this record, however, it seems like the band have chosen completely arbitrary notes to put together, letting go of any sense of tonal structure in the music. Even atonality can be of virtue (like Arnold Schönberg did in the early 20th century), but it would be an insult to the expressionist composer to compare the composition of Burn, Witch, Burn to his work.

Lastly, about the lyrical theme: as written before, exploring a problem in today’s society through music has a lot of potential. However, even though Postcards From New Zealand claim to address the serious topic of discrimination towards women, most song titles seem completely ‘tongue in cheek’. Other people might interpret it differently, but with song titles like “Pinky Swear”, “Dead Skin Care”, or “Holy Bazongas”, it seems to me that they don’t take the topic seriously.

In short, Burn, Witch, Burn is not worth your time. The complete lack of structure on the album as well as within each individual track makes it so that the listener doesn’t get caught up in the music. The sudden changes in musical style, the weak riffs, and the seemingly arbitrary ‘dissonant’ melodies make it annoying to listen to the music. Finally, the band claims to be addressing a serious topic in today’s society, but their song titles make it seem like they don’t take it seriously themselves, so the album really has no redeeming elements. Its premise showed some potential, but unfortunately Burn, Witch, Burn is a failed experiment.