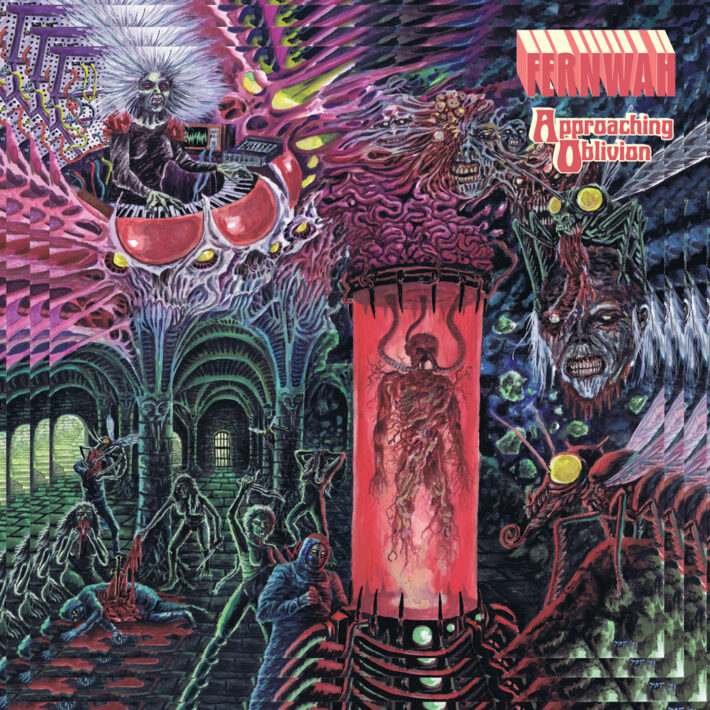 Fernwah approach as the year ends, offering you a buffet. The promotional material lists prog, black/death, tech, psychedelic, synths and stoner fuzz as various sounds and approaches present on this release. Once you listen to their new release, Approaching Oblivion, it’s clear this is more of a sampling than a full list. Fernwah’s clear path to success involves drawing on all of their disparate sources, blending the best parts, and moving their sounds before their flaws can even wake up.

So yes, there’s variety bursting from Approaching Oblivion. But that means nothing if the different styles aren’t well done. The opener, “Toska” consists of little more than a guitar interlude. I’m not drawn in, I’m not particularly impressed by the songwriting, and on every listen past my first one I tolerate it so that I can move onto the meat of the album, hoping that said meat hasn’t gone rancid.

From there, Approaching Oblivion switches to an instrumental track that smells vaguely like Scale The Summit with some doom influences and spoken word on top. It’s not bad, but does nothing to justify its inclusion on this record. Track three, “Leaking Out,” provides a more direct death metal track complete with guest growls from Sanguisugabogg, and it’s this point where problems truly coalesce. We’ve had three tracks, with three different styles, and all were competently forgettable.

The variety here does nothing except prevent me from ever settling in. It doesn’t keep the music fresh, as individual songs drag. It doesn’t break any boundaries or create anything interesting through contrast. No track ever really tries anything new or strays beyond standard sounds of its backbone genre. In fact, Fernwah end up hurting themselves by jamming these different sounds together. “Leaking Out” primed me to expect more vocals that weren’t consistently there, so most other tracks had an unfilled gap front and center. The shorter tracks only made the longer tracks sound even more stretched out and tired. All we’re left with is a band that needs to rely on expert songwriting throughout ever-changing sounds and styles, and they simply don’t provide that.

Approaching Oblivion feels like an exploratory release that forgot to actually explore. I never got a sense of what Fernwah were trying to accomplish. There aren’t standout tracks, and the only moments in individual tracks that really stick with me are the moments that feel like mistakes: A weird stumbling moment from “Leak Out,” my desperate and vain hopes that “Vertigo Of Freedom/Individuality Rendered” will end sooner, and so on.

Fernwah give us plenty of redeeming factors as well. They clearly have a solid foundation in all of their influences, so the promise of future releases is high. The riffs may be forgettable at times, but they’re not bad and can carry individual passages well enough. Approaching Oblivion isn’t an awful album,  I just needed more than was here in order to enjoy the experience.

The last track. “Corrosive Catharsis,” sounds great. A quiet, reflective, quasi-instrumental and guitar-driven track with melodies and emotional moments, it serves as a great contrast to “Leaking Out” and shows the Opethian triumph that could have been. It’s a satisfying closer to Approaching Oblivion, and leaves me with a more positive aftertaste than I would have expected.

Approaching Oblivion was not an effective release. Fernwah’s kitchen sink approach intrigued me, but did not go beyond that. While there were some bright spots, I don’t think I’ll ever feel the need to come back to this. I’ll recommend it to anyone who feels drawn in by the collage of sounds. Fernwah could grow into multi-genre masters, but they aren’t there yet.