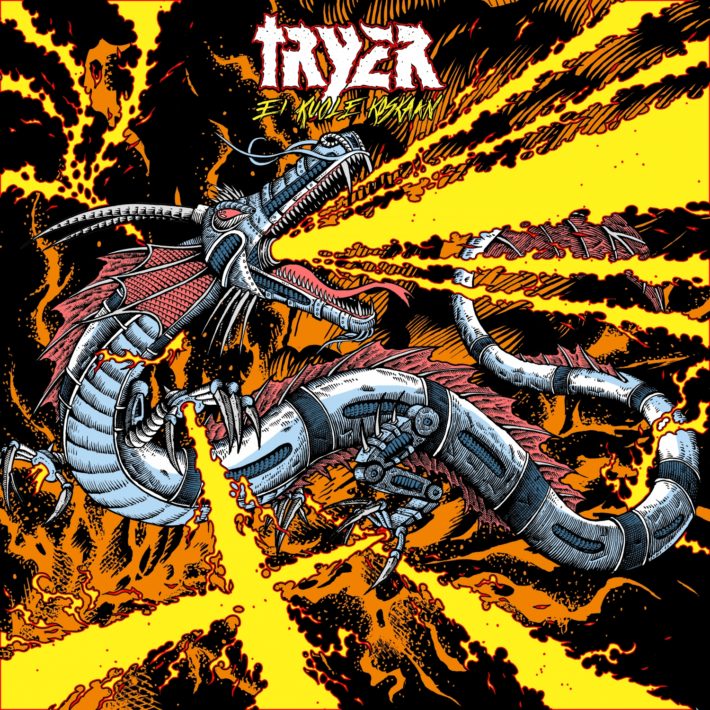 It’s occasionally worth taking a break from all the dead-serious metal we listen to. Stuff thematically dealing with death, war, philosophy, the cosmos, human condition, et cetera, whatever you want. It’s heavy stuff, both musically or otherwise. Even for seasoned veterans does this abyss-gazing get tiring. So to clean our palate we seek different kinds of music. What I find especially works is looking for something more upbeat, exciting, fun. Thankfully, metal and rock music have this aspect mastered as well (arguably this modality is even historically prior to the serious stuff). So let me introduce you to a band that’ll get your worn spirits lifted right up.

Tryer hail from Finland and like many Finnish bands choose to sing in their mother tongue. I, of course, can’t even start deciphering what they’re all about, but Tryer confirm the notion that sometimes you don’t really need to. This is their fourth full-length, and just a quick glance at the others tells you what they’re all about. The first one is titled “Hero Quest”, the second has a dreadnought from Warhammer 40k on the cover, the third is adorned with some sort of Cthulhu-elephant. And of course, this one has a steel dragon shooting lasers. That tells you all you need to know. It’s light-hearted, it’s got fantasy and SF, it’s fun and its fast. What else you need?

Tryer’s sounds is firmly founded within hardcore punk, though you’ll hear plenty other punk influence – melodic hardcore, metalcore, crust, even pop punk. But of course, there’s plenty metal influence as well, most of all heavy and speed metal, and I’d even say I heard some stoner metal groove in there. It’s blazing fast riffs for days, plenty of shred and of course a lot of melody. They’ve got their catchiness game down, and choruses will suck you in even when you have no idea what the hell they’re singing about.

Let’s talk vocals. I must commend them for a good job, they’re energetic and sincere. The singer has a good grasp of dynamics and does a great job of hyping you up, helped of course by the punk tradition of gang shouts. Though one thing needs be mentioned – the vocalist has a very specific tone to his voice. It’s very high-pitched, which I’m sure is not a problem for heavy metal fans, but unlike traditional metal the vocalist sings in a very punk way, that is mostly employing off-key shouts. Adding the fact that he rarely distorts his voice, we’ve got something that might feel grating to some listeners. It did raise my brow at first, but I’ve grown to like it with subsequent listens. But then again, no one goes into punk expecting any sort of singing skill. Still, don’t say I didn’t warn you.

The album properly hedges its bets by staying just above a 30-minute runtime. It’s not that its monotonous – there’s decent songwriting variety between songs. But it aint easy staying hyped with super-fast songs for too long, you’ll start grasping for air after a while. I like keeping my dark and despairing metal in extended durations, and my manic-frenetic stuff in small doses. And this is a dose of the good stuff – a well-made metal-influenced punk record for when you’d rather chug a beer and think about rad fantasy creatures rather than sip red wine and ponder the mysteries of satan.