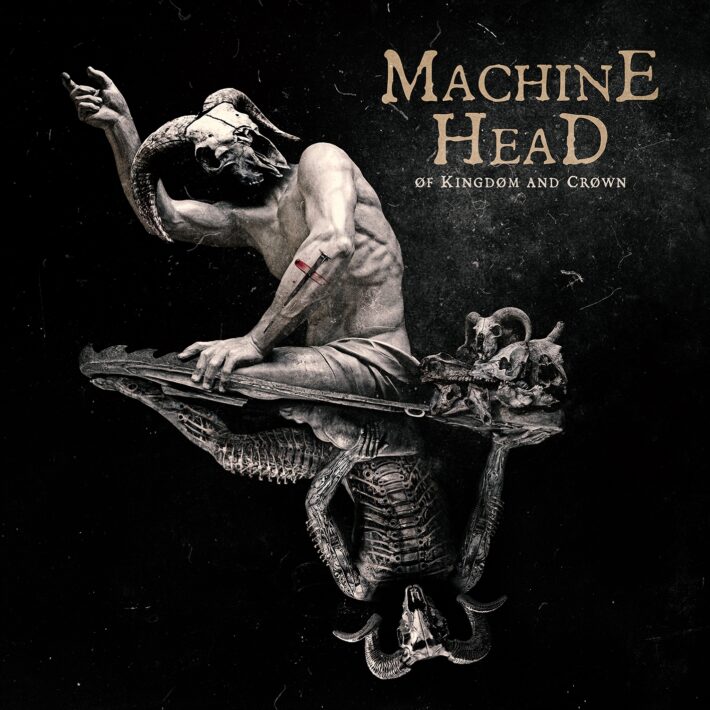 For every St Anger in your life, may you be blessed with a Death Magnetic, and for every Cold Lake that blocks your path may you find a Monotheist to help you. Machine Head are back. The band’s last full-length, 2018’s Catharsis, was received by fans and critics with more confused frustration than any album I’ve heard since Illud Divinum Insanus. This response was well-deserved; Catharsis may someday take its place alongside albums such as The Unspoken King and these previously mentioned releases as colossal mistakes by a band that should know better. How do you even recover from something like that? How do you go back in the studio and trust yourself?

It turns out that you recover with remarkable ease if you’re a good enough musician. All of those other titans managed to follow-up their Wiseau-level efforts with music that ranged from passable to their best work. Machine Head joins them. Their tenth studio release, Of Kindgom And Crown (I will not be writing the dumb stylization) doesn’t top The Blackening, and it doesn’t  match Unto The Locust. What it does do is give us solid riffs, emotionally charged choruses, and some enjoyable metal that got caught in my head.

There are still some rough spots. Of Kingdom And Crown is far from perfect. First, the album goes on for far too long; I would feel better about this record if it was half the length. Individual songs tend to overstay their welcome as much as the album as a whole does, and this problem starts immediately. Opener “Slaughter The Martyr” is a fine song. I appreciate the attempt at building tension through the quiet opening that you know will eventually explode. However, this tension boils away before it can be effectively built-upon because the opening continues for so long that it stops building towards the back-half of the track and starts relaxing at the beach. Moments like this pepper the album, and they feel like needless mistakes.

Additionally, I have trouble dealing with Robb Flynn’s vocals. His singing style grinds against my soul like sandpaper on string cheese. But this gripe is leftover from previous releases and hasn’t gotten worse. You know what you’re getting into with Machine Head, and the singing doesn’t kill Of Kingdom And Crown. I just deal with it to get at the good stuff.

On that note, Machine Head have not lost their ability to groove. I feel myself involuntarily moving in rhythm with the music. Some of these riffs have absolutely no business working, but the band’s obscene confidence and forward motion pushes everything into place. Robb Flynn is a rockstar who can move mountains with personality and grit. As much as I don’t like listening to the vocals on this record, Flynn has injected them with so much effort and emotion that I can’t help but respect the attempt.

Machine Head also showcase their ability to stop the listener in their tracks with massive climaxes and big moments. I complained above about wasted space on Of Kingdom And Crown, but I don’t care about that in the slightest when the chorus hits. The high points of the band’s sound had atrophied on Catharsis, so it’s nice to see them writing to their strengths again.

Of Kingdom And Crown will not be your favorite Machine Head record. But it also won’t be your least favorite. Robb Flynn and company have created something fun, and while it ended up being hit or miss for me, the target audience should have a great time. If you’ve enjoyed Machine Head in the past, Of Kingdom And Crown shall beckon towards you once more. Machine Head created this record with confidence, honesty, and passion. The result is a reassuring recovery for the veteran stars.