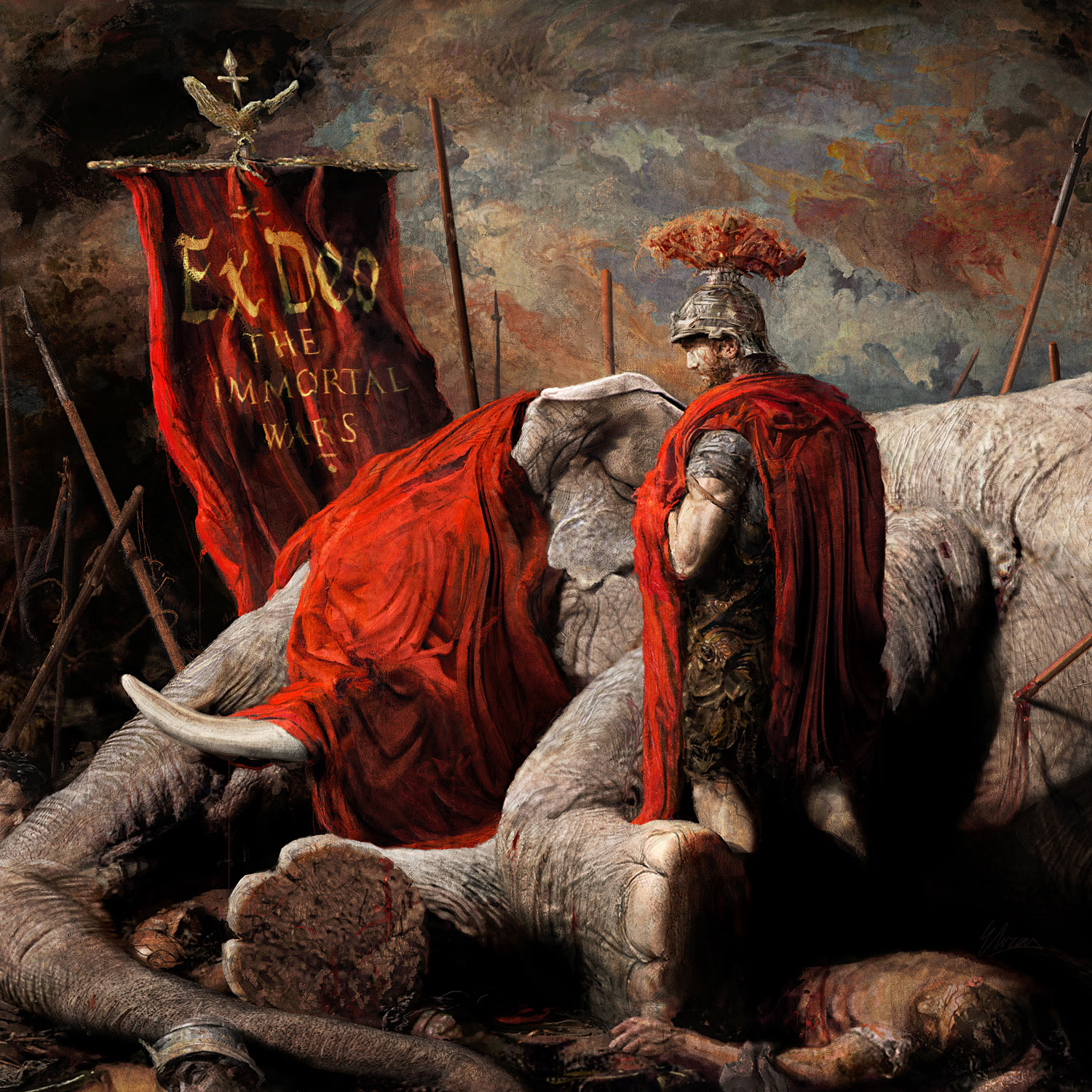 Sweat, blood, and tears stain your skin as you lock shields with your fellow soldiers, forming an impenetrable phalanx. You grit your teeth and remember your oath to the greatest power in the world, Rome.  But then you hear it over the clamor of neighing horses and crashing steel – a sound unlike any other, a trumpeting that resonates in the air like the buzzing of a swarm of locusts.  You peer beyond your shield and see massive grey shapes looming in the mist, and for the first time, you feel something akin to fear.

Ex Deo deftly captures the ancient Roman ethos in their album The Immortal Wars. Like the band’s previous two albums, The Immortal Wars focuses on the history of the ancient Roman Empire.  This time, the story revolves around the Punic Wars and the two great generals on either side of the conflict – Hannibal of Carthage and Scipio of Rome.  Ex Deo plays aggressive melodic death metal with symphonic overtones. The Immortal Wars is more streamlined than the band’s previous effort Caligvla, and the orchestral parts take a more prominent role on the new album.  Unfortunately, while the atmosphere of the record pushes it to epic heights, the guitar playing on the record only rates as satisfactory overall.

The Immortal Wars begins with “The Rise of Hannibal” to set the stage for the upcoming conflict.  The listener is immediately transported to the distant land of Carthage as surging guitars drive a relentless rhythm that is reinforced by operatic vocals and a background symphony.  It’s a monster track, an epic “Battery” kind of opening, as each instrument, from the drums to the bass guitar, are on top of their game.  Maurizio Iacono of Kataklysm fame is both the founder of Ex Deo and the heart and soul of the band.  His passionate and robust growling, which is the result of years of experience, fits the band’s sound perfectly.

A history lesson comes hand in hand with the next track, and while it’s not quite as charming as the opener, “Hispania (Siege of Saguntum)” features a variety of different vocal styles.  Ex Deo often includes spoken parts or recorded clips in their songs, which gives their work a more engaging quality.  “Crossing of the Alps” fades in to some wicked blast beats and a female background singer, and then melodic guitar riffs twist and wind like serpents writhing in the air.   Arguably, the best guitar playing of the record is featured on this song.

“Suavetaurilia (Intermezzo)” marks the halfway point of The Immortal Wars and is all about atmosphere.   The epic orchestration makes it feel like the listener is watching 300 or The Gladiator, and it’s a welcome rest from the breakneck pacing of the album.  “Cato Major: Carthago Delenda Est!” begins with soldiers barking out a cadence as they march to war.  The orchestration on this track fits well with the drums and vocals, but the guitars take a backseat and get mostly overlooked on this song.  The sixth track of The Immortal Wars is entitled “Ad Victoriam (The Battle of Zama).”  Unfortunately, there’s a lot of generic riffing on this song, which makes it one of the weakest on the album.  However, there are some interesting harmonies going on in the background orchestration.

“The Spoils of War” is typical melodic death metal fare, but once again, the symphonic elements pull this song above the average mark.  Exo Deo is back on point, however, with the heartfelt closer called “The Roman.”  Keys and violins start an epic journey filled with operatic backing vocals as Ex Deo celebrates being Roman.  Each instrument shines once again on the ending song, and both guitars shred with the grit and stamina of a Roman gladiator.  It seems that “The Roman” could very well be the triumphant song accompanying Scipio’s Triumph (a Roman victory parade) after he defeats Hannibal and returns to Rome.  It’s a stark reminder of Brutus’s famous, patriotic words after he helps to assassinate Julius Caesar, his best friend:  “Not that I loved Caesar less, but that I loved Rome more.”

Overall, The Immortal Wars is the strongest effort put forth by Ex Deo in their career.  The recording quality is much improved, and while the guitars sometimes lack originality, the epic orchestration that accompanies this bold and charming record is nothing short of brilliant.  Ex Deo proves that you don’t have to have an overly long album – The Immortal Wars clocks in at only just over 38 minutes spread across 8 songs – to make a lasting statement.  History buffs who enjoy metal will be drooling over this one for years to come.  If you like melodic death metal, Roman history, or epic battles, look no further than Ex Deo’s The Immortal Wars.

Tracklist:
1. The Rise of Hannibal
2. Hispania (Siege of Saguntum)
3. Crossing of the Alps
4. Suavetaurilia (Intermezzo)
5. Cato Major: Carthago Delenda Est!
6. Ad Victoriam (The Battle of Zama)
7. The Spoils of War
8. The Roman