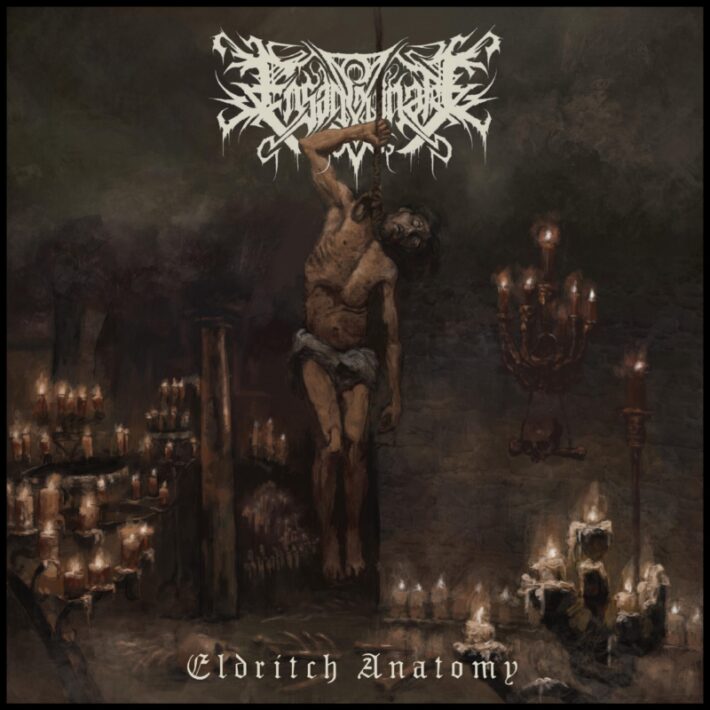 I love reviewing debut records. More often than not, a debut record is a new, exploratory journey for both artist and listener, breaking new ground and establishing an entirely unique sound. Ensanguinate are a newly-formed death metal band out of Slovenia, and their thrash-infused death metal style feels both fresh and familiar.

Their debut record Eldritch Anatomy kicks off strong, with a set of thrashy tunes on the A side filled with sharp riffs and a strong presence from the rhythm section. Their style is very straight-forward, with nothing weird or eccentric, but despite that Ensanguinate are often capable of maintaining a captivating energy. Some minor chords in the mid-part of the record combine with the mid-pitch growls to give a little bit of a blackened feel, which adds some variety to their sound. The growing crescendo on the track “Sublimation” is absolutely monstrous, and it leads directly into the chaotic “Death Vernacular”, giving the B-side of this record more of a death metal feel. The mid-paced closer “Vile Grace” has some of the most hard-hitting riffs on the album, and ends the record off strong.

Unfortunately, nothing is perfect. There are some points where the repetition in the riffs gets tiring, especially on the thrash-leaning tracks “Ghoul Presence” and “Perdition’s Crown”. These tracks also feel a bit too long, and could have used a trim. The slow parts on “Perdition’s Crown” also struggle to maintain the energy that the prior tracks built up, and it causes the middle of the record to lag. As for production, most instruments sound great, the sound is surprisingly refined, although I would have liked more oomph on the kickdrum. And ultimately, this record feels like it’s about one song too long. I’m not sure which song deserves to be cut, or if you just trim a couple of the songs down, but it does get a bit tiring listening all the way through.

Ultimately though, this is a very impressive debut. I kept getting the feeling that these guys would be an outstanding opening band for a death metal show, but that they don’t quite have enough to push them over into greatness territory. However, if a big-name band put out a record like this, I get the impression that everyone would love it. This record could realistically pass for a big-name band too, based on how refined the sound is. I struggled with the numerical rating on this one, endlessly debating between a strong 6 and a light 7, but I think I’ll be generous this time.