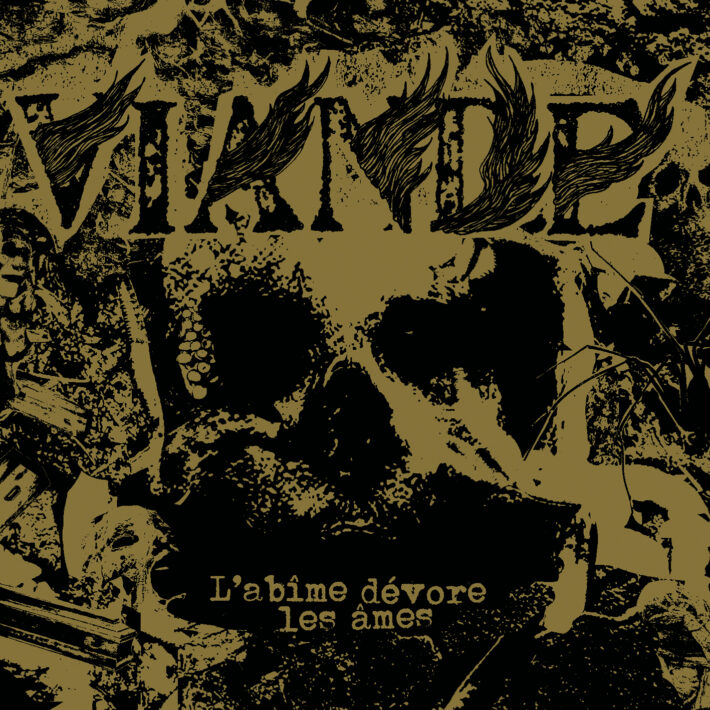 French atmospheric death metal group Viande have done their best to make their debut record L’abime Dévore Les Âmes unlistenable. The less listeners that can tolerate this suffocating, murky mess, the more this band wins. They abandon everything whenever they need to at various points throughout the record, including riffs, drums, and lyrics. Doom metal and industrial make appearances as influences before getting frightened off by the dissonant death metal core of this record, which gives Viande an interesting hook. The only issue is if all of this cacophony makes for an effective record.

L’abime Dévore Les Âmes sounds intentionally monotonous. Part of Viande’s effect is to bludgeon the listener with a uniform coating of murk, whether that murk is sourced from the full band pounding away or distorted guitars with non-descript vocal howling. When the riffs do exist, they focus on doom-infused sustained notes to help create a dizzying wall of darkness. They stretch out their sound enough to provide some distance between themselves and the big bands of this style such as Portal.

The production helps L’abime Dévore Les Âmes achieve as much success as it can. The vocals often get lost in the mix, but this only aids Viande’s atmospheric goals. Occasionally wordless howling twists in and out of the foreground, acting as another layer rather than as a lead instrument papered on top. The snare metronomically pounds away in sections, but again the band uses monotony to their advantage. The drums ensnare the strings in repetition, keeping the group locked in place through a large enough variety of patterns.

So Viande can effectively establish an atmosphere. Now what? Turns out, not much. Portal’s style works for them because underneath the layers of filth, they have effective songwriting that has potential to work in other settings if the band attempts to go that way. Bands that play other styles of dissonant music like Ulcerate or Blut Aus Nord may use some effects to make their atmosphere the primary focus of their sound, but they never rely just on that. Viande’s elongated and stripped down style just doesn’t do it for me.

Beyond that, the constant assault gets a little tiresome. It goes downhill when they try to switch it up. Penultimate track “Lueurs de Cendres” feels aimless and I beg for the track to end, not because of some sense of evil brutality, but because I get aggressively bored. Final song “Langues de Brume” fares better, and this isn’t an album-destroying issue. Viande just could have done more with their sound once they established the atmosphere.

They actually could have just done more in general. Another reason Portal’s records work better than L’abime Dévore Les Âmes does is that Portal try to push the limits of what they’re doing. If you’re going to promote a record as “truly terrifying” and by saying that “it will have you on your knees gasping for air, with a blood-stained bag on your head,” I’m going to be left scratching my head when this is what you give me. What Viande offers is not bad, but bands have been playing like this for decades now. It’s an established style, and this record needs something more than just a murky sound and some attempts at evil undertones to click.

Sodom - Out of the Frontline Trench EP Review
Deadly Carnage - Through the Void, Above the Suns Review
Deathbell - A Nocturnal Crossing
Godthrymm - Reflections Review