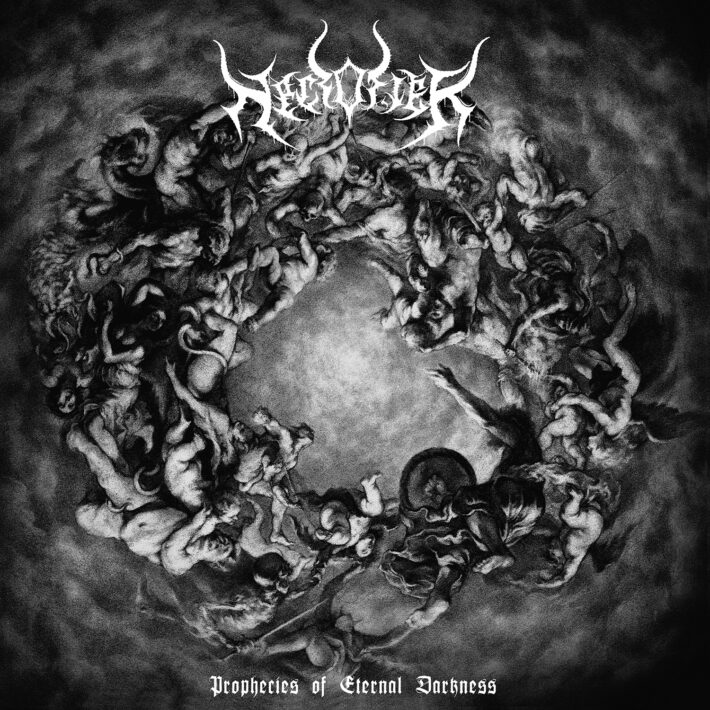 Necrofier are equal parts new young blood band and band full of established metal players wearing fake mustaches. The Houston-based group plays direct meloblack on their debut full-length Prophecies Of Eternal Darkness. At times they give fast tracks with big moments like Kvaen, but they spend most of their time in the more mid-tempo realm of bands like Dissection, albeit without as many melodic meathooks to pull listeners into their icy locker with. Prophecies Of Eternal Darkness contain no stylistic surprises. Instead, Necrofier’s success will hinge on their ability to out-play and out-write the average black metal band.

The highs of Prophecies Of Eternal Darkness get the blood pumping. Necrofier at their best give energizing, short, catchy choruses and climaxes that, while they sound great on the record, I can only imagine sound twice as overwhelming live. Necrofier’s pointed edge has a sharpness that can overshadow all of their flaws. Prophecies Of Eternal Darkness opens with their best, as “The Black Flames Burns” sets this record up with engaging riffs, fast action, and vocals that make me smile on the inside. The ending chants of “burn, burn, burn” makes this song a ready-made classic concert opener.

The flip side of this profane coin, the malaise of the quieter passages, also has to be addressed. As the highs energize, so do the lows bore. The mid-tempo sections fail to impress and end up dragging Prophecies Of Eternal Darkness down. Necrofier’s previous firepower comes back to haunt them. Take the third track, “Madness Descends.” The band still plays well. Their tremolo guitars still provide a dark atmosphere. Their vocals and solos still complement the band’s style. However, nothing really helps the track stand out. An overly long intro sours me to the song before it even starts. Then, once the band begins playing the proper song, I find that I would have just preferred to hear one of the first two tracks again. The band showed me how good they can sound, and that makes what would have been a fine song sound long, meandering, and boring. The music picks up at the end, but the purpose is gone.

Slow music isn’t bad music. Plenty of good slower black metal exists. This band just doesn’t do enough with the slow songs and they last for far too long. Many otherwise lackluster tracks, such as “Death Comes For Us All,” end with a nice riff or climactic moment that seals the track and gives me a good feeling about the band. Usually, this doesn’t carry over to the next track, which typically either begins with a rough passage or bogs down in the middle. Prophecies Of Eternal Darkness has too much fluff for what it is. An excellently evil atmosphere can only get a band so far.

Still, the writing throughout the record remains fine. I never felt that Necrofier went beyond their ability or did anything that never had a chance of success. Well, except for the final song “Plague Requiem.” This track serves more as an outro than a proper track, and doesn’t effectively do anything other than to end the album on a sour note.

Prophecies Of Eternal Darkness could have been better, and maybe the next Necrofier release will meet that potential. For now, this band hasn’t reached the heights that the best black metal bands do. The group shows plenty of promise for the future, and a more focused or more aggressive outlook would do wonders for their sound. If you’re looking for melodic black metal with good vocals and solos, Necrofier may be for you. For me, there’s plenty of black metal to go around this year.