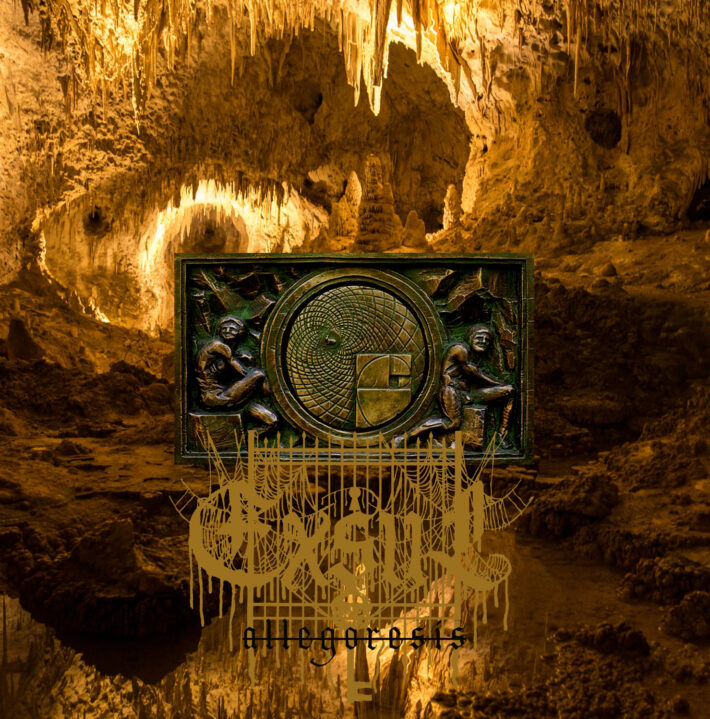 From Tucson, Arizona, hails Exsul, a two-headed death metal band that was formed in 2018. Consisting of Phlegyas, who is in charge of the “Sticks & Spells”, and Charon, who takes care of the “Strings & Curses”, the band released their first, critically acclaimed EP in November of last year. After signing with Caligari Records, they luckily didn’t wait long before recording a second EP. This EP, called Allegoresis, is due to release this Friday, October 22nd.

The EP consists of six tracks, on which the band showcases their talent in creating a gritty, heavy, and at times overwhelming wall of sound, while also having some more mellow interludes. These interludes are a bit unexpected on an EP like this, but work really well nonetheless. Regarding the production, the music sounds almost like it was recorded in the cave that’s on the album cover, evoking feelings of claustrophobia, which is one of the EP’s strong points.

The album’s first track, titled “Noesis”, starts off with raging guitars that slowly fade in, over the sound of tools being used in a cave. Somehow, the almost chainsaw-like guitar howls sound as if they are totally improvised, but at the same time, Charon seems to be totally in control of the strings. When the drums join in, the abstractness of the intro falls away, and the two start playing headbangable riffs. The deep, guttural grunts give the music a menacing feeling, as if there’s a beast living in the cave from which the music comes. A second voice utters screams full of agony, creating diversity in the vocals as well. The following track, “Glaucon’s Dilemma”, is really mellow, as opposed to its predecessor. The bass guitar plays an interesting bass line, supported by a groovy drum beat and shrill guitars in the background. The track has an experimental and interesting vibe that makes Exsul stand out between other bands in the genre.

On the following track, the energy is back to its original level. The song has a menacing intro, after which the duo’s full potential is unleashed. The dissonant guitar shredding, in combination with the pounding drums, remind of Teitanblood. The two vocal styles alternate in a sort of call-and-response, creating a lot of variety. But it’s not just the vocals that are diverse. In the instrumentals, abstract, overwhelmingly intense passages are followed by more straight-forward, groovy death metal, giving the listener some time to breathe before returning to the sonic mayhem of Excel’s full potential. The following track, “Pantagruelion”, is another relatively calm interlude, on which the distortion is turned down a whole lot.

This auditory relaxation doesn’t last long, however, for the interlude is followed by another powerful death metal track. What makes this track stand out between the others, are the heavily distorted guitar solos that seem to blend in with the rest of the noise at first, but can be discovered after relistening the record a few times. The EP ends with “Sweet Revenge”, a cover of the 1979 song by Motörhead. You can immediately recognize the reversed drum sample, and the rest of the track is a well-executed death metal homage to the influential British.

In general, Exsul can be proud of having created Allegoresis. It’s an impressive EP, on which the band showcases their skill in creating abstract and dissonant death metal, more straight-forward, groovy death metal, and even mellow interludes, resulting in a diverse record. If they can keep up what they’ve done on Allegoresis, it’s definitely worth following this band, and checking out what they’ll do next.