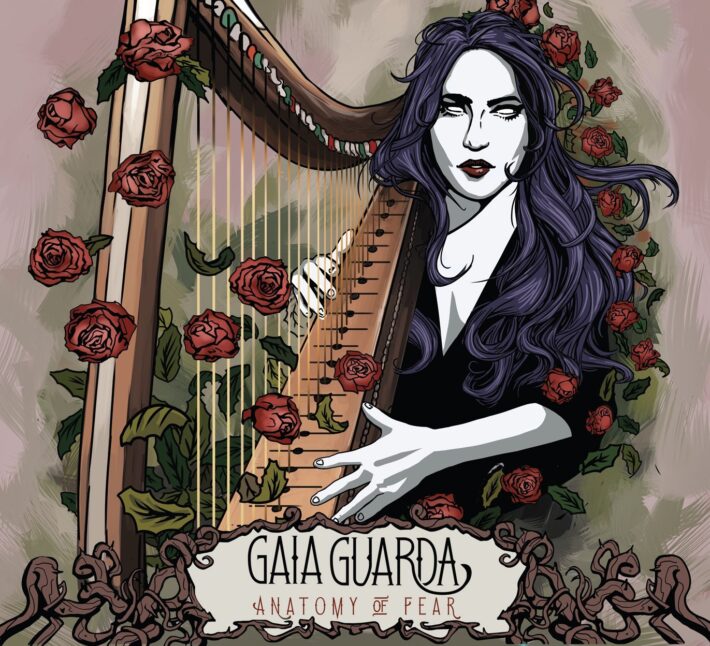 It has started to snow again in my part of the map. This is not, to the best of my knowledge, Gaia Guarda’s fault, and the snow that rests on the ground right now will melt away before the real winter begins. That doesn’t matter though. Gaia Guarda became, partially due to unpredictable circumstances, linked to the coming of winter to my mind. Maybe this was intentional on their part, but I doubt it. In any case, it is unavoidable that the change in seasons will shade my view of the music. Art cannot be removed from the world around it. Even the accidental world.

Gaia Guarda is a Canadian singer/songwriter, and on her debut solo album Anatomy of Fear, she plays a brand of neoclassical darkwave that reflects the changing seasons. Metal looks to be absent entirely from this release. Gaia Guarda is the lead singer for symphonic metal band Uriel, and former Evanescence drummer Rocky Gray graces the record, so some fans may be expecting a more rambunctious release than they find. Everything sounds quiet here, with the silences and soft moments taking the most important moments.

A deep melancholy sits with the band throughout the record. It is not center stage at all times, but it never leaves. That doesn’t mean this is an overly-emotionally charged album, just a dreary one at times. Gaia Guarda fall back onto this feeling like a warm blanket in the cold when their other strengths fail them. It should be said that I may be seeing my own shadow with this undercurrent at times. If the band released Anatomy of Fear in the heat of summer this paragraph may have been about this music’s soothing sounds rather than its omnipresent sorrow. But the world around the album’s release cannot be removed, and the death of another year sits behind every track.

These songs can be sparse and barren. As trees shed their leaves in autumn, leaving nothing but the bare structure underneath, Anatomy of Fear strips away everything but Gaia Guarda‘s voice when they most need to. When this works, it works because her voice sounds great. Clear and crisp like a cold cloudless night, her vocals allows for some pleasant harmonies to guide the listener when all other lights go dark. Those harmonies never lose their beauty. The vocals could have been overdone, but if anything I wanted more of them as they cover the instrumental sounds with a clean and equalizing presence, like an untouched coat of snow in the woods.

Of course, a new coat of snow only looks good in the morning until you have to scrape off your car. A starlit frozen lake is picturesque until you have to sleep in the cold. Anatomy of Fear could be a lot worse, but it feels wanting at times. Gaia Guarda’s voice sounds great, yes, but nothing else really stands out, and even the vocals do feel like they could have been better given the amazing tone and vocal control that was brought to the table. That also sums up the rest of the album: it could have been better. The songwriting feels merely good, the drumming is passable, and that emotional current never really hurt the album. It all could have been better.

Gaia Guarda feels fine. The vocals are a delight, and the rest of the record provides solid support. If you’re looking for contemplative music to have on as you hibernate through the coming dark times, Anatomy of Fear can serve as an acceptable guide. Just don’t expect it to be a favorite of yours by the time summer comes again.