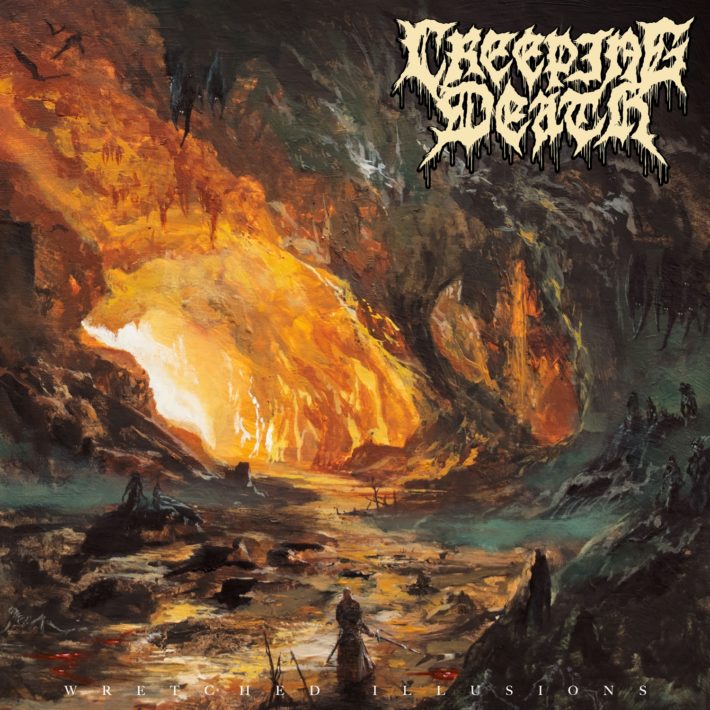 The best death metal can sound gruesome and transcendent at the same time. A successful band of this genre will be able to woo the listener with their instrumental prowess while also making it sound like their music was written inside of Jeffrey Dahmer’s grave. Aggression and structure, grime and precision, power and technique; a great death metal album will be able to combine the more raw and unchanneled aspect of the genre with the necessary musical scaffolding that allows all of these somewhat opposite elements to shine without sacrificing the integrity of any of them. Every now and then, an album will come out that nails this balance.

But enough about the most recent Witch Vomit and Tomb Mold releases, we’re here to talk about Creeping Death today and their debut full length album Wretched Illusions. They find themselves entering a suddenly crowded genre with some excellent recent releases. Wretched Illusions unfortunately is not just fighting on its own merits, it will draw direct comparisons to all of its recent competitors. Why listen to Creeping Death if you already have these other albums?

Maybe this direct comparison isn’t fair. After all, Creeping Death isn’t trying to make as much of a brutal album as the others were. In fact, the sounds on Wretched Illusions are closer to Infernal Conjuration and Entombed A.D. (and original Entombed, for that matter) than anything else mentioned so far. Rather than going for the nastiest, grimiest, cave-man-beating-a-sabertooth-tiger-to-death-with-his-dick-iest sounds, Wretched Illusions takes more of a thrash influence. Instead of grinding, wretched chugging, there is aggressive, arrogant chugging. There are a few reasons to compare Wretched Illusions to it’s grimier cousins than its somewhat traditional siblings, however. First, Wretched Illusions is simply more interesting and better written than Infernal Conjuration’s and Entombed A.D.’s releases this year. A comparison to those albums would not only be uninteresting, it would also not be informative whatsoever. More importantly, though, the music in Wretched Illusions invokes an emotional response much closer to that of the grimier end of death metal than the album’s more traditional brethren. One of my initial impressions upon hearing this album was, “I haven’t listened to Tomb Mold enough recently.” This evocation of an emotional response is so much more important than splitting hairs over sub-sections of a sub-genre.

Some of the other first impressions were more favorable. This whole album is drenched in reverb, and it’s used well. Additionally, simplicity and space are used as weapons here. While the members of Creeping Death showed that they have the ability to play complicated wankery with as much unit cohesion and precision as anyone, they don’t do this constantly. Some of their riffs are nearing AC/DC levels of simplicity. The upside to this is that they also near AC/DC levels of catchiness.

Wretched Illusions is not a melodic album by any means. But that didn’t stop the damn thing from getting caught in my head for days at a time. Even the most negative reviews of this album will have to admit that it makes a strong impression.

Unfortunately, none of the individual songs make an impression as strong as the album as a whole. The downside of doing simplistic riffs with lots of chromatic exploration and similar chugging on every song is that they start to all blend together. There are high moments and low moments on various tracks, but nothing that really pops out or makes any one track more memorable than any other. If you don’t like the lead single, there is not a lot of hope for the rest of the album either.

The vocals may be where the thrash influence shines the most. There is significant emotion in these roaring lines, much more so than in any of the more brutal competitors mentioned. Sure, most of the time the emotion expressed seems to be “death metal is fun as hell to scream about,” but that’s still something. Growling vocals can sometimes fall into the trap of sounding too monotonous, but Creeping Death excellently avoided this potential issue.

Between Creeping Death, Witch Vomit, and Tomb Mold, Creeping Death would probably not be my first choice, but it wouldn’t be my last choice either. The catchiness is there, the musicality is there, and the aggression is great. However, Wretched Illusions does not always rise to the heights of its competition, and despite the thrash elements present does not always do enough to differentiate itself from the crowd. Luckily, there is no divine force requiring that only one album per genre be listened to at a time. Wretched Illusions likely will not go down as the best death metal release of the year, but that is not where the line for good music is drawn. It’s still an enjoyable work that stays in your ear. Although it’s not necessarily better or more musically proficient than its peers, it is definitely a fun and memorable experience. Sometimes that’s all you want from an album.