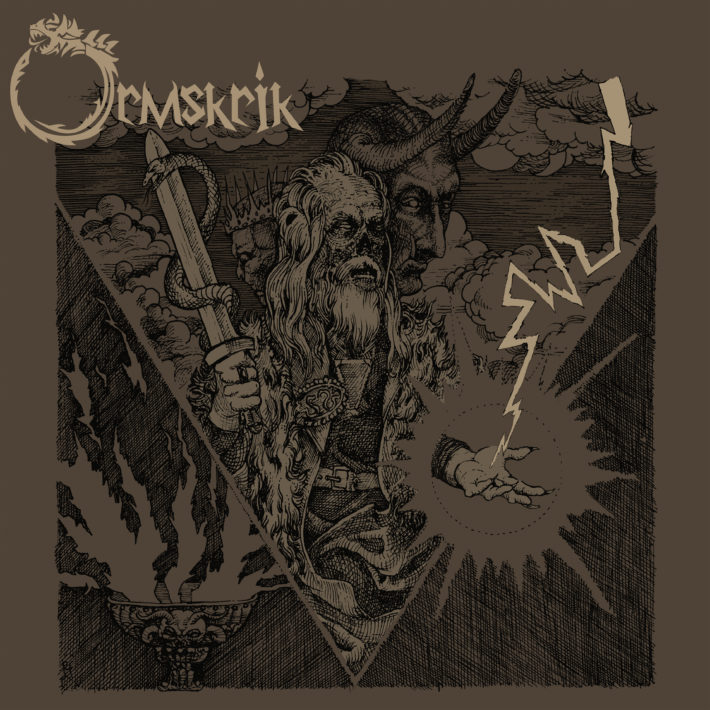 I once heard a rumor, and I’m unsure if it is true. The rumor goes that when a meth addict first goes to prison, the other meth addicts will surround that person and start licking them, hoping to get any last particle of their poison that they can out of the new person’s blood. I apologize if you are eating food currently. Whether or not that is true for meth addicts, it certainly feels like how I react whenever a halfway decent blackened thrash album is released.

Ormskrik is the self-titled debut album from a young group of Norwegian blackened thrashers. If you’ve listened to a lot of Skeletonwitch, you know exactly the type of sound that Ormskrik isn’t. Instead of aping the more popular bands, Ormskrik has opted to go with a more mid-paced, darker-sounding blend of blackened thrash. Mid-paced for this genre still speeds by, so there is plenty of energy, but this group seems more concerned with atmosphere than raw aggression. Surprisingly, atmospheric blackened thrash is not the biggest genre out there.

The first few tracks on Ormskrik are straight gas. From the opening riff on through, there is an energy that can only be conveyed when this particular trashy genre pairing is invoked. Even when there are slow and quiet passages, such as the middle section of “Destroyer of Worlds,” leave the listener with a sense of tension as they anticipate the inevitable buildup back to thrashing around. Think of the slow section in “Master of Puppets.”

One advantage that these starting tracks have is the simplicity of their riffs. Most of the riffs are only a few notes, slow, and intentional. All are repeated quite a lot. As a result, there’s a lot of room for growth, and for potential musical complexity to get out of the way in favor of the twisted atmosphere unique to blackened thrash. This is a band that knows how to stay out of its own way, and just let the listener have fun. It doesn’t matter if you’re impressed by their songwriting or technical abilities if you’re headbanging along and planning on playing the track again. The first third of the album accomplishes this perfectly, and all of the songs burn with the intensity of a glorious fire.

Unfortunately, by around the fifth track, “Descend to Madness”, that fire starts to lose fuel. Moreso than on the early tracks, Ormskrik start to experiment and add more instrumental sections to their sound. It just doesn’t work. There isn’t enough there to grab me, and even if those sections were up to snuff, it abandons the confident swagger of the beginning of the album. By the end things pick up again, but everything sags due to the middle tracks. This middle section isn’t bad, it’s just meandering and slightly lackluster after the great beginning that this release had. It’s also a clear area of potential growth for the band. Whether they end up strengthening their instrumental songwriting, tightening up their songs, or disappointing me, their next release is one I’ll be focusing on.

The small drop of blackened thrash that I managed to get out of Ormskrik has satiated me for now. I really, really enjoyed this album. Doesn’t mean it’s great. If you’re like me, and you’re willing to accept some flaws in your music for the genres that harmonize with you the most, this will be for you. Otherwise, I get the feeling that their next album will be their big breakout critical success, and this release will be seen as a flawed but important stepping stone. Feel free to come back in a few years and laugh at me for being wrong.