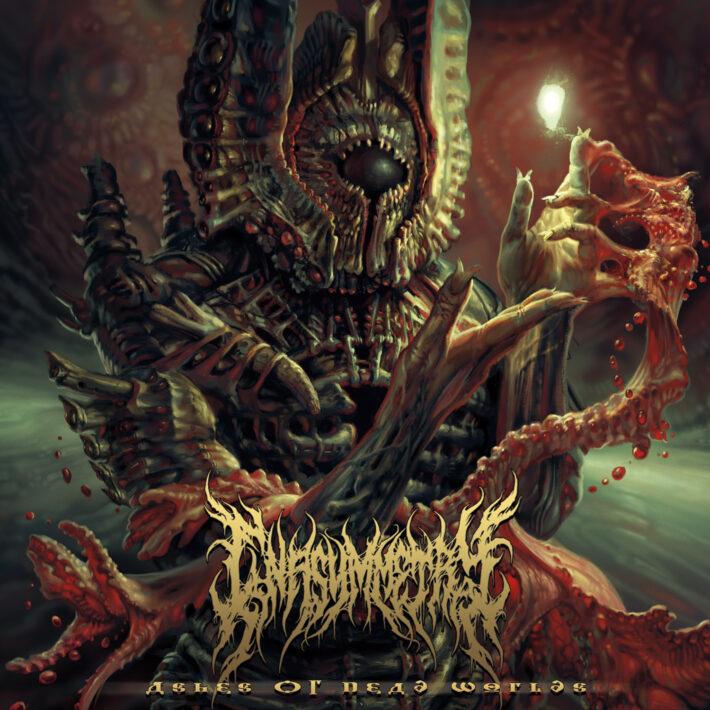 Technical death metal gets a bad rap. Too many bands relying on musical talent and not quite cutting it on the world stage. Still, there are some gems that come out every year. In Asymmetry, a young Chilean band, hope that they can break the genre’s lesser stereotypes and make a “bombardment beyond comprehension” that shows “bewildering complexity and staggering power.” Those are hefty descriptors, but In Asymmetry certainly gives it their all.

Ashes of Dead Worlds is In Asymmetry’s first release, which might surprise you as you listen to the album. Ths band’s soul runs older than its youth would indicate, with the drummer also playing for Deeds of Flesh and the vocalist performing with The Faceless. Their style starts aggressive and never lets up. The press blurb we got with the album calls Ashes of Dead Worlds “brutal technical death metal,” but this leans for closer to the previously mentioned bands than anything in the “brutal” camp.

Ashes of Dead Worlds immediately pummels the listener no matter what genre tag you give it. The record opens with a nice chant, but shortly kicks its sound into an aggressive, over-the-top version of death metal and doesn’t stop until the last notes of the closing Deeds of Flesh cover end (there is a quiet passage in the middle of “Forged by the Ancient Entity,” but it ends before you can catch your breath). In Asymmetry refuses to compromise even slightly. This drastic approach runs the risk of tiring the listener, but due to the album’s short run time and the band’s continuing enthusiasm, I felt hooked by Ashes of Dead Worlds the entire way through.

For a record this busy, the riffs stand out remarkably well. The variety probably helps. There are some nice stutters in the riffs in the opening tracks, and pleasing tempo changes scattered around Ashes of Dead Worlds. Given the brick wall of energy that In Asymmetry has given us, the occasional pauses in the riffs and the relentlessly mutating drum patterns both feel like a blessing. None of this would matter if In Asymmetry couldn’t write a good song, but the band members act like wizened death metal experts. Even through the solid sound that is this record, the tracks are uniformly interesting and engaging.

Drumming can make or break technical death metal albums. Darren Cesca succeeds. The fills go over the top when they need to, interspersed moments of silence provide breathers, and the machine-gun snares create chaos. Every performance on Ashes of Dead Worlds is all-in, and a misstep from any band member could have killed the record. Still, the drumming stands out.

There are no big problems with Ashes of Dead Worlds, but there are some little ones. Mainly that it feels safe. Death metal started as something ridiculous, with Seven Churches and Scream Bloody Gore both breaking ground in the realm of the uncouth. Technical death metal started in the absurd as well. Gorguts’ classic album Obscura expanded the realm of what death metal could be, and Cryptopsy’s classic None So Vile pushed the intensity of its predecessors to a breaking point. That’s the thing, though: those are all classic albums. Ashes of Dead Worlds is a comfortable take on generation-old standards. And while comfort doesn’t need to be bad in music, walking in the footprints of giants that came before you raises the question of if your impact will even be noticed. In Asymmetry executes a sound well, but they never own the sound. This doesn’t feel like a new record as much as it feels like a cover band of death metal standards. Charlie Parker With Strings, but featuring cargo shorts and pyrotechnics.

Ashes of Dead Worlds is worth your time. It never strays from dogma, but every musician proves competent and enthusiastic enough to make this record succeed where a similarly derivative band may have failed. Despite my issues, I had a blast listening toIn Asymmetry, and never got tired of listening to this accomplishment.