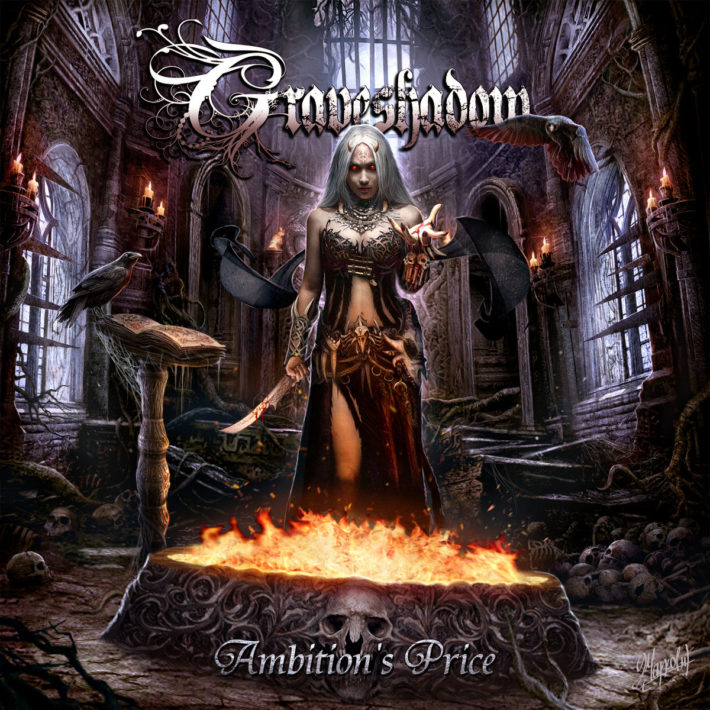 Power metal is a very hard sub-genre to get right.  If you try too hard, you risk sounding cheesy and will never be taken seriously.  On the other hand, if you play it too safe, the music will lack that epicness, that power that gives this music its name.  Graveshadow have found a comfortable place right between those pillars. Their music maintains that feeling of being grandiose yet isn’t too over the top that you feel like you just walked into Comic Con.  This is a great record with lots of great moments for fans of Nightwish and The Birthday Massacre.

“Doorway To Heaven” opens the album with keyboard line that reminds me of old Nightwish, back when they were more power metal than symphonic.  As the song progresses, other symphonic metal influences are noticeable, but not shamelessly ripped off. The clean vocals sound fantastic and elevate the song, but it is the harsh vocals that really stand out.  When they are wielded throughout the song, it doesn’t feel forced or misplaced. The Beauty & Beast vocal style has been somewhat overused since bands like Epica and Lacuna Coil have brought it to the spotlight, and if it’s not done carefully, it can seriously take away from an otherwise decent song.  Such is not the case here, and every time the harshness joins with the music, it is a smooth transition. Good job to the band for being conscious of this.

“Widow and the Raven” was released ahead of the album with a lyric video, and it showcases more symphonic elements from the band.  The strings that accompany the vocals on the chorus give a somewhat gloomy feel to this quick-moving song. The vocal style is mostly clean on this track and shows that the band is mature enough to not overuse harshness to compensate for a “heavy” feel.

The title track slows things down after two great songs. The intro riff sounds like it could belong in a doom metal record with its slow tempo and somber feel, and this adequately supports the contemplative lyrics about whether ambitions are worth their price. This is well written, but after a while, it begins to feel like it drags on.  It doesn’t need to be any shorter, but it could benefit with another idea or two.

“Hero of Time” is one of the catchiest songs on this records.  Its quick tempo and melodic vocal delivery make it a song you wouldn’t mind having stuck in your head for a while.  It may be the shortest song on the album, but from the choir-like intro to the excellent guitar solo in the middle and the key change at the end, there is a lot going on.  Short, sweet, and to the point.

Moving to the back half of the album, “Return To Me” is another little treasure.  This is where the band really shows their gothic side. The opening piano line sounds like the lovechild of Evanescence and The Birthday Massacre.  The song itself has the down-to-earth feel of a ballad, yet doesn’t feel like it’s dragging its feet. In terms of dynamic range, it’s a rather simple song, but it just keeps a steady flow throughout, which makes it a welcomed change of pace and a nice song.

“Slave”, “Liberator”, and “Warchief” form an epic trilogy of songs towards the end of the album called “Call of The Frostwolves”.  While many of you might recognize this instantly, I did not and I had to do a little research. It turns the title and story are inspired by World of Warcraft.  I know next-to-nothing about WoW, but if feels anything like these songs, then I’d say it’s a pretty awesome game. “Slave” opens the saga with a mid-tempo triplet groove, but its defining feature is the chorus that will have you yelling “No longer slaaaaaave” by the end of the track.  “Liberator” picks things up and is the heaviest of the three parts.  It definitely feels like a call-to-arms, with the harsh vocals taking the primary role.  At times, it sounds as if there are a little snippets of black metal dissonance interlaced here and there.  “Warchief” is the perfect way to finish off this series; it’s fast, aggressive, and heroic. Victorious lyrics and soaring melodies, it leaves your blood pumping by the end.  And for all you WoW players, the final line is “for the Horde!”

All in all, this is an fantastic album.  There is some incredible song writing going on, and they know how to blend Beauty & Beast vocals without it being forced or cliché.  There is some room to grow though. In literal terms, there were some moments where I wished there was more; more intensity, more feeling, and more sound.  And while they do some things very well on this album, it’s not exactly new. But that is not a bad thing. Something that is familiar and performed well is better than something new but executed poorly.  Overall, an excellent release.