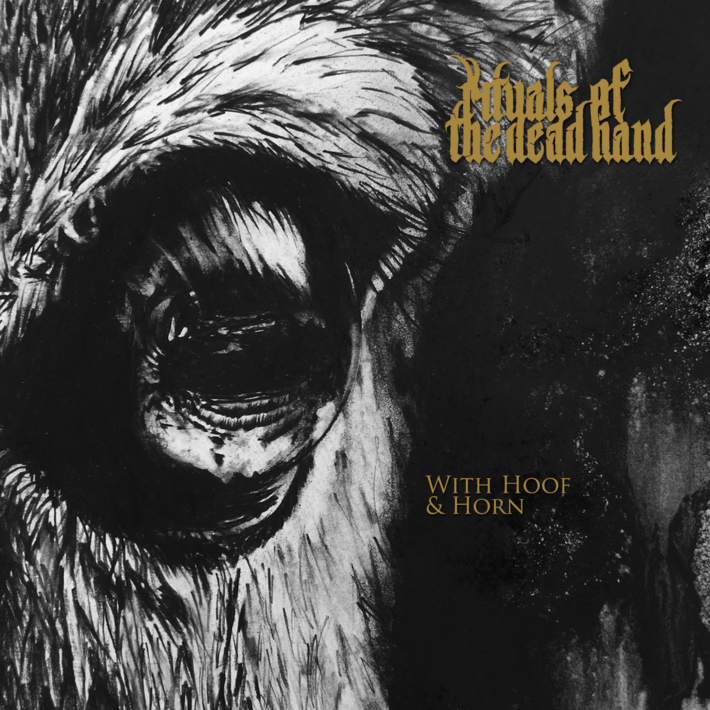 From the North of Belgium comes Rituals of the Dead Hand, a black/doom metal band featuring members of instrumental post-metal band Hemelbestormer. Back in 2018, the trio released their debut album, called Blood Oath, and last Saturday, May 1st, they presented their next offering: a full-length called With Hoof and Horn. The band says they are inspired by old school extreme metal, while pursuing a modern sound, and they succeed in that, especially in their modern production.

Rituals of the Dead Hand are inspired by the Buckriders: gangs of robbers who roamed the borderlands between Belgium, Germany, and The Netherlands in the late 18th century. The story goes that they had sold their souls to the Devil, and rode on the backs of flying goats, mercilessly pillaging and burning down villages as they passed. On this new record, the band once again explores the tales about the robbers who were caught, tortured, trialed, and executed.

With Hoof and Horn starts with a dissonant intro that quickly establishes the mood of the album. After about a minute, it seamlessly flows into Sulphur, the first full song. The guitars play an ominous riff, and the drums build up the tension until the track really kicks off. The droning guitars bewitch your mind, capturing you in the musical scenery. After a few verses of grunting, the grunts get replaced by stately chanting, reinforcing the 18th-century vibe even more. So as not to get monotonous, the band changes the theme multiple times throughout the song, passing from clear doom vibes to more black metal-inspired sections. Near the end of the track, there’s even strings in the background, making for a powerful, bombastic ending.

The following track, Inception, starts off with an especially dissonant riff, with intense drumming in the foundation. The vocals emphasize the distress expressed by the rest of the instrumentation, switching between guttural grunts, and more melodic passages that are somewhere in between grunting and singing. As with Sulphur, there’s various changes in musical motifs, creating some diversity, while still maintaining the atmosphere over the whole track.

The Defiling Days is a track that especially tends toward doom metal. The slow, heavy riff on guitars is emphasized by the drums, carrying you along as the track progresses. The chanting, which is also present on this song, gives the music an extra bombastic feeling, really accounting for the “Rituals” part of the band’s name. On Vuurstaeck, the album’s final and longest track, the use of samples especially comes forward. For example, there’s sounds of the fire of the pillaged villages, and even moans and screams of agony toward the end of the track, leaving you in discomfort after the music stops.

In conclusion, Rituals of the Dead Hand have created an impressive record. The captivating guitar riffs, emphasized by the drums, are great to bang your head to, and the overall heavy sound of the band would work very well on stage. “Less is more” definitely goes for With Hoof and Horn: the riffs are relatively straightforward, which makes them extra powerful. So if you’re into doom and/or black metal, do yourself a favor and check out this album.

Click here to visit Rituals of the Dead Hand’s Bandcamp