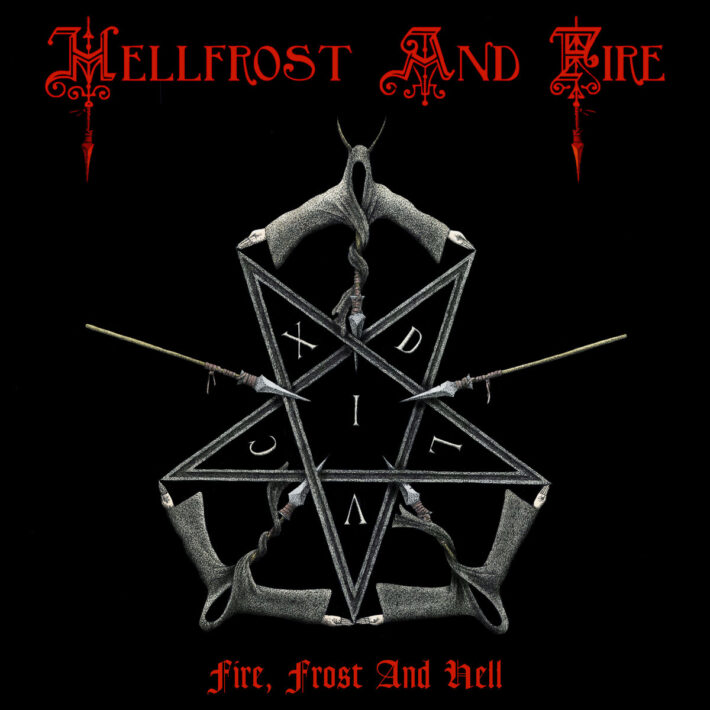 The first sign that something’s amiss is the album title. Clearly it’s a rearrangement of the words from the band name, but that’s pretty redundant, isn’t it? Why not just do a self-titled? What even is a “hellfrost” anyway? Wouldn’t “Fire, Frost, And Hell” with the Oxford comma read better? Also what is it with bands capitalizing every word in their names/titles? I’m getting distracted. Regardless, it bothers me. And as luck would have it, the music does too.

Pressing play, it’s immediately apparent that this record has some problems. The most obvious being the production. The drums sound weak, muffled, and distant – as if they were recorded from the other side of a wall. Guitar, bass, and vocals dominate the mix, but they don’t fill up the space – it always sounds like something’s missing. The increased scrutiny is especially detrimental to the guitar. It’s too prominent, and the distortion isn’t great. At times the riffs sound so hollow you’d think it was just a single guitar track. The bass is loud, but there are no interesting bass parts; it mimics the guitar almost exclusively. Dan Ingram’s vocal performance is average overall, rarely venturing beyond a mid-pitch growl. His vocals are placed too high in the mix, and often times you can understand his lyrics, which are also unremarkable. Dave said in an interview that he wanted “something that had the feel of those old tape trading days, but with the necessary clarity”, and I’m hearing precisely the opposite: sterile and lifeless production all around.

The second most obvious problem is the writing. This entire record is painfully bland. Riffs are repetitive and generic, and there is no lead guitar whatsoever. Aside from the guest solos (which are the most interesting parts), there is only ever one melodic idea happening at a time, and those ideas are almost always dull and predictable. There are very few guitar harmonies, no leads, no counter-melodies, and no unique bass parts. The drum performance is actually decent, if only it was more audible in the mix. Judging by the Photoshop band photo, I have to assume these guys wrote and recorded this album remotely, and it really shows. Most of this album presents as an uninspired and uncoordinated attempt to sound like Bolt Thrower, and not even Ingram’s veteran experience can save it.

But despite all my complaints, this isn’t a terrible album. Musically this is miles better than most of Six Feet Under’s discography, and production-wise it sounds better than the last Morbid Angel record, for instance. Of course, that’s a pretty low bar, but it goes to show that it could always be worse. And after all, there are some positives. The guest solos from Scott Fairfax are cool, especially the one on “Meridian Acquisition”. There’s a cool riff at the start of “Debris Wrought From Winter”, and “Sonance Of The Swords” has some nice vocal lines. And thankfully this record is a manageable 41 minutes. Despite its banality, the record has some energy. The performances aren’t bad, but it’s marred by production oversight and an apparent lack of effort. A simplistic and generic record isn’t necessarily a bad record, but certainly isn’t a good one either. Fire, Frost And Hell had the potential to be a decent album, but carelessness sank its ship.