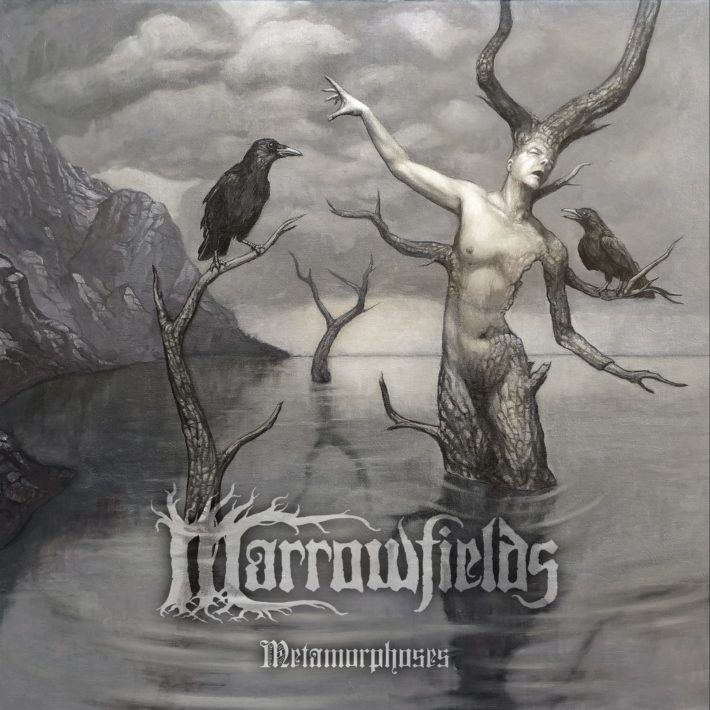 Figuring out what matters is not an insignificant task in any aspect of life. From the gargantuan to the trivial, sorting through the muck takes time and effort, but it’s also too essential a task to skip. On Metamorphoses, the debut album by Massachusetts-based band Marrowfields, I was struck by how little I cared about flaws present in the listening experience that would usually turn me away from an album. What made Metamorphoses downsides more forgivable than those of its peers? Time to dive into the muck.

Metamorphoses is an atmospheric epic doom metal album with all the baggage that bestows. Everything is long, slow, murkey, and deceptively heavy. Marrowfields thread the line between crushing and beautiful as the genre demands. When forced to choose between the epic, doomy, and atmospheric elements of their sound, Marrowfields almost always place the atmosphere first.

There are some major downsides to Metamorphoses, and although they did not affect my listening experience significantly, it’s best to be aware of them at the start. First, the album is way, way too long. Many atmospheric metal albums fall into this trap, but this doesn’t excuse a new instance of this failing. The five tracks Marrowfields have given us average around ten minutes each, and they do not deserve that combined length. No individual song lasts too long, rather, the tiring effect is cumulative. It didn’t really hit me too hard while listening. Despite the excessive length, the music works well as background music (as atmospheric music is supposed to, but rarely does), meaning that I was able to have this on while improving the experience of whatever else I was doing. I am aware that “this album is good if you’re not paying attention to it” is not high praise. But the raw truth is that the length of Metamorphoses, which usually would be a damning flaw, just didn’t bother me while the album was playing.

The promo material called this atmospheric doom metal with an addition of “dreamlike black metal,” but that doesn’t quite describe the sound correctly. At times, especially on “Birth of the Liberator,” Metamorphoses draws as much influence from Gamma Ray as it does from Agalloch. Brooding, epic doom metal and cheesy, shirtless euro power metal seem like they should go together about as well as a national pandemic and a government that doesn’t guarantee healthcare to its citizens, but it somehow works out in the end. The music, that is. The power metal influence is more of a ghost than anything, and if it was more prominent there would probably be a bigger problem. As is, Metamorphoses manages to appeal to my inner dungeons-and-dragons-loving self without compromising the dark nature of epic doom metal. This doesn’t seem intentional, but it still raises the album in my eyes.

Metamorphoses is a flawed album. But the flaws never dragged it down for me. There are many people who won’t find the length and indulgent sameness permeating the record as forgivable as I do, but those that do will find a fantastic, emotional experience. I hope that Marrowfields next release can improve on the excellent start they have here, but until that happens Metamorphoses will continue to bring enjoyment to many people.