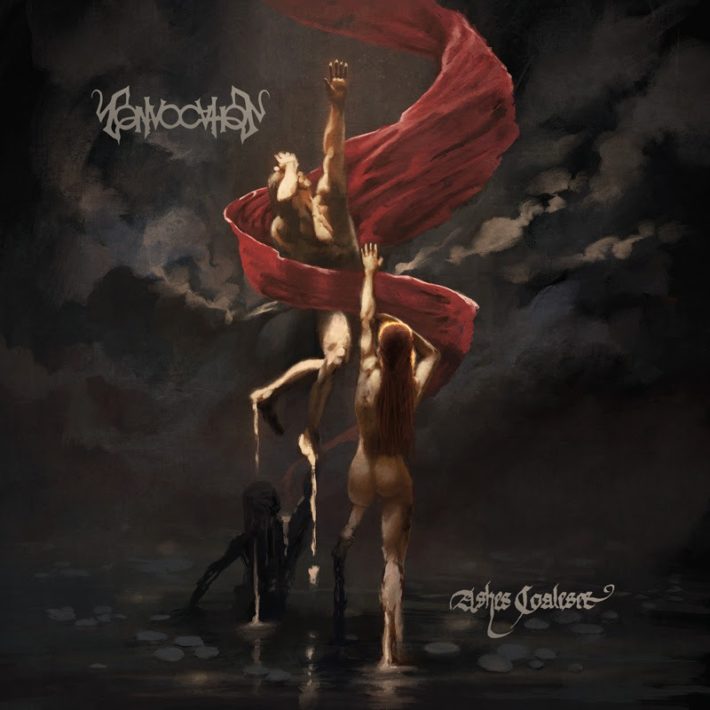 Just when Bell Witch and Aerial Ruin released their long-awaited collaborative album and funeral doom fans all over the world thought it couldn’t get any better, it turns out there’s even more to be excited about. Although not as popular yet, Convocation definitely deserves to be up there among the genre’s household names, for their new album, called Ashes Coalesce, is a true work of art.

Convocation is a Finnish funeral doom / death metal duo, founded by L. Laaksonen, from death metal band Desolate Shrine, and M. Neuman, mostly known from Dark Buddha Rising and Waste of Space Orchestra. Laaksonen is in charge of all instruments and Neuman takes care of the vocals. They formed the band back in 2013 and released their debut album, Scars Across, about two years ago. It was received very positively. This Friday, Convocation release their sophomore album, Ashes Coalesce, a four-track, melancholic masterpiece. The band described the album as “an aural study of concepts encircling death: grief, rage and defiance, melancholy, acceptance and fear and anxiety of the unknown.” Even though you shouldn’t judge a book (or an album) by its cover, this baroque-style painting brilliantly is the perfect bridge between the lyrical concept and the music.

After a relatively quiet, ominous intro, the first song, Martyrise, abruptly explodes into full aggression. The main rhythm is slow-paced, with heavy cymbal hits between each beat. In the background, there are some dissonant guitar riffs that create a lot of tension in combination with the (much slower) main guitar melody. Neuman’s vocals are really impressive as well. The man must have the lung capacity of a whale, for his guttural grunts, full of agony and grief, seem to last forever. Before the music gives you the outside chance to get bored, the rhythm or melody will have changed already. In that sense, the music is really progressive. It keeps changing throughout the album, taking the listener along for the journey encircling death. The Absence of Grief starts with another really heavy riff, that works together perfectly with the drums. Not only do these accentuate each note in the guitar melody, they also fill up the empty spaces in between them. Neuman reveals that he can do more than deep grunts, for there’s also shrill shrieking, laying bare another kind of pain. About halfway through the song, he progresses into a cleaner, more chanting-like voice, and he gets accompanied by a female voice that only appears for a short time, but will play a larger role in the next song. Just when you think the music can’t get heavier, the drums become blast beats, the chords seem to keep ascending and there’s an actual choir accompanying the already layered voices, proving that it can always get more intense.

Even after such a climax in tension, the duo succeeds in keeping the music’s energy level high in the next song, Misery Form. After a gradual buildup, the female voice comes back with multiple voices in the background, adding layer upon layer to the already haunting atmosphere. The band gives you no time to breathe, for shortly after, Laaksonen plays new, dissonant guitar riffs over Neuman’s hellish screams. The whole record is like a ritual to which you’re subject, experiencing the same grief and anguish that the duo is exploring. Ultimately, the album’s final song, Portal Closed, brilliantly functions as an outro to the whole album. ‘Only’ lasting about eight minutes, it’s the shortest track of the record, and unlike the other songs, the tension actually decreases as it nears its end. It’s as if the portal of melancholy is really closed and all that’s left is acceptance: the atmospheric remains of the musical rage that was Ashes Coalesce. After the distorted guitars have been replaced by ambient organs, there’s a duet between a clean guitar and a piano, portraying the harmonic ending of something that everyone will eventually experience at some point in their life.

In conclusion, Ashes Coalesce is nothing short of a masterpiece. The melodies work together perfectly to create a haunting atmosphere, and the drums are brilliantly balanced between emphasizing those melodies and filling up the space between each note. Because Laaksonen takes charge of all instruments, Neuman can focus on the vocals, and these too, are expertly composed. There’s guttural grunts, shrill shrieks, and a wide array of voices: male, female, and in form of a choir. Throughout the record there are so many wow-moments, that it really leaves a profound impression. So if you’re into funeral doom and you’ve been looking for a follow-up to Bell Witch, Convocation won’t let you down.