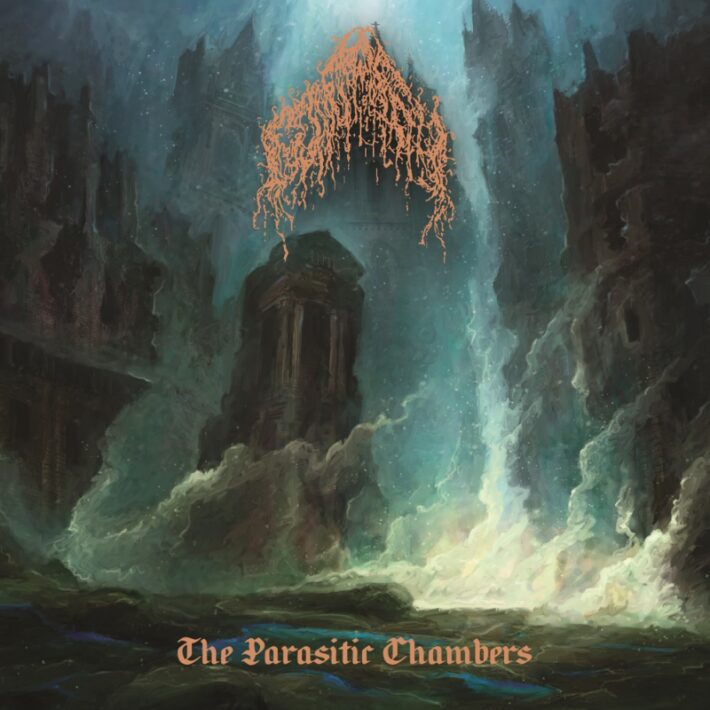 Conjureth are a relatively new death metal band out of San Diego that burst onto the scene with two demos in 2020 and a debut record in 2021. Consisting of members of Encoffination, VoidCeremony, Ghoulgotha, and others, this band sees veteran death metal musicians combining their strengths to forge the ultimate death metal record. I thought their debut album was a competent and well-done execution of a cacophonous OSDM sound, and I may have even underrated it at the time. But Conjureth have returned to kick 2023 off with a bang.

Conjureth’s sophomore album The Parasitic Chambers blows their debut album out of the water in every respect. This experienced band play a surprisingly unique style of death metal, towing the line between the cavernous style of Incantation, the blasphemous style of Immolation or Morbid Angel, and the cacophonous sound of riff wizards like Hyperdontia. Conjureth create a massively dense wall of sound with their unyielding intensity and their technical proficiency. And at a stark 38 minutes, this record rips your face off and wastes no time doing it.

The calling card of Conjureth’s sound are their angular, spider-like riffs that seem to dash impossibly around the fretboard. The Parasitic Chambers features less riff repetition than on their debut, giving the listener a feeling of desperation and uncertainty. Crushing riffs will bash the listener over the head, while rhythmic barks drive straight into your skull. It’s not all directionless shredding, though. Many of the tracks still have a central theme (I hesitate to use the word “chorus”) that it centers around, with stingy repetition that never undermines its hard-hitting effect. Many of their motifs are memorable earworms that aren’t exactly “catchy”, but they make you want to re-experience the punishment this record has to offer as soon as it’s over.

The texture of this wall of sound is reinforced by the remarkable drum work, which avoids feeling robotic through syncopated accents and a subtly imperfect precision. It’s hard to explain, but sometimes it feels like he’s about to trip over himself. Not so much so that it feels off-time, but enough to give the fast sections a subtle feeling of human desperation. (See if you can hear what I mean on the song “Deathless Sway of Torsos Calm”). Obviously, he’s an incredible drummer, and I wonder if this subtle imprecision may have even been intentional. Even if it wasn’t, it still isn’t a detriment to my ears, as this entire record maintains a visceral energy as a result.

Syncopated full-band hits introduce an irregularity to the songwriting that many death metal bands could never or would never pull off. This in conjunction with some of the most impressive angular riff writing in modern death metal amounts to a technical (yet not tech-death!!!) album that will impress and brutalize you on every spin.

Conjureth have made a truly great record here, and while I may be too much of a coward to give it a 9/10 right off the bat, I can assure you The Parasitic Chambers will be waiting for me at the end of 2023. It’s THAT good. In fact, if this album came out in 2022, I would have had it in my top 5 without hesitation. But instead, it’s here to victimize every other death metal band releasing their albums in 2023, because this is the standard to beat.