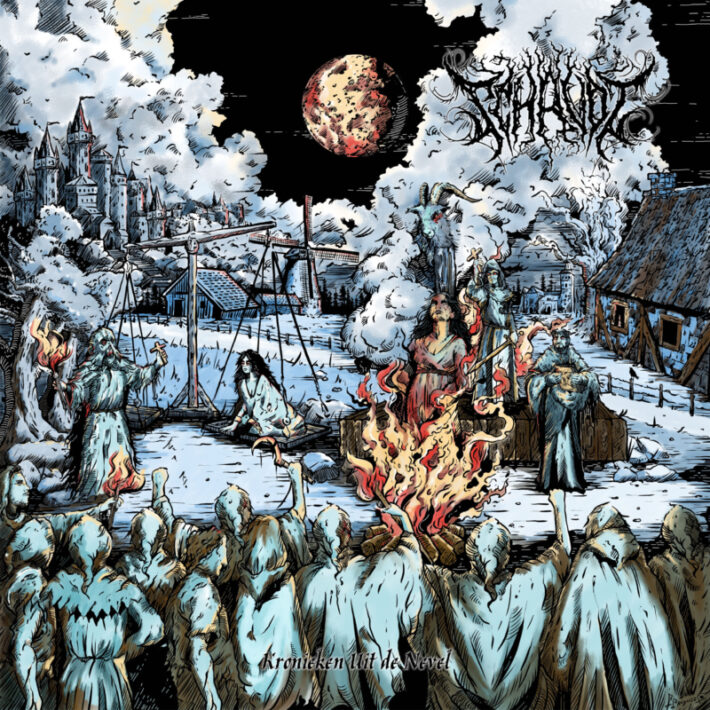 The Dutch black metal scene is one that balances between tradition and innovation. On the one hand, there are bands who prioritize creating new sounds and atmospheres over reproducing an established black metal sound, and on the other hand, there are bands that stay more true to their roots in the second wave of Norwegian black metal and write new music in the same vein as their predecessors. This way, there’s something for everyone in the scene, whether you like classic or more experimental black metal, or something in between.

Schavot, a one man project from the South East of the Netherlands, releases music that’s more loyal to the founders of the genre. With its energetic, raw black metal sound, accompanied by bleak synths, Schavot reminds bands like of Emperor, Satyricon and Ulver. The project was founded in 2021 by Floris (who is also a part of Asgrauw, Meslamtaea and Sagenland), upon the release of its debut album Galgenbrok. The debut was received with critical acclaim and a little over a year later, this Friday, January 27th, the project’s sophomore full-length Kronieken Uit de Nevel (Chronicles from the Fog in English) will be released. The album is inspired by Dutch history and folk tales, and Floris wrote, recorded and produced everything by himself in his home studio, which makes the album’s quality all the more impressive.

Those who are familiar with Asgrauw, which has been active in the scene since 2010, will definitely hear some similarities between the two bands, especially in terms of composition and atmosphere, but Schavot still has unique qualities that distinguish the project from Floris’ other bands. The sound, for instance, is a bit more raw, the synthesizers are more prominent (they play an important role in shaping the atmosphere of the music), and the performance of the instruments and the vocals also contribute to Schavot’s authenticity.

The album starts off with a female-vocal-sounding synth under a compelling black metal riff. Despite its roots in early nineties black metal, the recording of the instruments as well as the mix are of good quality. Each instrument can be discerned separately, while together still sounding like a coherent whole. Instead of one riff that’s repeated throughout the whole track, there’s actually a kind of ‘narrative arc’ in the melody, which engages the listener and takes them along to the Netherlands, a few centuries back. Another aspect that creates variety, on the opening track as well as on the others, is the rhythm section. The drum patterns often change, putting emphasis on different parts of the guitar riffs and thus recontextualizing them, which brings about that even when a riff is repeated for a while, it stays refreshing and keeps the listener engaged. The grunts are full of energy and they get alternated with a type of aggressive spoken word. As mentioned before, the atmospheric aspect of the record is mostly brought about by the synths that play in the background, adding an extra layer to the music. Little time is spent on tranquil introductions, so those who like energetic black metal will definitely appreciate this record.

In short, Kronieken Uit de Nevel is a well-performed, uncompromising example of Dutch black metal. The album is heavily inspired by the second wave of Norwegian black metal, while still having a personal sound, composition and atmosphere. It maintains the initial level of energy throughout the whole record, making sure to keep the listener hooked until the very end. If you’re into traditional black metal, but you still want to hear something fresh, be sure to check out Schavot.