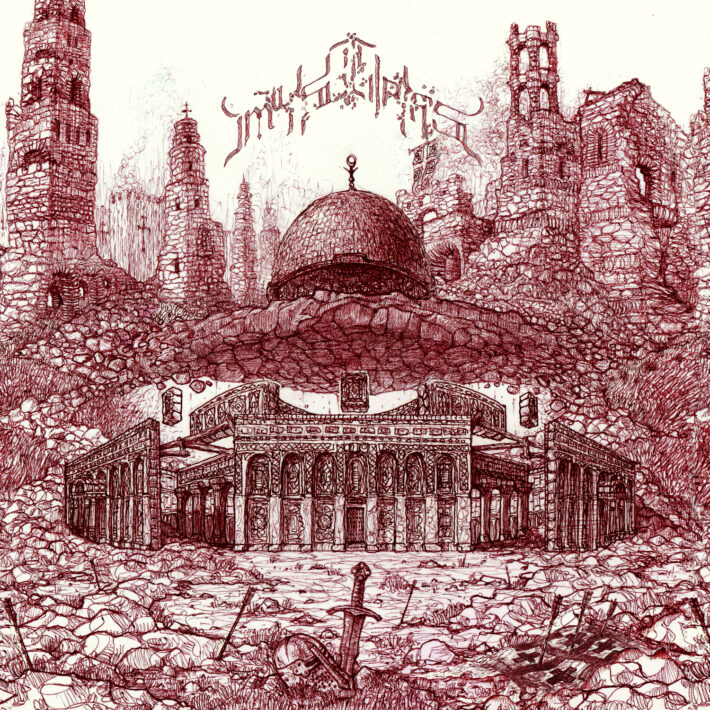 Mystras is a one man black metal project by a guy named Chris, better known as Ayloss, better known as Spectral Lore. Much like Spectral Lore, Mystras has long-form atmospheric black metal as its core. Mystras released its debut album Castles Conquered And Reclaimed last year, and although the album hasn’t stuck with me as much as some of Ayloss’s other work, it had its charm. This prolific artist has returned just over a year later with a second Mystras record, Empires Vanquished And Dismantled. Ayloss’s output has been stunningly abundant over the past few years. In addition to these two records and two full-length albums-worth of material under the Spectral Lore banner, he kept himself occupied with other endeavors such as the sort-of dungeon synth project Ontrothon. With Ayloss releasing enough music to sink a planet, he has to create a bad album sometime. Right?

This album differs from the man’s other bands in a few key ways. First, the prominent presence of a ney, or old middle-eastern flute-like instrument. Second, rather than mix ambient and black metal passages in various proportions, Empires Vanquished And Dismantled instead has a clean split of black metal tracks (five of them) and middle-eastern-inspired folk tracks (the remaining four). Third, Mystras plays both genres straight, with little to no ambient side-tracking. Castles Conquered And Reclaimed veered closer to raw black metal than I’ve ever heard from this artist, but on Empires Vanquished And Dismantled this approach has been completely abandoned.

Before I continue to tell you about this music, I can’t ignore the importance of Ayloss’s lyrics. The man has a lot to say. I don’t usually focus on lyrics in reviews, partially because I can’t understand them and partially because they don’t affect me the same way the music does, but if you’re at all interested in artists that help you know the world a little better, you can’t go wrong with this man’s projects.

Empires Vanquished And Dismantled seems more melody-focused than the previous one, and as a result the tracks from it have been rolling around in my head since I first got the promo. The melodic lines use repetition to keep the listener from wandering off too far into the ambience of the album, as sometimes happens in Spectral Lore releases. Within this repetition, Mystras changes up small details, such as the syncopated nature of the main trill in the track “Ah Ya Zein.” These changes keep the music fresh and result in a rich, rewarding environment.

This wouldn’t matter if the melodies themselves were boring. They’re not. Pretty much every song, black metal or not, has something that sticks in my brain, or at least that would stick in my brain if the next song didn’t waltz along and displace it. Ayloss is an accomplished songwriter, and he brings his full creative talent to Mystras. I don’t know how he still has all of these great ideas after at least five albums of music in the past two years, but I’m not going to question it.

What I will question, however, is the editing. “The Fall Of The Kingdom Of Jerusalem” is the best song on the album, but it didn’t need to last for over fourteen minutes. “Cheragheh Zolmezalem (Oppression’s Fire)” has fascinating moments where the ney and voice bounce off of each other and blend like oil and water, but the song’s length could have been cut in half and nothing would have been lost. Either of the final two tracks could have been cut with no negative effect. I felt thankful whenever this record ended, and that’s not the response that I think any artist desires.

This editing issue isn’t new.In fact, it was a huge problem with the newest Spectral Lore release as well, and one reason I haven’t returned to that record as much as I have other records of similar quality. I wish Ayloss would partner with other artists more often, so that they could either reign him in or help him explode farther. It’s no coincidence that my favorite release of his from the past few years was the Wanderers split with Mare Cognitum. That release had such a gigantic scope that it broke through the tiring barriers that confine album lengths and became its own experience. Empires Vanquished And Dismantled hasn’t done that.

Mystras continues to be a unique project, and Ayloss continues to put out quality work. I wish that this album had been trimmed down some, but still enjoyed every listen of Empires Vanquished And Dismantled. Fans of Spectral Lore and atmospheric black metal in general should flock to this album. Fans of metal with unique instrumentation should listen to this as well. Even though Ayloss may reach his creative limit sometime, it sure hasn’t happened here.