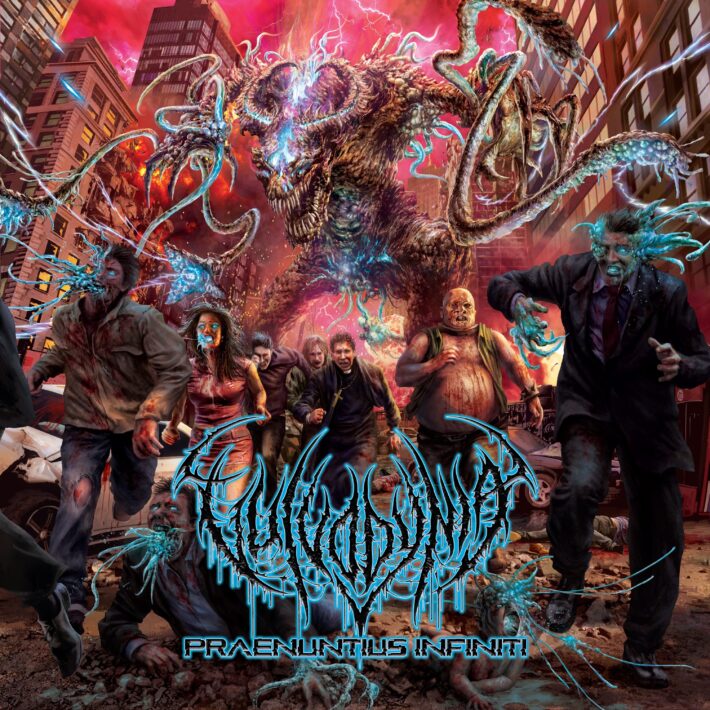 Fans of South African slam/brutal death metal group Vulvodynia may notice a continuing sonic shift emanating from the band. Praenuntius Infiniti continues and completes the storyline from their 2015 EP, but the band has moved on from the over-the-top slam that used to be their gory playhouse. This release focuses more on technicality and melody. It doesn’t stray too far, the slam roots of the band are still blatant and apparent, but the passage of time cannot be ignored.

The move away from brutality works out well, but still leaves me feeling wanting. The larger-than-life energy drew me to Vulvodynia in the first place. Without it they sometimes feel like just another death metal band, or at times like a particularly adept Archspire cover band. Check out “Banquet Of Enigmatic Horrors Part 2” for that effect. Throughout Praenuntius Infiniti, I find myself searching for who this band is trying to present themselves as.

Regardless of any identity crisis, Vulvodynia still know what boxes to check. Even as I give existential questions about Praenuntius Infiniti, the band creates entertaining music. I didn’t find any of the riffs and choruses too memorable, and any melodeath influences present didn’t translate to catchiness. This record still impressed. Vulvodynia have created heavy and energized music, with plenty of impressive pieces.

Praenuntius Infiniti is less about the songs and more about the experience of the whole record. This means that the record doesn’t really have any slow moments, but it also means that individual songs lack identity. I didn’t mind this too much when listening, but it does mean that the songs start to blend together, outside of the Archspire cover band moments. Although eventually even those sometimes start to work in tandem. Additionally, that makes Praenuntius Infiniti lose steam as it nears its conclusion. As more of the same snowballs into more of the same, the tracks lose meaning and I stop caring.

Despite that, the whole record experience is worth it. Vulvodynia haven’t forgotten who to write nasty, chunky death metal. It isn’t the riffs, although they are fine outside of a few unfortunately-placed squeals. it isn’t the vocals, although they are fine as well outside from a few unfortunately-attempted tonal variations. None of the other instruments really blow me away either. Instead, the band runs like a corpse-grinding machine. I was a bit worried when I saw melodeath mentioned in the promo blurb, but I shouldn’t have been. This album sounds like a tiger tried to put on a top hat and groucho glasses to pretend that it’s a zebra. No matter how they try to shift their sound, the band’s excessive and insane core thankfully remains.

There’s been a lot of death metal released this year. Vulvodynia falls into an intriguing place. Due to their pseudo tonal shift, they don’t fall in with other slam bands, and due to their brutal death roots, they out-heavy the high-flying tech death bands. They don’t blow out bands with incredible songwriting, and they don’t play cavernous death metal. They don’t feature the levels of gore and excessive violence that once seeped into their music, but they still have enough to keep the listener on their toes. All of this combines to make them seem like a heavier Cannibal Corpse, but that feels wrong and doesn’t account for the slam influences. Maybe their approach to death metal gives Vulvodynia a chimeric quality. Maybe they’ve expanded their sound just enough to give any listener a little of what they want, just enough to have them listen again.

And maybe not. In any case, Praenuntius Infiniti presents a band stuck in transition, but one that still can create an enjoyable record. The band still hasn’t made a standout record, but at this point they have a long enough catalog to show that they know what they’re doing. I’ll continue to pay plenty of attention to them, and if you’re looking for death metal that’s on the brutal side, then you should too.