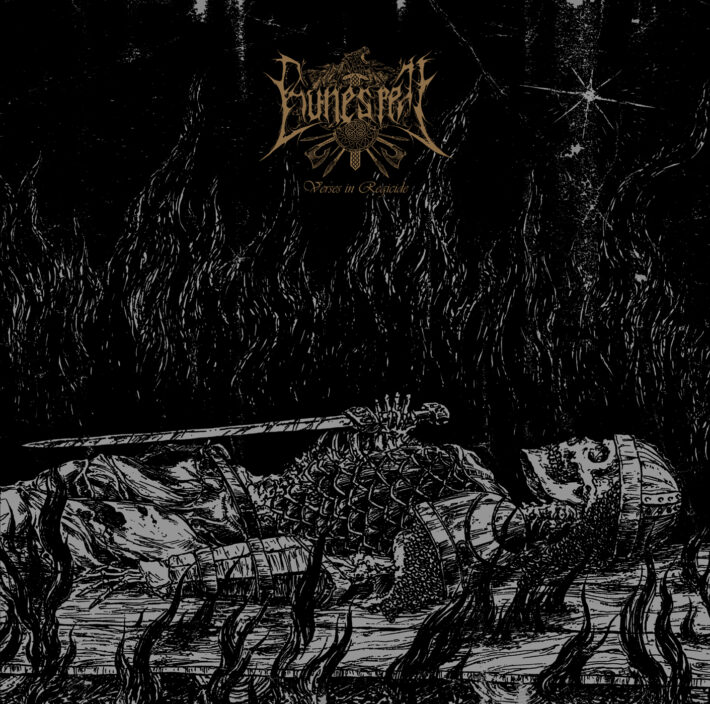 While small followings are status quo for most black metal bands, there are some that seem criminally underrated even among this sparsely populated scene. After reviewing Order of Vengeance in 2018, and now listening to Verses in Regicide here in 2021, I believe Runespell is among those that deserve a far bigger following. The composition, the execution, the sheer quality of music coming from this Australian-based band is undeniable.

Perhaps it’s because I’m neck deep in the Malazan Book of The Fallen series by Steven Erickson (highly recommended), because this medieval-tinged black metal has found the sweet-spot between melancholic and epic, weaving a tale in a landscape painted by the raw and unrelenting old-school atmosphere that is Verses in Regicide. “Structures of Collapse” is an excellent opener for the album, and is an excellent gateway for those unfamiliar with Runespell. It’s melodic and raw, and moves along with a pace fit for a battle, with the outro conveying the inevitability of collapse. “Vengeance Reign” slows things down to a march, as if on traveling to an unknown destination with a sense of dread. “Realm of Fire” showcases Runespell’s thrash influence in the first half, then transitions into a triplet-rhythm make the track feel more open and epic, then back to the thrash section. Initially, it felt out of place, but repeated listens changed my opinion.

“Into Dust” and “Windswept Burial” bookend the second half of the album, and it feels like they start and end an epic told through the tracks between them. “Tides of Slidhr” is the longest track on the record, clocking in at over nine minutes and somehow never feeling like it was that long. I often found myself looking up in surprise as the song concluded; I was even more surprised by the fact that despite its repetitious nature, it never felt old or worn out. “Shadow’s Dominion” provides some solid headbanging material with its main riff, utilizing the heaviness of the track to enforce the “dominion” in the track’s title. Compared to the rest of the album, this one does feel the weakest; unlike the track prior, I found this one to drag on a bit.

Despite the raw black metal influences, Verses in Regicide is melodic in nature. If I remember correctly from my previous reviews of their material, this has always been the case, and I am here for it. Little melodic riffs, such as the ones found in the outro of “Structures of Collapse” or in the verse of “Realm of Fire” showcase the skill of Runespell’s lone member, Nightwolf.
These one-man black metal projects will never cease to amaze me, as its not just his skill with the guitar is evident, but also the drums. Nightwolf gives a tighter performance behind the kit than some bands with a dedicated drummer. He has a vision and has crafted it without compromise. Not to mention the quality of recording has significantly improved since the first time I heard Runespell. There is more clarity among the instruments, yet still preserving that the raw quality.

Since I reviewed Order of Vengeance, I somehow missed Voices of Opprobrium, but caught the split done with Forest Mysticism, Wandering Forlorn. While I work to rectify that, Verses of Regicide is an assurance that Runespell continues to improve and impress with each release.