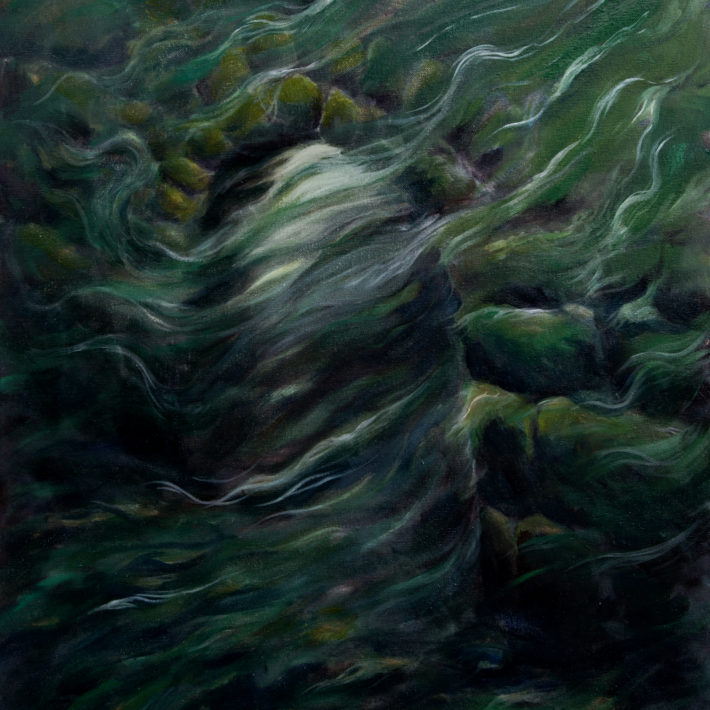 In death metal, people often sing about the things that happen as time progresses just before and after the moment of death. While Barús lyrically definitely meets this criterion on their new record Drowned (as the name already suggests), they take the ‘progress’-aspect even a few steps further, for they’ve created an awesome progressive death metal album!

Some of the things that stood out to me after listening to the album a few times are the composition of the individual songs, which is done very well, and the way the band creates dissonance. In the composition, we can really see the progressive aspect of the music. In almost every song the rhythm, tempo and/or time signature is changed at least a few times before the end. There’s a lot of odd time signatures and unusual rhythms that alternate with really groovy music in a regular rhythm, showing the band’s skill in playing both technically challenging music, as well as music to headbang to. A great example of the band’s skill in composition is the song Dissever. Almost every aspect of the music changes throughout the song, and even though everything progresses really fast, it’s still coherent. This is mainly because the whole song is written around one theme that keeps coming back as time progresses. However, there are other songs in which there’s less coherence, and in those cases the fast changes in the music can lead to a bit of a restless feeling. The dissonance of the music is another aspect that deserves getting mentioned. There’s a lot of ways in which the band creates dissonance, not only between the two guitars, but also between the bass guitar and the guitars and within the vocals. At times, this dissonance, together with the technical aspect of the music, remind of the dutch black metal band Dodecahedron.

The bass guitar has a more important role than in a lot of other bands in the genre. For example, the second song of the record, Graze, starts with a groovy bass/drum solo, setting the mood before a deep voice, accompanied by two dissonant guitars, join in to make it a full death metal song.

In the next song, Engorge, the band shows their ability to play more quiet and atmospheric music. There’s two guitars playing riffs that seem to communicate with one another and together with an ethereal voice, it makes for an unsettling ambient interlude, before the full band comes back in all its energy. This ambient aspect gets taken even further in the next song: Amass. This one is completely atmospheric, joining floaty synths and a guitar to give the listener an unsettling feeling throughout the whole song.

Another song that’s out of the ordinary is Benumb, a quite silent song that’s really true to its name. In contrast to the rest of the album, the song is so silent, that you really have to listen carefully to hear what’s happening, as if your ears have gone numb. It’s a harbinger of the death that’s to follow, being so silent that it almost seems as if the album is over, only for the listener to be surprised by the next two songs. These seem to be more dissonant than the rest of the album, which is mainly because of two things: the contrast between relaxed and heavy parts in the music and the vocals. Throughout the two last songs of the record, there’s a few really calm parts, in which there’s close to no dissonance in the melodies played by the guitar. When, after such a calm part, the music suddenly blasts back to its original feel, this aggressive and dissonant music seems even more aggressive and dissonant than it already was. Apart from this aspect, there’s another large contrast in the music, which is the one between the harmony of the calm parts and the dissonance of the vocals. The vocals already sing a really ominous and sinister melody, but apart from the main vocals, there’s voices in the background which almost create a feeling of paranoia.

In conclusion, Barús’ Drowned is a good progressive death metal album in which the band shows their skill in composition, in creating dissonance, and even in creating unsettling ambient music. The progressive aspect plays a large role throughout the record, for the music changes tempo, rhythm and groove really often. On the one hand, this shows the band’s composition skills, but on the other hand, the changes can be a bit tiring at times. The fact that they alternate heavy, dissonant death metal with atmospheric interludes really creates an interesting experience, listening to the album. In short, it’s a great album with an awesome structure that really deserves a listen!