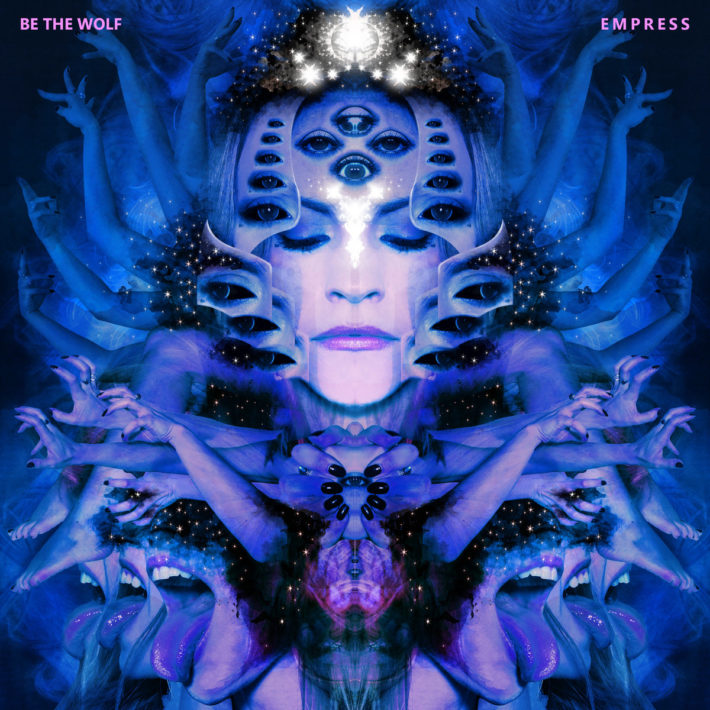 Empress, the new album from Italian hard rock trio Be The Wolf, exists in chambered bliss. The audience for traditional hard rock is vague and understated. Younger listeners with more cultural presence have drifted towards genres of weirdness and experimentation, ambitious albums threaded together by undiscovered soundscapes and expressive droning, or increasingly technical forays into virtuosity and complex arrangement. There are even whispers that “rock is dead,” and doomsayers proclaiming the exhaustion of the genre.

Of course, we know this isn’t true, but as metal has spread out to cover more diverse and specific niche demographics, and Hip-Hop, R&B, and Electronica have sunk their teeth into a controlling mainstream influence, Rock & Roll seems to be in an ambiguous state of transition, and it is unclear where it will go next. The wonder of Empress is how it bowls over the mystery and uncertainty of a wayward style. Be The Wolf thunders through rock beats and riffs as if the genre still dominated the airwaves. There’s a lot of 80s metal and hard rock in the DNA of the music, but it isn’t too particular in its influence, and to the band’s credit, they don’t sound like they’re paying homage to anyone. That’s in large part due to the vocals, which channel a more modern rock style. How effective this style is can be hard to declare, but it does prevent an excess of tributary sensibility.

Only briefly does the band seem to make a clear attempt to “fit in” to recent heavy music trends, notably with the use of synth on the second track, “Action.” It’s a strange passage of foreign sound on an album otherwise loaded with almost exclusively rock instrumentation. It’s a good song, but like the others on Empress, that’s because of the clever interplay of the melody and harmony, pleasing chord changes, and passionate energy…not a token electronic sound.

In context of a rock record, it’s a modest success. It is hard and heavy, fast and furious, beefy and beautiful, and it’s performed well. Every instrument hits with tightness and force. It’s produced expertly and features a clear, precise balance and a powerful, powerful snare sound. The guitar tone is thick and saucy. It surpasses a lot of hard rock music harmonically–chord changes are frequent and dramatic. The melodies in the vocal line ride over them well but tend to follow similar shapes from song to song. Each track has distinguishing features that separate them from the others but sometimes it isn’t enough. Where it’s overtly lacking is in the brazenness that comes from high mastery of an instrument. The great rock and metal icons throbbed with a swagger that came from knowing their own virtuosity and using it. Empress has several guitar solos but only one of them is markedly great, on “Trigger Discipline.” The parts work together as a cohesive unit, but rare is the moment that leaves the listener in shocked bewilderment.

The album is refreshingly unapologetic, and it’s a proud celebration of heavy music, but it’s missing some the arrogance and edge that makes the genre gloriously antagonistic. The last song on the record, “Jungle Julia II,” is the best one; it’s definitively the most original and the most musically diverse–it utilizes a panorama of sounds that elevate it past being just another hard rock banger. It fully embraces stylistic venture where the previous tracks only dipped their toes in it. It demonstrates that a confident exhibition of a ballsy rock attitude is adequate but stretching into creative extremes can produce a result that is truly awesome.

Hard Rock as a genre may lack clarity, but Empress does not. It’s a fun listen and has a lot to offer fans of heavy music. And although it can seem bland and dated among the flood of weird, curious, and experimental albums being released now, it has a confidence and solidity that many of them don’t–confidence that comes from a love and familiarity with a tried-and-true style that may prove to have quite a bit of life left.