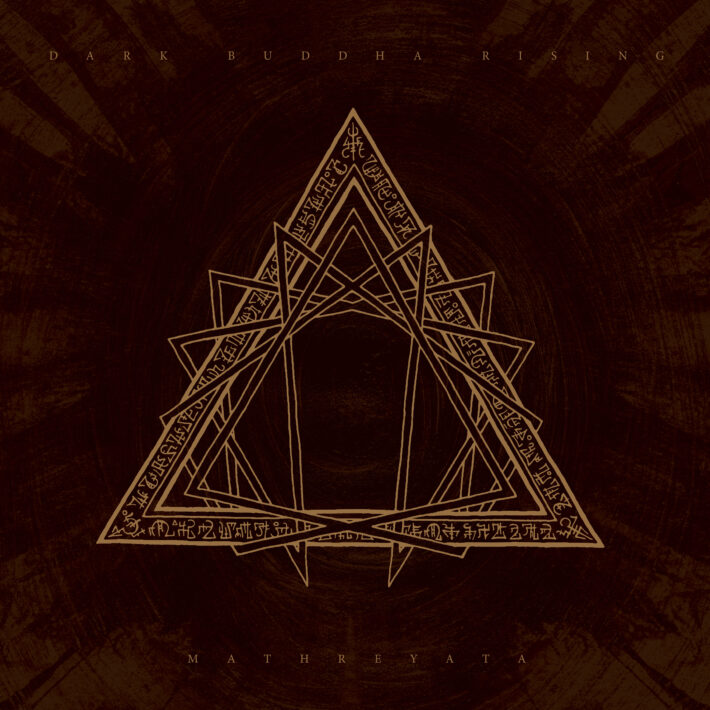 Drone metal can get tricky to play and tricky to listen to. There is a very fine line between “using subtle changes in tone and background effects to change the general feeling of a sustained note without changing the sustained note itself” and “literally Kenny G playing a single note on the saxophone for 45 minutes.” However, when done right, drone can be some of the most hypnotizing music that you will ever listen to. Dark Buddha Rising hope to capture the mesmeric allure of the genre at its best while drawing in some doom and psychedelic influences as well with their seventh full-length release, Mathreyata.

The core of Mathreyata sounds like death/doom metal stretched to the breaking point. Every note lingers, and every note feels like a suffocating weight. A rare change in key feels like a comet crashing into the earth. Just long, repeated notes would be boring even for drone metal, and Dark Buddha Rising seem to realize this. Outside the core, wind blows, vocals harmonize, and small moments flitter along the periphery of that comet, providing something more for the listener to stay attached to. These moments still proceed at their own pace. Even the most forward-looking aspects of this record demand their full lifespan and they do not relinquish control until they get them. The slower guitar notes, on the other hand, feel less like demands and more like atomic bombs.

The production on Mathreyata is excellent. The guitar tone could have absolutely ruined this record, but instead it just adds to the inevitable dread that this mushroom-cloud of an album pushes towards you. This is especially prevalent on the opening song “Sunyaga,” where Dark Buddha Rising most prominently features the guitars. This opening track could have used a little more shape to it, but otherwise the production and the songwriting combine to do an excellent job.

This excellence doesn’t last unblemished. Track two (“Nagathma”) wastes the first half of its run time setting up an atmosphere that doesn’t truly differ from the atmosphere set up in “Sunyaga.” Additionally, “Nagathma” replaces the excellent guitar backbone of the first track with more of a drum/bass focus (at least for a while) that only serves to reveal this music’s shortcomings. Without those heavy, buzzing guitars remaining front and center, everything else is forced to provide something to keep the music moving on its own terms. This fails to happen far too often. The song recovers by its back end, but wastes an awful lot of time in the process. This reveals a larger problem with drone metal: when you miss, your failure lingers in the air for a long, long time.

The third track, “Uni,” opens with an interesting atmospheric passage that does well enough if taken in isolation, but also serves to highlight the failures of the second track in the greater context of the album. This track builds on itself nicely from the start, and what does not contribute to the track’s gradual growth still keeps my interest on its own. In short, this is everything that needed to happen in the first two songs. At least they got to it eventually.

The big, 15 minute finale wraps everything up. On Mahathgata III, faults and strengths alike are unapologetically celebrated. There is an early atmospheric section that goes nowhere and yet keeps the trance-like feeling that drone metal thrives on, there is a focus on drums and bass that manages to be satisfying this time, there is an unrelenting heaviness that sounds like it borrows from some of the best funeral doom bands. This song isn’t perfect, but it accomplishes everything it sets out to accomplish, from the atmosphere, to the pace, to every shift in sound from passage to passage. The extended time lets Dark Buddha Rising gradually lift their music to the heights previously not seen in this record, and everything that didn’t quite hit the mark in the previous tracks finds a satisfying conclusion in the finale.

When writing this review, I talked myself into giving this a higher score than I initially planned on giving it. Ultimately, I did not enjoy Mathreyeta as much as the music maybe deserved to be enjoyed. I found myself fixating on its weaknesses after listening, but that doesn’t change all of the good that this album delivers. Dark Buddha Rising have made an expanding, relentless album, and people inclined towards drone music would be wise to check it out.