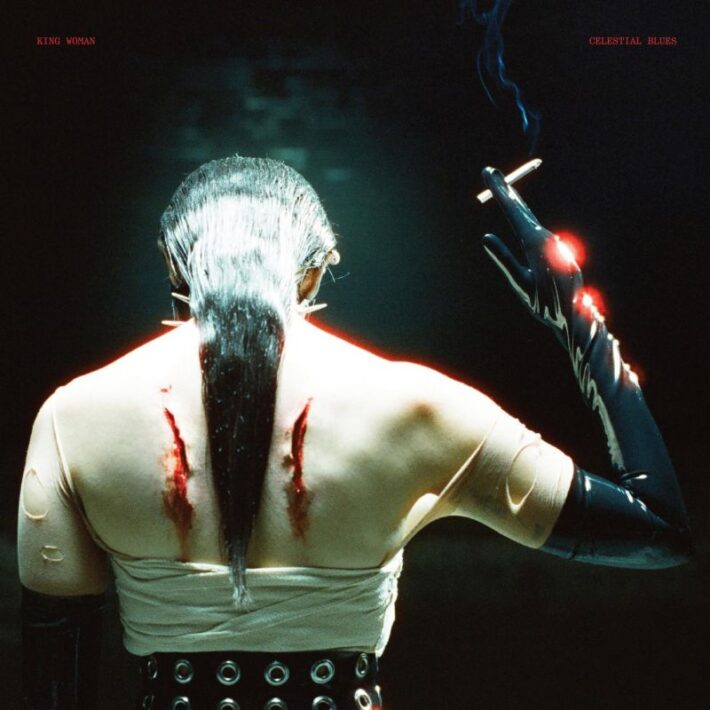 King Woman appeared on the scene back in 2015 with the “Doubt” EP released on the shoegaze/experimental label The Flenser. It instantly garnered attention, attracting both positive and negative opinions. The sound was the highest tier of heavy. Infinitely dense, drone-informed, going for texture over riffs. Slow, dejected melodies nicely complimented Kristina Esfandiari’s equally dejected vocals. Her deep voice, her fully entranced performance, somewhere between the tiredness with life and a searing need to express it. These were the pillars that King Woman’s sound would rest on, and much to the joy of fans, with the benefit of hindsight, “Doubt” seemed like an amateurish take on a great idea which flourished with further records.

King Woman always attracted a veritable mix of both positive and negative reactions, some calling it brilliant, others calling it boring. The reason for this, I propose, were a sort of confused expectations among the audience. King Woman quickly got labelled as a new meld of shoegaze and doom metal (this was, back in the days of “Doubt”, still a sort of novel sound). This drew a variegated crowd, and some of those who came from the metal side of things misunderstood King Woman as another band in the then popular trend of female-fronted doom metal bands such as Subrosa, Windhand or Witch Mountain. That crowd was disappointed, as the assumed similarities proved to be superficial. King Woman was, for all intents and purposes, not a classical doom metal band. Some assumed, then, that this was simply bad doom metal. Others, including myself, disagreed, as King Woman was more than just doom metal. It is a band that expertly strides shoegaze and doom metal at the edge where their potentialities overlap, rarely stumbling.

King Woman took a while to release their full-length, much to the impatience of the believers. “Created in The Image of Suffering” dropped a whole two years later on Relapse Records, which also probably contributed to the confusion, as you’d sooner expect a sludge/doom record from Relapse than something that tentatively strode that classification. Reactions were similar, but at this point I’d like to stop explaining the history of King Woman’s reception and leave behind the negative and middling reactions.

Let’s focus on the good stuff, and “Created in The Image of Suffering” was indeed good. Great even. The sound of King Woman’s debut full-length bore the same motivations of its preceding EP, yet the execution was a huge leap. It was a fully developed sound that used a whole palette of different techniques to express the breath-taking explosion of emotion. There was still fuzzy droning, but there were also proper riffs this time around. Some cite these as being simplistic and boring, but in my opinion they were carefully chosen to achieve a certain effect at certain moments. It was a full concord between the instrumentals and Kristina’s voice. If they complimented each other well before, they now did it perfectly, creating a sound that transcended each, giving listeners an overwhelming experience that was miserable, yet hopeful, i.e. fully cathartic.

Again, before we got another record out of King Woman we had to endure a long wait. A double one this time. Four years later, we got “Celestial Blues”. History repeats itself. The wait paid off once again, as the band once again achieved a leap in their sound towards the better. If “Created in The Image of Suffering” showcased a mature band, “Celestial Blues” is somehow…even more mature?

In any case, “Celestial Blues” is more. King Woman once again successfully tries out new things to add to their arsenal. The record starts with the title track which at first glance is just a quintessential King Woman track. The tone is thick and loud. Kristina’s harrowing vocal melodies and chants are still there. Loud parts are interchanged with quiet ones. The tingling feeling the band used to invoke is back. Fans rejoice. Yet upon closer look the title track here is more intricately constructed than probably anything on the previous record. It’s still not technical by any means, focusing on emotional impact rather than technical brilliance. The second song we get is Morning Star. If the previous track convinced you King Woman improved, you aint seen nothing yet. Starting with a step by step interchange of mighty guitars and drums on one side and careful and quiet dirges, the song explodes at the halfway part. Everything turns to 11, and Kristina starts chanting as if fallen into a trance, murmuring  visions from beyond. Hypnotic.

We then get Boghz, the track where the full spectrum of King Woman’s innovation is revealed. If the band was previously associated with doom metal, this is full on sludge, aggression and all. The riffs get menacing and Kristina forces a raspy shout. A band that started slow, tired and dejected is now really pissed off and very convincing at it. Next up is Golgotha, which I’d compare to Morning Star in just how well it’s constructed. There’s little full-on riffage, firmly sitting at the mid-tempo with several layers of Kristina’s voice chanting us through this dark psychedelic trip. Up next is Coil, the shortest track on the record, and nearly a punk track. The band plays faster than they ever have, Kristina screams harder than she ever has.

The second half of the album is still solid, but in my opinion a bit weaker than the first. Entwined is the second longest track on the record. There isn’t much I’d point out specifically, it’s just a solid King Woman track. Psychic Wound plays it straight with strong guitar and vocal melodies, driven rhythm and layered screams. Ruse is superficially similar, but is actually a much more sorrowful track, Kristina both wistfully lamenting and screaming in pain. The record aptly closes with Paradise Lost, a fully calm track with no loud instruments.

Let’s end this review with a discussion on the album cover. It’s superb. I love it. It perfectly encapsulates what I think King Woman is about, or at least what it is for me. A figure (I presume Kristina herself) stands in the dark with its back towards us. A white shirt is torn to reveal two deep bloody gashes along the sides of the spine. Perhaps an allusion to an angel losing its wings (the song Morning Star is, after all, about Lucifer)? In any case, the figure does not seem to be much bothered about its wounds, almost triumphantly holding a lit cigarette in a black latex gloved hand. The framing and the pose illustrates toughness and resilience, especially the brightly lit back, wide and strong, still unbent. Yet the figure has its head slightly bowed, perhaps with lingering regret after the struggles which left it scarred, but unbroken.

The figure on the album cover is a survivor. King Woman’s music too, seems about survival, persistence in the wake of trauma and regret. Kristina’s singing exudes suffering and remorse, yet there isn’t a single moment where she claims defeat. She is not afraid to bare her bruised soul, but almost as if to confirm that it’s still here and at moments explosively affirm that it hasn’t capitulated an inch to her adversaries. Yet none of this would be possible without the overwhelmingly powerful and expertly wielded tones of the rest of the band, each knowing exactly where to place their melodies, rhythms and texture to make the most of the song. Going through a King Woman album (played as loud as possible, as it should be) is an emotionally demanding experience, yet absolutely cathartic, ritually igniting the darkness within, suffering through the flames, in the end shedding the ashes from the skin and eyes, seeing the light once more.