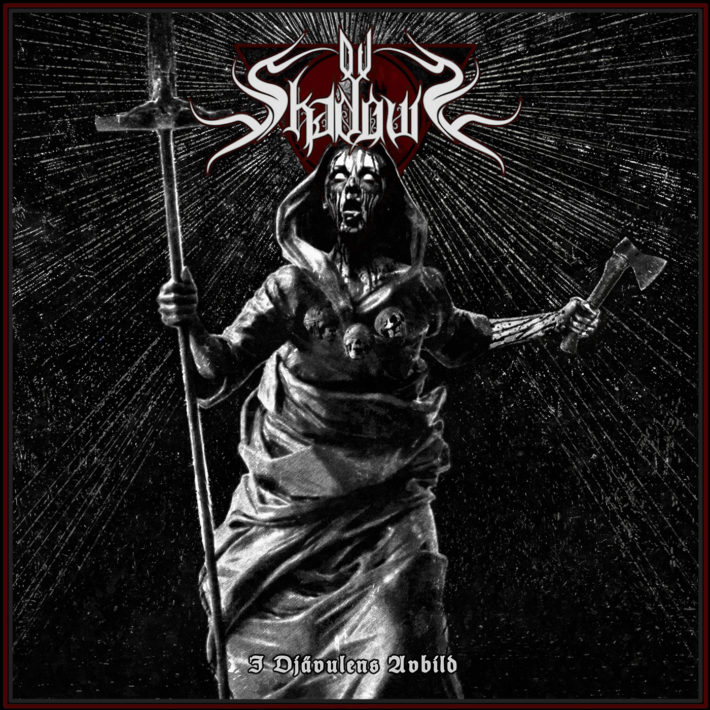 Too many bands reach forward, not enough reach inward. A lot of acclaimed music is plowing through the present and the past, trying to find the next new thing. New sounds, new fusions, new genres. It’s the easiest way to stick out. However, music can be iterative. Just because someone made an album twenty years ago doesn’t mean that you can’t do it better. Enter Swedish metallers Ov Shadows. Their attack on their sophomore album I Djävulens Avbild offers something old, rather than something new (plenty of the music could also be considered something borrowed, but sadly there isn’t really a strong blues influence here). Ov Shadows are fighting thirty years of preconceptions here. Are they up to the task?

Ov Shadows play black metal. There are no frills, no subversions, no nothing aside from black metal here. Some bands taint their sound with a jazz/electronic/ambient/polka influence or whatever, but here you will find as pure and simple distillation of the genre as the band’s name implies. This proves to be their best and worst trait.

A lot can go wrong with this genre, but Ov Shadows nail their intended sound. Energy pulses through this album from beginning to end. Even in simpler moments, when there aren’t really “riffs” and “melodies” so much as “sustained notes,” the band surges forward, never letting their sound grow stagnant. This could have easily backfired, especially for a band as young as Ov Shadows is, but they pull it off. This group seems to possess an ability to make any note enjoyable, the result being that even when I wanted more from a particular passage or song, I left the listening experience with a good impression of what I did get rather than a desire for what was absent.

Ov Shadows wrote their tracks in a way that sounds like they are drawing within the lines. They’re excellent at what they draw, but it’s still someone else’s form at the end of the day. This is less of a strength or weakness of the album and more of a warning about it: do not approach Ov Shadows expecting them to break the mold because you can probably already guess exactly what they are playing. They perform with extreme competence at worst and snarling darkness at best, so this doesn’t usually end up hurting them.

When their paint by numbers approach does hurt their sound, it’s due to a sense of obligation rather than artistic pride. Why is there a sense of snarling darkness throughout I Djävulens Avbild? Because that’s what black metal is and there is no reason to change it. This album does not have its own identity and never even attempts to make a statement on its own. It is a black metal album, standing on the shoulders of giants and nothing more. There isn’t necessarily anything wrong with that, but Ov Shadows are talented enough to speak their own words rather than repeat the lines that Emperor have been reciting for decades.

The final double-edged sword of this release is the pacing. There is no real variety in the music. I Djävulens Avbild is a short album, so this isn’t too much of a crime. But that sense of pushing forward and driving energy that permeates Ov Shadows‘ music ends up unraveling itself. The internet tells me that you are currently spinning through space on a rock at a speed of about 460 meters per second, but that is so commonplace that it feels like you’re standing still. With no reference point, all that energy and direction evens itself out into the standard rather than something impressive.
Sometimes you don’t need to reinvent the wheel, you just need to make a really nice, high quality, smoothed out wheel, with white hubcaps or something. This is what Ov Shadows have accomplished here. For some people this will end up in the forgotten scrap heap of black metal this year, but those that manage to come across it will find an enjoyable, solid release.