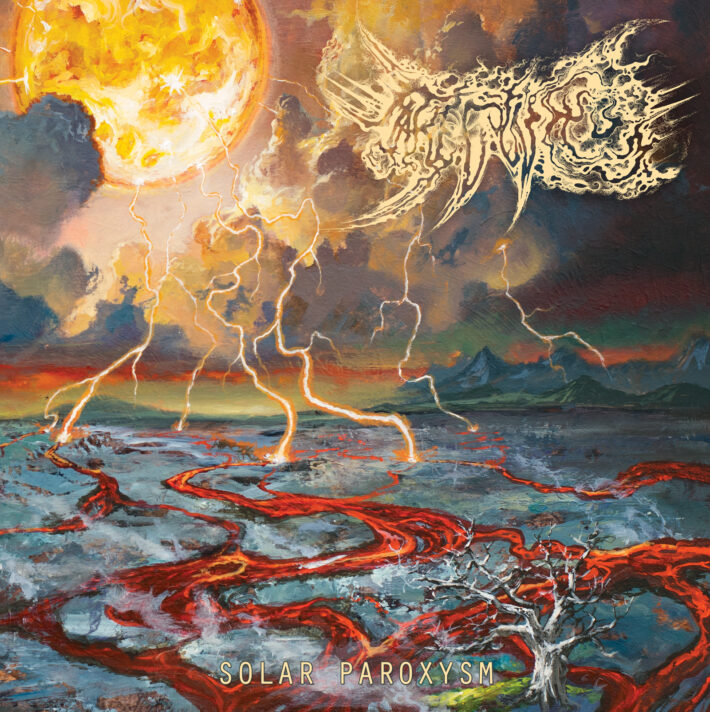 Solar Paroxysm is Mare Cognitum’s first new album in five years. Sort of. And yet it may still be too early. This album comes right on the heels of Wanderers: Astrology Of The Nine, a gigantic, enthralling split between Mare Cognitum and fellow one-man atmospheric black metal act Spectral Lore. Both artists contributed a full album’s worth of material, and soI questioned if the gas tank had refueled enough for Mare Cognitum to create two solid albums in two years.

On first listen, Solar Paroxysm sounds extremely similar to Mare Cognitum’s previous LP-proper Luminiferous Aether. The two albums have a similar number of tracks, with similar lengths, themes, riffs, and feels. Even after multiple listens, the albums mirror each other enough that it’s worth comparing the two directly. However, it becomes clear after going back and forth between the two that Mare Cognitum changed during his time with Spectral Lore. The results make for a much more satisfying listen.

On the Wanderers split, Spectral Lore made the more atmospheric music. If a track had a hard edge or less ethereal riffing in it, chances are that Mare Cognitum bore responsibility. The two acts have made some similar music over the years, and collaborating for the second time looks like it forced their sound to drift apart ever so slightly so that Wanderers didn’t become a giant blob. As a result, everything on Solar Paroxysm has a harsher feel than its 2016 predecessor.

There are no bad tracks on Solar Paroxysm. One the one hand, the album only had five chances for one. One the other, that’s almost an hour of absolutely solid sounds at a minimum. And this album soars so much higher than that minimum. Some of the riffs, such as the closing riff on “Ataraxia Tunnels” and “Frozen Star Divinization,” are more memorable than atmospheric music feels like it should be. The music always feels focused and driven, which is remarkable for exclusively over eleven minute long songs. And although this definitely still deserves the tag of atmospheric metal, nothing ever gets lost in the dark.

All that being said, if you didn’t enjoy Luminiferous Aether or Wanderers, you will not enjoy Solar Paroxysm. Although I believe this improves on both of those releases in terms of focus and consistency, the difference isn’t so great that Mare Cognitum will win over lost fans. The only musical complaint that I have is that the beginning of “Terra Requiem” lasts longer than it should, but I still enjoy listening to it. Yet, there are some other problems I imagine others will have. An hour of music is a lot, and this record didn’t need to be this length. This is also still Mare Cognitum’s sound. If you want music that is groundbreaking and unique, you probably won’t even have to listen to this record twice. The tracks also end up sounding quite similar, so someone less enthralled with them than I am could easily end up tiring out on this sound by the middle of the record with no escape.

With Solar Paroxysm, Mare Cognitum raises the bar. Who else is making atmospheric black metal this fun to listen to? Sure, The Ruins of Beverast released another excellent album earlier this year, but that band has moved off into a more doom-y sound, and doesn’t really feel similar at all. Blut Aus Nord seems to have wandered away from this sound as well. Spectral Lore…well, we’ll get to him soon. Far from running out of ideas, Mare Cognitum has iterated and incrementally improved his way to the top of what might be the most crowded genre being released right now. When this album was announced, I had some concerns. I still have similar concerns, but in a new context: how can Mare Cognitum even follow this up?