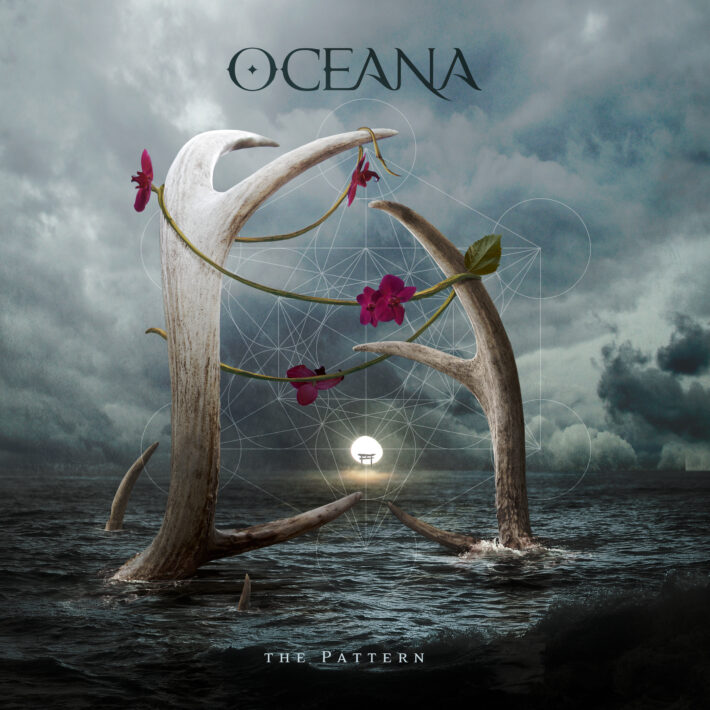 With the last few albums I’ve reviewed having been somewhat…lacking in what I was looking for, I was hoping that Oceana would break that streak for me.  After all, I find it easier to talk about something I like as opposed to the other way around.  After spending some time with The Pattern over the last couple weeks, Oceana are a definite step above the victims of my previous reviews, but also underwhelming.

Oceana hail from Italy, and despite being together for more than twenty years, The Pattern is their debut album.

The first thing I notice when I play this album is the superb production quality.  Every instrument is placed perfectly in the mix, no voice or melody over-powering one another.  Listening to the guitar and bass play together in the beginning of  “Fall to Silence” is so pleasing to listen to because of Dan Swanö’s talent behind the mix console.  Even the drums are crisp and clear, the double bass drums never getting lost in an audio landslide or transitioning into an irritating typewriter.  All in all, nothing about this album feels “artificial,” a term that I would equate to something like the metalcore scene.

The Pattern is an incredibly catchy record.  More than once, I found myself humming a the chorus from “Hiding Lies” or “Carousel.”  It might have been more out of annoyance than anything, but I can’t deny their ability to write earworms that wriggle into my head from time to time.

Despite the pristine audio quality and the overall catchiness of the songs, it wasn’t enough to win me over.  I categorized this album as “progressive metal” album, and even the promo kit labeled is as “progressive/melodic death metal.”  It fits the “progressive” description, but from the generalized sound of prog, rather than any actual progressive tendencies.  It features the stereotypical “clean” guitar tone found on so many prog records; the interplay between bass and guitar lines, while impressive, has been done before.  It even has the usual prog staple of a song longer than ten minutes (granted, there is only one.  And there are a handful of shorter songs mixed in).

After my first listen, I was ready to write The Pattern off as generic.  However, after subsequent listens, I doubted that initial assessment.  Things like its production quality and the undeniably well-executed performances from each of the instrumentalists made me want to dive into it again.  However, when I had the album playing while I was at work, it quickly faded into the background of everything else.  I wasn’t curious enough to look at what song was playing, nor did make me stop what I was doing and pay attention to what was going on.  Even their cover of “The Unforgiven” just made me want to put on the original despite its faithful rendition.

If I had to sum up my opinion as a metaphor, think of a painting.  When you look at it, you might recognize the talent of the artist, or you just simply like the picture itself.  But as soon as you move on, it’s forgotten.  This album lacks the musical equivalent of shine, the element that makes it pop.  Hopefully album #2 will have it.