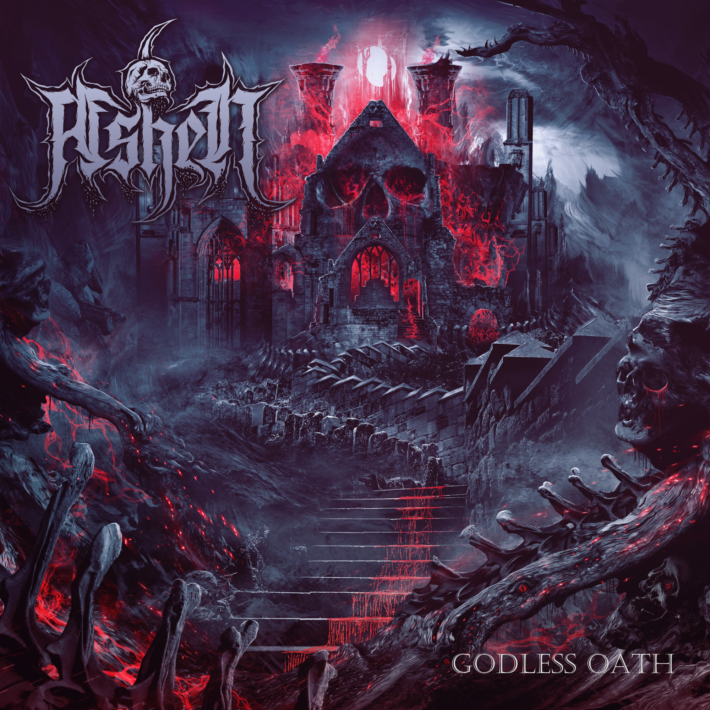 Ashen are a new death metal collective from Australia, and Godless Oath, their debut EP, comes to us from Bitter Loss Records. This band plays a basic Floridian OSDM style. Given that they don’t venture into any particular death metal subgenre, and given the general saturation of OSDM in the modern day, Ashen seem to be hoping to lean on solid, effective writing to prop them up.

As with most good death metal releases, the riffs pop out immediately. The songs themselves remain fairly flighty, but the big riffs slow down and clothesline the remaining instruments. This results in some good, heavy moments. No one will mistake these riffs for technical bedazzlement, and that clarity gives this EP some of its strength. Slow, churning riffs let Ashen linger in heavy sounds, and Godless Oath sinks to the bottom of the pile.

The production on Godless Oath sounds excellent. It’s modern, but not bricked. Everything feels clear, but this doesn’t feel overdone. The production job gets in the way just enough to make sure that all instruments can be heard with clarity, and then it retreats in the background to allow Ashen to bludgeon the listener without distraction. And bludgeon Ashen does. Even for death metal, Godless Oath sounds impressively heavy. Heaviness can be a bit of an ephemeral concept, but whatever your definition is on any given day, Ashen’s got it and they use it to its fullest advantage.

On a fundamental level, Ashen have everything they need. All members play their instruments well, the riffs keep the music going, and all the tracks are dynamic enough to leave me wanting more. Above all, the songwriting doesn’t sound stale or forced. Godless Oath has a natural, timeless feel, as if these songs couldn’t have existed in another form. Despite the following paragraphs, I enjoyed Ashen quite a bit, and that wouldn’t have been the case were it not for Ashen’s consistent competence. Every note flows from the previous note, and the tracks all slot perfectly into your expectations of an OSDM release.

In fact, they slot a little too well into the chosen style. The biggest problem for metal bands is standing out, and Ashen don’t really do enough on that front. Godless Oath shouldn’t have all of the expectations of the world laid upon it, with it being a debut EP and all. I’ll wait for Ashen’s full-length debut before feeling too upset if Ashen don’t light the world on fire. However, I do wish that Ashen gave us more.

Godless Oath sounds less like the new birth of an exciting band with potential, and more like generic death metal release number eight of this week. And while the band performs everything competently, they don’t excel anywhere. The riffs are the strongest part of the record, but they don’t provide enough power for Ashen to break through the rotten ceiling and into the skies. If Godless Oath simply represents a band getting their feet wet before fully submerging, then it’s a promising start. If instead this is a shorter version of what the band will do on their debut, then it’s just more of the same in a very crowded genre.

With Godless Oath, Ashen have formed a solid foundation for their sound. Now they just need to build something worthy on top of it. All of the pieces are here for success, and although Godless Oath felt a little like a standard template at times, Ashen still demonstrated intriguing promise on their debut EP. Regardless of the future, I enjoyed Godless Oath well enough. If you want good, riff-centered death metal and don’t feel like travelling outside of your comfort zone, check out this EP.