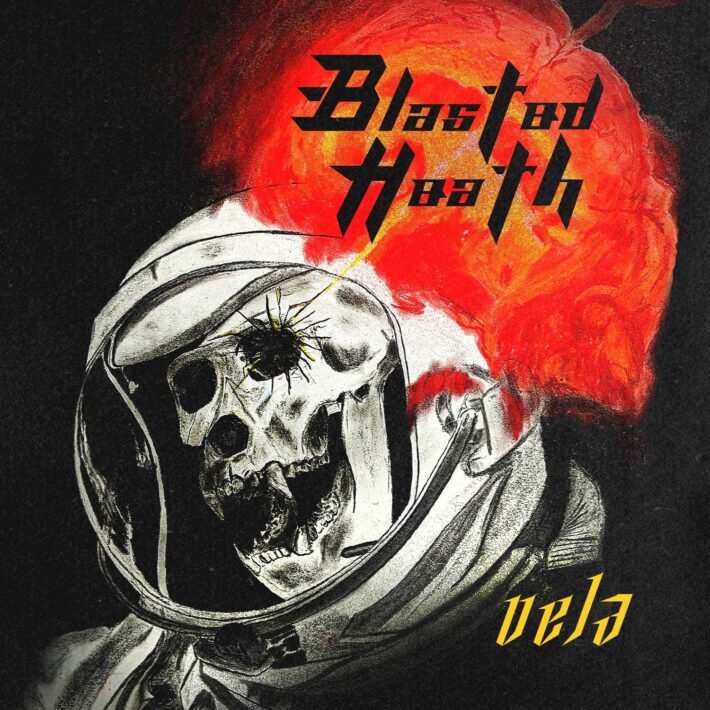 Blasted Heath are an Indianapolis-based blackened thrash group looking to conquer the galaxy through unholy riffs and a dirty sound. Vela is their first record. This group carefully treads a line: they’re trying to sound raw and powerful while also having some more detailed and intricate songwriting choices.

The vocals on Vela are nothing if not passionate. Despite excessive reverb threatening to sink any possibility of expression here, the singer nevertheless gives shifting moments of passion and sinister screaming. The singer even manages to make the reverb work in his favor, creating pseudo-harmonies in some of the clearer moments. Most of the vocal lines are typical blackened growls, but they move to harmonic territory at times without losing their edge. These vocals are mainly what drives Vela.

The performance given by the guitarist leaves me wondering what’s missing. The solos are competent and flashy, but they don’t grab me. The riffs are played well. I think the songwriting here gets in the way of a good enough performance, and more on that later, but I feel that something is missing from this playing. Setting that aside, these performances sound solid and and are an important part of a young and promising group.

The bass and drums are twin victims of a questionable production job. The drums are exciting when given the spotlight, but too often they are veiled by guitar buzz and vocal echoing. While I realize that not everything can be louder than everything else, some extra clarity would have helped here.

Let’s go more in depth with the production. They’re going for the early black metal hazy sound, similar to Aura Noir or Bathory. Unfortunately Blasted Heath don’t have enough snarl to pull this off. Electronic effects or guitar wails, especially those in tracks like “Neutron Star” and “Big Chill”, feel out of place and hurt the effect. The spoken word sections do the same. The production job, rather than feeling like an integrated part of the songwriting process like in bands such as Black Cilice or just part of the game like in bands such as Venom, feels awkward and out of place. It is like a painting hung crooked on the wall rather than a well thought-out structural support.

For the most part, Blasted Heath’s songwriting is focused on vocal lines, death metal-esque riffs, and wailing guitar high notes. Their approach just doesn’t quite work. Songs feel like lumps of passages connected with suspect tissue. Some of the guitar moments feel added on for the sake of having something to do. Some of the other moments on the record, including the long spoken word sections of the trainwreck track “The Wind In Vela” and the guitar outro of “Europa”, end up feeling more like a waste of time than anything meaningful.

It’s a shame because Blasted Heath is clearly trying something interesting here. It just doesn’t work. The mixture of blackened thrash energy with creepy, sometimes subdued atmosphere and a first wave black metal production job sounds like a solid plan, and the record wasn’t that far away from being excellent. But too many aspects of this record were awkwardly stuffed together and don’t quite fit in with one another that the effort doesn’t pay out. More stripped-down effects would have helped the production, a clearer focus on drums would have made their absence more significant, and the vocal reverb would have been better if it wasn’t just slapped on everything.

Vela is not for me. I can appreciate what Blasted Heath was trying to do, but this record is not cohesive enough to work. There are enough bright spots to prevent this from being a flop. Stil, I won’t be returning to this too often. If you’re looking for raw blackened/thrash with twists, Blasted Heath might be of interest.