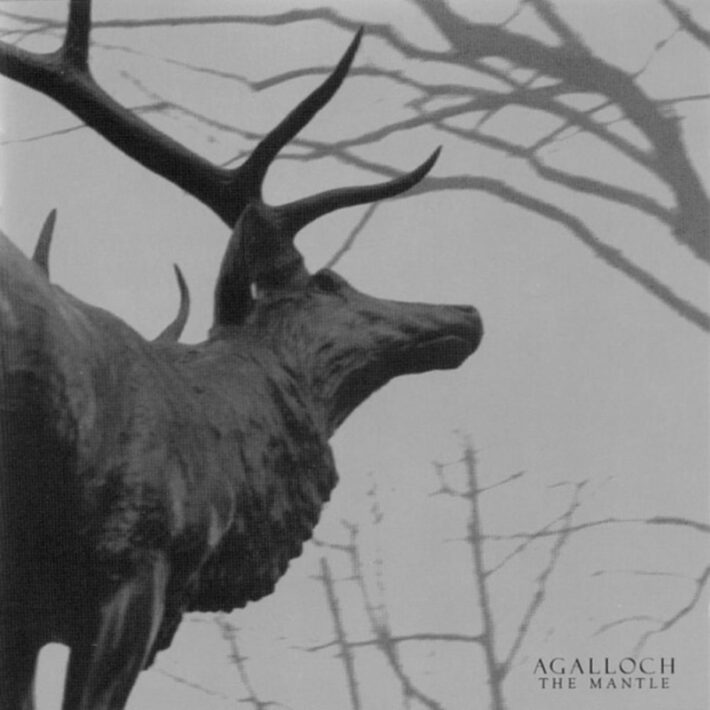 Since long before I started writing reviews, I’ve thought about putting together a tribute to some of my favorite albums. I would sit and wonder what I’d say, how my words could possibly convey the magnificence of these pieces of art and the profound effect they’ve had on me as a person. After reading some of the anniversary pieces my co-writers have put together, I wanted to write one of my own. As luck would have it, the 20th anniversary of Agalloch’s opus The Mantle was approaching, so I decided I would finally put pen to paper.

Coming on the heels of their debut album Pale Folklore, Agalloch were looking to expand their sound. Pale Folklore derived heavily from their core inspirations: Ulver’s debut Bergtatt, Katatonia’s Brave Murder Day, and English goth-rock band Fields of the Nephilim. Following their debut release, the band reportedly stopped listening to metal, instead immersing themselves in neofolk, electronic, post-rock, modern classical/minimalist composers, and singer-songwriters. These outside influences were first adapted on their 2001 EP Of Stone, Wind, and Pillor, and would later be perfected on The Mantle.

The release of The Mantle sent waves across the metal world. In the years following, we saw an explosion of atmospheric black metal bands worldwide, many of whom would incorporate elements of folk from their respective regions and cultures. We also saw the development of a new black metal scene in the Pacific Northwest, with bands like Wolves in the Throne Room, Skagos, and Alda directly inspired by the efforts of Agalloch. Four years after The Mantle, Agalloch would release Ashes Against the Grain, and despite being more strictly atmo-black focused, it would be embraced just as warmly as their prior masterpiece. At that point, Agalloch were already one of the most successful American black metal acts, and by the time of their break-up in 2016 they would be considered legendary.

The first time I heard The Mantle was on a road trip. I was travelling north with my family, from Phoenix into the mountains towards Flagstaff. If you are unfamiliar with Arizona’s geography just know that Phoenix is a desert valley, whereas Flagstaff rests high in a mountain range, square in a massive forest of ponderosa pines. Hearing the acoustic strumming of “A Celebration for the Death of Man…”, I was instantly transported into the heart of the sprawling forest outside my window. Every time I listen to The Mantle, I find myself back in that forest. I’m sitting by a campfire, or I’m cozied up in a cabin by the fireplace, hearing the wind whistle through the trees, and swaying with the strum of every chord.

When I eventually moved to Boston, I anxiously awaited the first snows. When they finally came, I broke out my snow boots and my puffy North Face jacket, cranked up The Mantle, and walked. I meandered alone down the dimly lit streets, feeling the freshly-fallen snow crunch beneath my feet. Even though I was walking the same streets I had walked for months, I felt compelled to stop and take pictures of my surroundings. The light of the streetlamps that illuminated the untread snow blanketing the streets was too beautiful not to capture. Now, I listen to The Mantle every time it snows. I listen to The Mantle every time I travel through a forest, and every time I need to escape city life and return to those glorious ponderosa pines.

What makes a legendary album, to me, extends beyond just the music. My highest honors are reserved for those records that speak to me in a way that is deeply personal. In that sense, The Mantle is a meditation on death, faith, and of course, nature. The brilliant composition of The Mantle combines the layers, depth, and dynamics of an orchestra with the intimacy and emotion of a campfire serenade. The masterful melodies that weave between acoustic, clean, and distorted guitars reach deep into your soul, and Haughm’s whispered growls and droning cleans don’t merely sing a tune, they speak. “In the Shadow of Our Pale Companion” is more than just a perfect song. It’s an experience. If you’ve ever had the opportunity to gaze out at a vast pantheon of oak, to truly appreciate the unfathomable beauty of nature, then this album will resonate with you too. Listen to The Mantle as you immerse yourself in Mother Nature’s domain, and you will see the divinity of the world we have. After all, the closest thing we have to God here on Earth is the transcendent beauty of nature.

“The happiest man is he who learns from nature the lesson of worship.” Ralph Waldo Emerson.