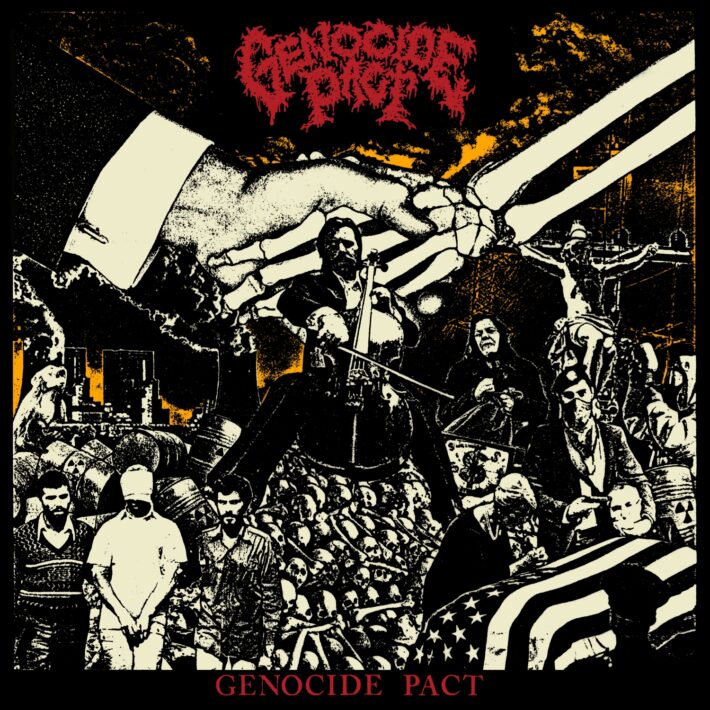 Genocide Pact play slow death metal that at times remains barely too frantic to be classified as death/doom. They alternate between chugging to create a ruckus and savouring a long wavering guitar distortion. They don’t have any gimmicks or innovations, instead this band relies on the brutality of death metal and on their own songwriting ability to turn their standard brand of death metal into something memorable. Their self-titled album follows two similar releases, including 2018’s Order Of Torment, which I thought was a fine enough release.

The riffs here aren’t bad. They don’t make up for any of this album’s flaws, and do not propel Genocide Pact to a higher level, but I had no issues nodding along to them. The rest of the songwriting follows the same patterns. Nothing about the drumming, vocals, or baseline stand out to the album’s strength or detriment, and no part really sticks out. Middle of the line, competent death metal. This goes for the performances as well. Genocide Pact felt safe and comfortable. Maybe not what some people are looking for from death metal, but the genre’s pretty old by now. Not everything can sound crazy.

The production allows Genocide Pact to stretch out and revel in their heaviness. This band takes advantage. What Genocide Pact truly excel at is instilling a sense of heaviness beyond what the songs should give. Their slower riffs sound directly ripped from Black Sabbath or their stoner doom spawn, but Genodide Pact’s lingering riffs simply sink lower. This excess heaviness ends up being their defining trait, and will be what sticks with me after the riffs vanish when I’m in between listens.

Really, whatever you thought about Order Of Torment will probably carry over to Genocide Pact. The band hasn’t evolved a whole lot, which fans of the band will probably love. No reason to change a winning formula. Genocide Pact sounds a little murkier than Order Of Torment and features a fuzzier guitar sound, but those changes don’t alter or evolve Genocide Pact’s style. The band deserves credit for consistency, and for putting out multiple quality releases in a row.

The album’s blunted edge is its biggest downside. Too much of Genocide Pact just sounds like chugging or eight-note pounding. A little more song-writing variety would have helped a lot. Genocide Pact ends before I can get tired of it, and I appreciate its short runtime. I just felt overwhelmingly indifferent about this record. I didn’t mind putting it on. I didn’t even mind listening to it back to back. It just doesn’t sound compelling or unique either. Genocide Pact is the musical equivalent of a Honda Accord: safe, dependable, and easy to forget. No one will be offended by this record, no one will hate this record. Genocide Pact is overwhelmingly fine.

None of that alters that I enjoyed Genocide Pact while I had it on. Maybe this record has no chance of being one of my favorite records of the year, or even one of the best death metal releases of the past few months. Does that matter? I had good times with this record. Not every album has to be a crazy release that pushes the boundaries of what music can be. Sometimes you just want a good chugging death metal record, and that’s what Genocide Pact have provided. I can keep complaining about what isn’t on the album, but what is on Genocide Pact gave me enough joy.