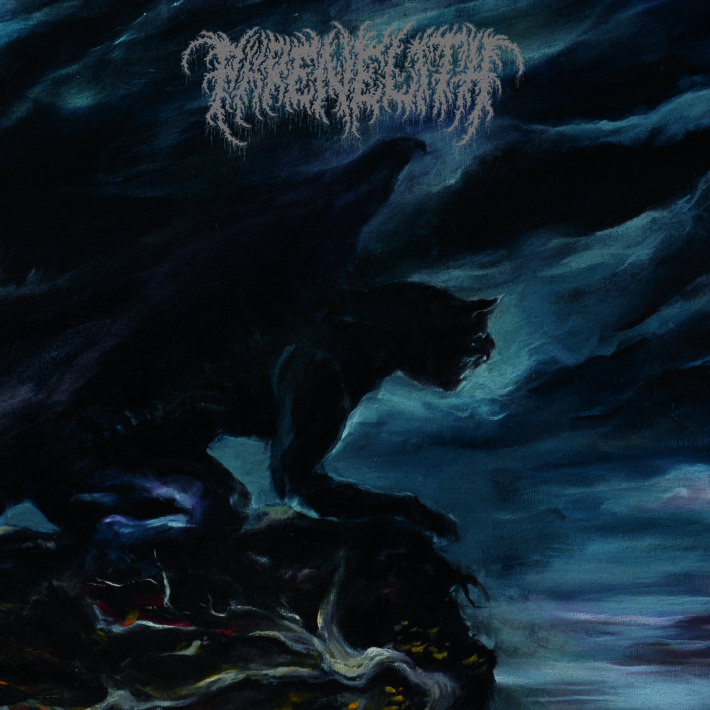 What makes music heavy? Answers vary wildly to this question, to the point that metal listeners won’t even agree on what even counts as heavy, much less on how the heavy things became what they are. Some people say that brutal death metal is the heaviest genre, with guttural bellows and pounding drums counting for everything. Some say that Gojira’s “The Heaviest Matter Of The Universe” is the heaviest song ever written, because a name is everything. Some people say Black Sabbath get heavier than anyone, because we live in a world where the future has been killed and the past screams in agony as it is not allowed to die and yet not allowed to live, instead finding itself regurgitated endlessly against a formless gray horizon. Funeral doom gets votes as well. Some bands come up time and time again, though. Phrenelith is one of them.

Phrenelith are a Denmark-based death metal band. Their debut record, 2017’s Desolate Endscape, left craters in the musical landscape, and Chimaera aims to have the same effect. They play a constantly moving brand of brutal death metal that sacrifices nothing for anything. They use mid-tempo riffs to give their sound weight, and use black-metal-esque tremolo to keep the mind occupied.

The riffs on Chimaera are excellent. Phrenelith often take simple ideas and ornament them to the point of awe without losing any of the power that death metal bands find in simple, memorable melodies. Right off the bat, “Awakening Titans” gives the listener slow, repeated lines with enough disconnect between the guitars to make full use of the different instruments even when they are playing the same line. Underneath, the drummer alternates between providing simple and effectively hard-hitting beats and providing satisfyingly berserk fills.

Chimaera feels more spacious than Desolate Endscape. Phrenelith put just enough soft moments on both records, but Chimaera uses them to greater effect. On the one hand, this makes Chimaera less heavy than it could have been. On the other hand, it gives me more ability to savor Phrenelith’s excellent songwriting, which extends to the soft touches on Chimaera as well. Production also plays a role in Phrenelith’s more open style, as Chimaera just sounds fuller. Again, this makes the record sound less heavy. Again, I can appreciate the songwriting even more as a result.

Phrenelith give the listener the complete death metal experience. There are great solos, impressive drumming, memorable vocals, a full bass sound, everything. And even though this album isn’t as heavy as its predecessor, Chimaera still significantly increases the gravitational pull of the earth. This is a band at their most effective.

With all of Chimaera’s strengths, I still feel that something important has been lost here. Desolate Endscape sounded like a statement. Chimaera less so. I kept waiting for the other shoe to drop when listening to this, but feet everywhere apparently remained covered. The production sounds brighter, the songs employ similar songwriting tricks, and whatever that unnamable thing that creates heaviness is took a step back.

That’s not to suggest that Phrenelith have given us a bad record, just that Chimaera doesn’t quite reach the same extreme that Desolate Endscape did. This band isn’t journeying to the end of the world, instead they are creating great death metal. Ultimately, Chimaera feels more like a follow-up to Desolate Endscape than its own thing. Phrenelith cast a long shadow with their debut, and they haven’t emerged from it yet.

Chimaera ends up being merely one of the year’s best death metal releases. For whatever reason, it’s not as heavy to my ears as Desolate Endscape was, and as a result isn’t as special. But that doesn’t change how good this record sounds: Phrenelith are as good at writing riffs that sink into the ground as anyone around. Any death metal fan should give Phrenelith a chance.