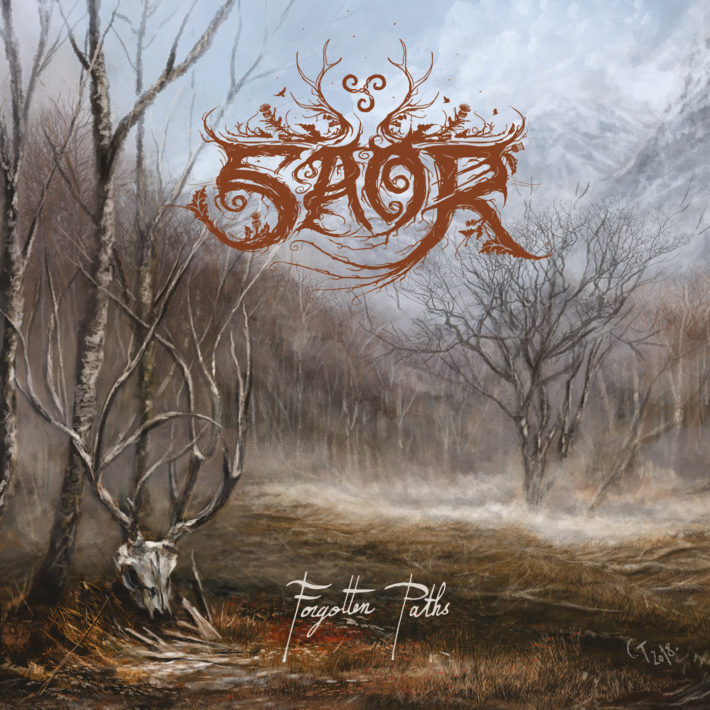 If I had to describe “Forgotten Paths“ in a word, I would probably use phrases like „streamlined“ and „stripped down“. Now, in the context of music many instantly associate these phrases with negative things. A simplification of the sound, a dumbing down if you would. However, I will attempt to explain how in this case this is a good thing and works in Saor’s favour.

Let’s for a moment compare “Forgotten Paths“ with the album that came before, 2016’s “Guardians“. It can rightfully be called a dense album. The production was very thick with a strong low-end presence, all sounds being meshed up on top of one another. To add to that, the songwriting went all-out, with many layers of diverse instruments playing at the same time. Don’t get me wrong, it actually worked, and Saor managed to create a unique and strong sound on that record. It wasn’t a jumbled mess, the murky yet somehow soft production turned everything into a coherent stream of melody and atmosphere. Though it shouldn’t be said everything worked perfectly. It was at moments a bit overwhelming and coupled with the album’s long runtime (five songs of 10+ minutes) the songs sometimes blended into each other and I couldn’t always keep the patience to listen to the whole thing through.

How does “Forgotten Paths“ compare? For starters, it is 15 minutes shorter than “Guardians“, opting instead for 4 songs of varying length (in my humble opinion a perfect format for atmospheric black metal, see albums such as Burzum’s classic “Hvis Lysset Tar Oss“ or Altar of Plagues’ “White Tomb“). The production is noticeably different, eschewing the soft stream of “Guardians“ for a much sharper, punchier sound, with instruments hitting harder (especially the drums) and being more distinct. Andy Marshall’s strong vocals are no longer buried beneath heaps of effects but present themselves more naturally. The songwriting has adapted accordingly, with songs that line up differing moments in a much more straightforward way, letting the songs form a much clearer identity. The accompanying folk and classical instruments are still there, though not as omnipresent, but used much more tastefully and sparingly, which once again lends to the distinctness of the moments. Standard black metal instrumentation has much more prominence, with sharp guitars occasionally going to the forefront to drive the songs with soaring tremolo melodies.

The album opens with title track “Forgotten Paths“, and blasts straight in with riffs instead of going for a calmer interlude, immediately showcasing the rawer nature of the album. It flows nicely to the midpoint where we’re hit with total silence, until calm piano notes start off the rise. Suddenly we’re hit with some clean vocals that sound awfully familiar before the screech kicks in and you realize it’s the legendary black metal artist himself, Neige, with his unmistakable rasp. Some might call the inclusion of Neige a cheap trick since he likes to appear as a guest on albums left, right and center. But I still think he is one of the most expressive vocalists in extreme metal and his performance melded perfectly with what Saor is doing. It came right on top of one those Saor moments we love, when all instruments explode in a beautiful, very emotional cascade of melodies, and I think Neige is perfect for that.

The album continues with “Monadh“ probably the most ‘standard’ Saor track on here. But this certainly isn’t a bad thing, as it’s nice to see how things function with the new songwriting approach. The music works perfectly with the lyrics, describing a paysage of the solar cycle at the hillside which creates a scenery of natural beauty at its height. Many Saor songs are concerned with human endeavours, especially the historical plight of Scotland. But this one leaves it behind in favour of poetics of nature speaking for themselves.

The third track, “Bròn”, is in my opinion the standout track. It is probably the most streamlined, working with an identifiable, repeating chorus. But my god, is the chorus just hauntingly beautiful. Sophie Roger’s female vocals overlaid with sublime melodies of several instruments makes it extremely powerful, and I really don’t see myself ever getting sick of it. The rest of the song works perfectly as well, with an equally powerful build up before the first chorus, a striking tremolo riff that jumps into some superb acoustic guitar playing, raising the stakes before the chorus explodes them.

The final track, “Exile” I think encapsulates what makes this album good. It’s a 5-minute harp composition played by Glorya Lyr. With it’s slow, soothing melodies performed by a single instrument it might seem a bit austere, but instead it manages to do so much with so little. It is surprisingly powerful, evoking so much emotion, no less than the intense, much more complex black metal that preceded it. In this regard it is a great closer and summarizes what makes “Forgotten Paths” so good. Andy Marshall has showed that he evolved as a songwriter even when he already displayed so much talent. The songs here are concise, coherent and fluently accomplishing what they set out to do without any unnecessary compositional baggage, but without sacrificing the melodic and emotional intensity Saor is known for. With this, Saor set itself for a trajectory that won’t find it growing stale anytime soon.