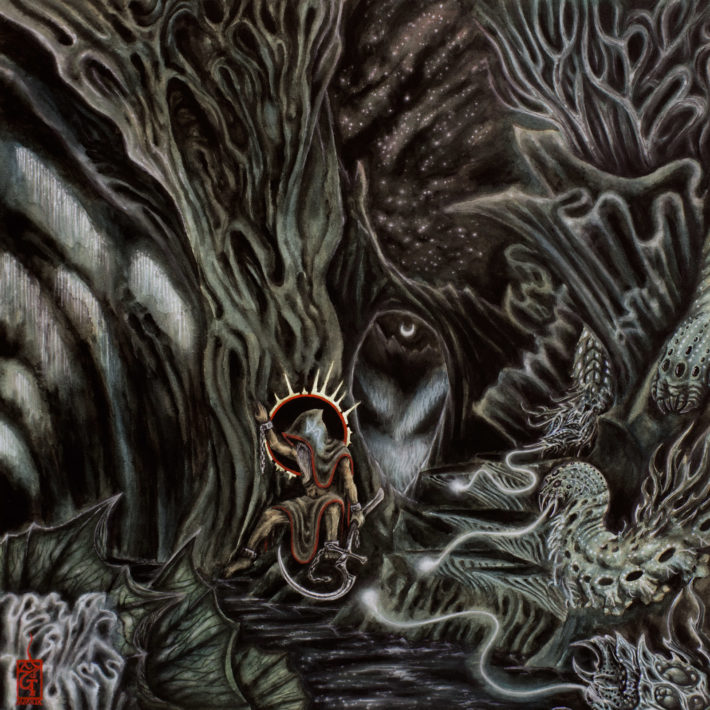 Picture this; It is a quiet Montana night and snow 12 inches high blankets the world around.  Temperatures hover in the single digits (Fahrenheit) and the only source of light is either the hazy street lamps or the reflected moonlight on the undisturbed snow.  A lonely soul trudges onward, wrapped in winter gear that is not quite enough to keep the chill out.  The day has been constantly moving for the last 14 hours and he is mentally and physically exhausted.  On this hollow walk home, shivering against the night, ambient black metal is playing through his headphones, bringing a tiny semblance of warmth.

Yes, that lonely soul is me and the album is Biolume Part 1 – In Tartarean Chains by Midnight Odyssey.  I’ve been listening to this album quite a few times over the last couple of weeks, thoroughly enjoying it, but truly experienced it while coming off the end of a long day and freezing my ass off. Ambient/atmospheric (these will be used interchangeably) black metal has always had an ability to paint a landscape while listening, and it is only enhanced when the the physical reality is the same.

As “Hidden In Tartarus” starts, it sets the tone for the entire record.  Other-worldly sounds coupled with simple drums and beautiful melodies.  Something that is immediately noticeable, not only in this song, but throughout the album is how catchy the melodic lines are.  The “ahhhh” part in this opening track reprises multiple times and by about the second or third time, I was ready to sing along (not something I thought I would be able to do on an atmo-black record). In the song “A Storm Before A Fiery Dawn,” the chanting/singing section that begins with “are you the one who called to me?” has been repeatedly stuck in my head ever since the first listen.  The chorus from “Pillars In The Sky” continue to echo long after the album has ended.

It’s this “catchiness” that makes this album unique.  I feel that many atmo-black albums do a great job of creating a sonic landscape, but they are hard to remember when they’ve finished.  Yet, by including these memorable melodies, I am able to recall this album more easily.  Even being able to sing along lets me feel like I’m participating in some sort of ritual created by Midnight Odyssey.

Another thing that is worthy of praise is the production quality of this Biolume…  Upon the first listen, I thought that it was fairly average.  But repeated listens revealed that there is much greater attention to detail.  Every single instrument and voice can be heard and is crystal clear.  The bass drums have a solid punch, the synths never muddy up the mix, and the guitars cut through quite nicely.  Even though everything is a high quality mix, it still sounds like an ambient black metal record.  Midnight Odyssey is conscious of the distinct sound of this subgenre and knows that something too polished would ultimately take away its overall aesthetic.  It is so refreshing to be able to listen to a high quality recording and have it fit within this style.

Through all this melody and progression, the album carries a melancholic feel to it.  From the beginning of “Hidden in Tartarus,” through the aggression of  “Biolume,” and even the somewhat cheery opening of “When Titans Fall.”  “Pillars In The Sky” concludes the album on an incredibly depressing note; despite its lack of drums, the depressive atmosphere it conveys makes it one of the heaviest tracks on the album.

Due to the melodic nature and the quality production of Biolume…, this is a great album for those who are on the fence about ambient black metal.  It balances atmosphere and progression, never straying too far into either.  It’s not like Lustre (one of my favorite atmo-black artists) in the sense that it’s too soft, but it isn’t quite as aggressive as something like Falls of Rauros.

All in all, this is a fantastic release that sets itself apart in this genre.  As Montana is about to enter its seemingly unending winter, this album will be getting much more spins from me.