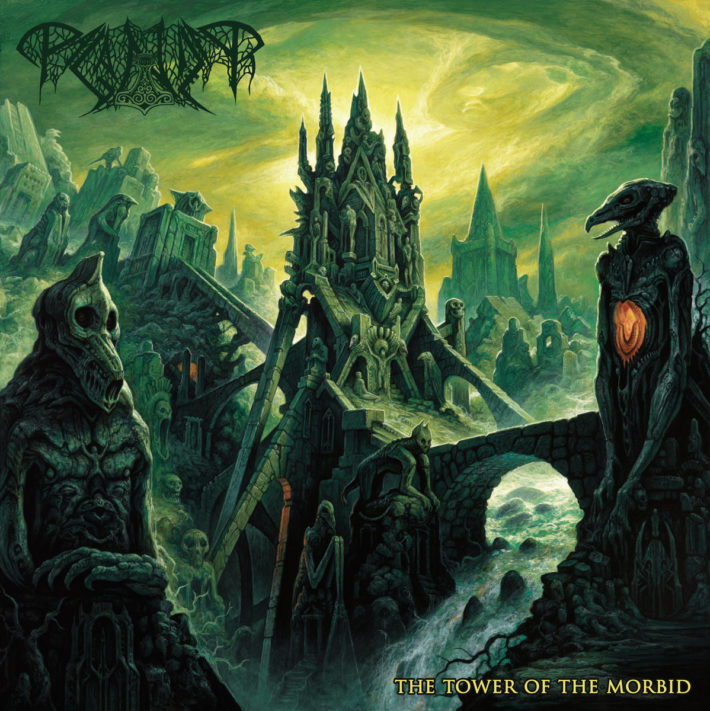 Some bands try to get too cute with their music. They try to add too many effects, or try to play above their skill level, or try to add genres to their music as a gimmick. Paganizer is not one of these bands. They know what they do well: write fun riffs with full vocals and the occasional guitar solo. As a result, The Tower of the Morbid leans heavily on these aspects. If you make one aspect of your music the linchpin of your whole project, however, you might want to make sure that it’s good enough and consistent enough to withstand the weight.

Let’s talk about the riffs first. There are quite a lot of them. They are usually pretty entertaining, although they are not generally impressive or attention-grabbing. As mentioned, the riffs on The Tower of the Morbid serve as the major linchpin of the album.  To Paganizer’s credit, this mostly works. Even when the riffs themselves aren’t great, they are good enough to let the music hold on until the good times return. And when the riffs are great, well, the entire album clicks together. That’s the point of relying on yours strengths: When you do it well, you do it really well.

Pretty much the same thing can be said about the guitar solos on this album, albeit to a lesser degree. Too often in metal, guitarists will just rip off massive flurries of notes with no musical rhyme or reason. I like Trey Azagthoth’s performances on Altars of Madness too, but it’s not always enough to play fast. You need some David Gilmour in your music too. Guitarist Kjetil Lynghaug brings this to the table. Sometimes. Solos like the ones on “Redemptionless” and “Rot Spreads” are great specifically because Lynghuag knows when to take a breath, when to include a melody, and when to shred. He plays with purpose. This doesn’t happen all the time, to the detriment of the record. Solos on “Apocalypse Writings” and “Cannibal Remains” are completely replaceable with solos from seventy-five million other death metal albums. Again, when they do it well, they do it really well. Unfortunately it’s not consistent.

The melodic elements of this album are interesting, partially because they don’t seem fully intentional. The promo material mentions “catchy hooks and riffs” while not wanting to admit what they are actually saying. No one will mistake anything from Paganizer for the new Insomnium album, but it’s much closer to that side of death metal than, say, Devourment. This isn’t actually melodic death metal, but the heavy reliance on repeated riffs results in some possibly unintentional singable moments.

Despite this, somehow none of the songs have great staying power. There may be melodic elements, but there are no really memorable melodic moments. The Tower of the Morbid does not really have any moments that blew me away in their catchiness, in their brutality, in their technical prowess, or in any other way. Some of the riffs can be pretty great, but not throughout the whole song. Some of the guitar solos are enjoyable, but not enough to buoy the entire album. At its best, this is a very good album. If it consistently maintained that peak, I’d be happier with it.

The Tower of the Morbid is an enjoyable album. Paganizer does a lot right here; one of their smarter choices was to rely on their strengths instead of on any musical gimmicks. Unfortunately, these strengths aren’t always good enough, and when they go, there is nothing left to maintain interest. To be fair, their “very good” peaks that were mentioned earlier are definitely half the record, but 50% is a failing grade. Not to say that this album fails, it is quite fun sometimes. However, the band’s strengths simply aren’t strong enough to make this a standout album.