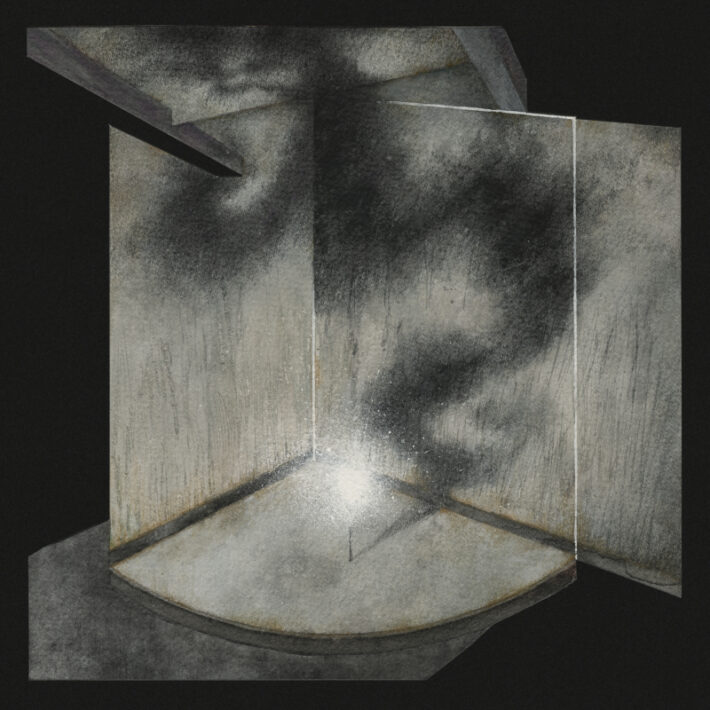 After releasing three demos from 2017 onwards, Dead Void are finally unveiling their debut full-length, entitled Volatile Forms. Hailing from a Danish extreme metal scene that gave us greats such as Hyperdontia, Undergang, Sulphurous, and others, Dead Void seem to have impressed the likes of Me Saco un Ojo and Dark Descent Records, who are releasing and distributing Volatile Forms. Utilizing dissonance and angular riffing in their crushing death doom style, Dead Void create an amorphous and structure-less record of lumbering destruction.

The heavy, plodding bass and kickdrum combine for resounding effect, mimicking the thunderous stomping of a giant creature. Production amplifies the low end, while the buzzing guitars flesh out the mid-range with blunt destruction. The A-side of Volatile Forms features the claustrophobic opener “Atrophy”, which centers on hard-hitting stomps and abrupt tempo changes. Buried vocals and tremolo on “The Entrails of Chaos” introduces a blackened, bleak and hostile atmosphere seasoned with unorthodox cymbal usage. Later on, the track “Sadistic Mind” continues the pummeling, before “The Reptilian Drive” hits on easily the most memorable riff on the record. The monolithic closer “Perpetually Circling the Drive” feels like a descent into chaos, beginning at a doomy respite before being consumed by the harsh atmosphere.

Volatile Forms is competent and well-performed, atmospheric and hard-hitting. It’s unpredictable and shapeless, like a formless cavern with no exit. However, Dead Void lacks the devastating riffing of other Danish death metal groups, and struggles to maintain the effective cohesion of Winter or Ataraxy due to some trimmable moments. It’s listenable and definitively good, but especially in a scene known for monolithic death metal, Dead Void’s debut struggles to stand out on the virtues of its strengths. Volatile Forms is still worth checking out for fans of this type of bleak, dispassionate death metal, and future offerings from Dead Void could easily stand to impress.