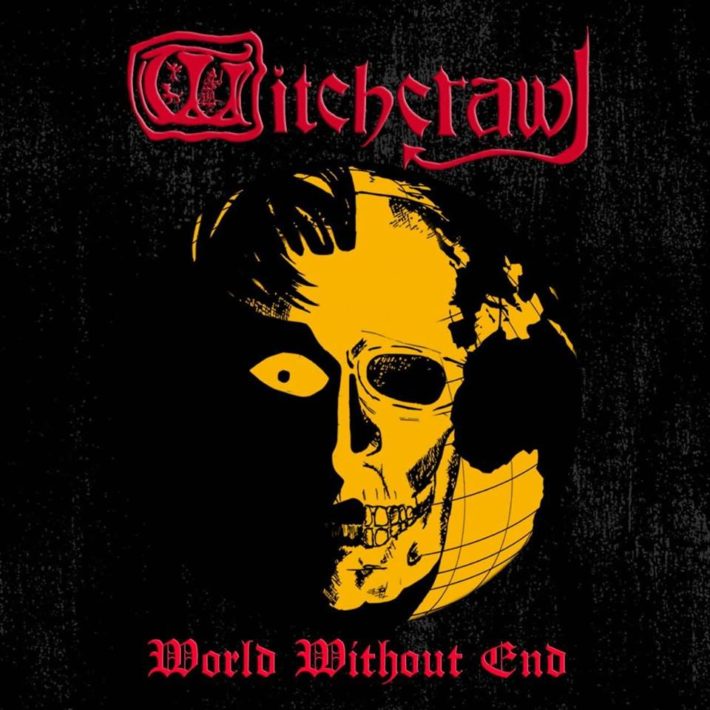 Nowdays, there is big trend in metal music: the revival of lo-fi, NWOBHM-style, traditional sounds. Today’s band, Witchcrawl, fits comfortably in this current, with a sound reminiscent of the end of the ‘70s/early ‘80s, consisting in traditional heavy metal with a hint of speed in it.

World Without End is the debut album for this band from Athens, Greece, and with its 27-minutes length it could be a long EP or a very short LP as well; nevertheless, it constitutes a great first approach, with 4 songs + an intro, and it paints an overall picture of this band, and, hopefully, of what it could become. On top of this, it has to be mentioned that the musicians are not first timers at all, as all of them have been in other Greek bands, most notably Akrotheism and Primeval Mass.

The band, which could almost be regarded as a supergroup, has the classic five-pieces formation: drums, bass, lead guitar, rhythm guitar and vocals, where the lead guitar plays riffs over the rhythm structure provided by the other instruments, sometimes with the two guitars in unison. There are also some galloping sections very early-Maiden-like, with, as previously said, speed metal influences residing in the tremolo picking and the double bass (no blast beats though). The vocals are neither operatic nor falsetto, but rather a more raucous, harsher version of Paul D’Anno or Kevin Heybourne from Angel Witch. With a strong Greek accent too, which perhaps makes the task of understanding the lyrics harder, but it does make this band instantly recognizable.

Let’s get now to the songs.
“Aradia Violette” is a spoken intro with background music: in XVI-century Scotland, a judge sentences a witch to be burned alive; the sound effects, and the buzzing, makes it sound like it’s coming from an old movie, and the classic occult-medieval theme sets the tone for what’s to come.
The second track, “An Eye For An Eye”, starts off in a speed metal fashion, and it narrates a story of vengeance and retribution; personally I think it’s the best song off this album, with a catchy riff plus a great bridge. It is also one of the three singles, another one being the title track which is also the next song.
“World Without End” is slower, echoing and chilling, this time taking us to a Sabbath at the crossroad. However, it suffers from a unclean production that buries the instruments a bit too much, and a vocal performance that could be better.
“Cydonia Rose”, the next song, is melodic, featuring a galloping section at the beginning and the end; it comes closer to be a power ballad. This track changes pace towards the second half, which makes it refreshing.
The final one (and last single), “The Doom Of Hades”, is fittingly doom-ish. But it is also that one song which isn’t entirely convincing; my opinion is that the vocals are not really fit to the style of the song, that would require a more operatic, Messiah Marcolin-like approach.

The lo-fi, fuzzy sound quality fits well this type of music, which is, I believe, quite rare, because often lo-fi simply makes a record less enjoyable, while right here it adds to the overall atmosphere. This choice is not deprived of problems though, because there are parts on the record where the sound becomes too muddy, and the vocals and lead guitar bury the other instruments, especially the bass. In summary, the idea of mixing a record like this is great, but the results aren’t the greatest; however, no need to be harsh: this is only a debut album after all, and there’s plenty of time to find the perfect sound.

Personally, I had fun with this record. It is entertaining, and while it’s not a masterpiece, it’s a nice way to spend half an hour, it contains a couple of good songs, and it gives you nice retro-occult vibes. It is definitely a promising album. There are things, on World Without End, that could have been done better, little elements that need to be polished; but as a debut, this is an encouraging first step.