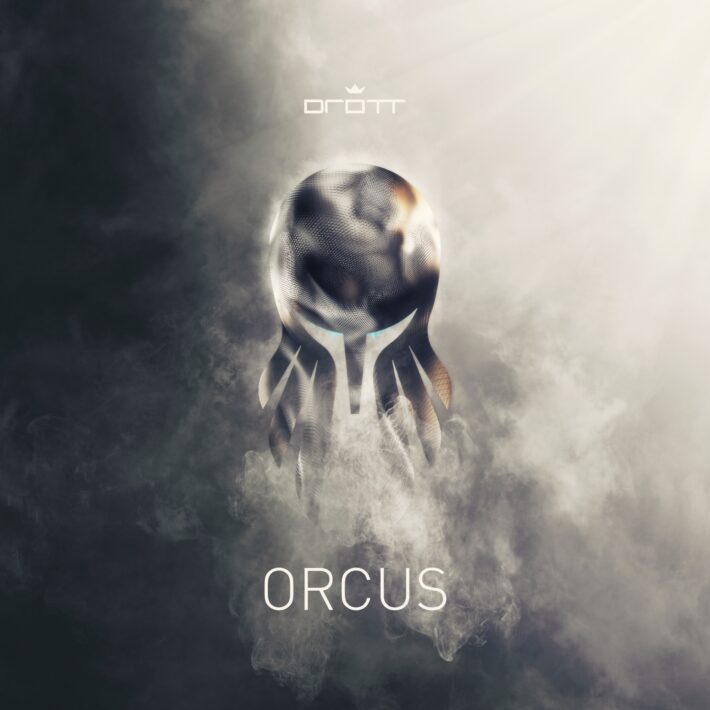 Experimentation is a really important aspect of music. Without experimentation, genres wouldn’t evolve, and every new band would sound the same as the ones that came before. Especially experimentation that fuses genres that aren’t normally heard together, can be very fruitful, possibly resulting in new sounds or even entirely new genres. The downside of experimentation is that it’s exactly that: experimental. And experiments don’t always turn out too well. This is the case with Drott, they experiment with various genres and musical styles, but unfortunately their record didn’t come out too successfully.

Drott is a band from Bergen, Norway, comprising Arve Isdal (Enslaved), Ivar Thormodsæter (Ulver), and Matias Monsen. Their debut album, titled Orcus, is thematically inspired by nature, superstition, and spirituality, and musically, the band experiments with genres like ambient, progressive rock, and folk. With members from two prominent bands in the Norwegian black metal scene, one might expect some black metal elements on the record, but with Drott, they’ve let go of those roots.

When I say that the album didn’t come out great, I don’t mean all aspects were bad. There are definitely parts of the record that are worth checking out if you’re into progressive rock or folk. For instance, the album starts with The Lure, which features an intriguing melody on strings that, halfway through the intro, gets accompanied by a guitar, building up to Caerdroia. The guitars are more prominent on this track and drums join in to emphasize certain parts of the riffs. On top of that foundation, the strings play ambient melodies, not necessarily building up to anything, but instead lingering on the same vibe, until the track flows into Katabasis, the only track with vocals. The vibe from the previous track is continued, but the guitar riffs and the changing drum rhythm make it so that the track stays interesting and refreshing.

What follows is a series of seemingly disconnected tracks on which the band experiments with different sounds. Drums with an electronic vibe and a smooth guitar on The Strait, a whistled folk melody with minimal accompaniment on By the Lunar Lake, or an ominous kind of horror movie soundtrack on The Marauders. The thing with each of these tracks is that they are so different in sound, that the listener never gets caught up in the music. It’s like they’re all interludes, but instead of building up to a new track, they just die off and make room for a new track with a new vibe that doesn’t really build up to anything either.

The only aspect that seems to connect the tracks is the story. On their Bandcamp page, Drott tells a story in which the title of every track is a new scene or character. The story is about Drott finding their way into the underworld, and after meeting various creatures, some good and some evil, coming eye to eye with Orcus, the Lord of the Underworld. When you just listen to the music, however, this narrative does not make the music any more coherent.

In short, with their debut full-length, Drott have taken the opportunity of experimenting with different genres, different soundscapes, and different vibes. The first three tracks of the record work really well together, but unfortunately, the album loses its flow afterwards. Some tracks work better than others, but because each one is so different and isolated from the others, most don’t transcend the function of an interlude. If Drott were to focus on one sound for the whole record, or if they were to put more effort into musically connecting the tracks, the band definitely has potential, but until that’s the case, their music unfortunately is no more than an experiment with mediocre results.