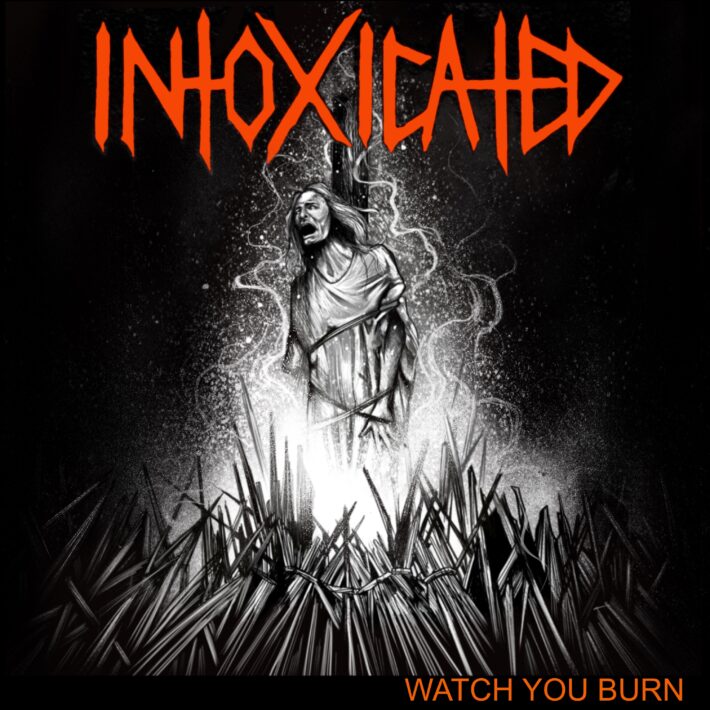 Intoxicated are a revived 1990s Florida thrash metal group with apparent deep ties to the state’s old death metal scene. They play a style of big dumb jock death/thrash with a focus on lumbering, simple mid-tempo-and-up riffs and on maintaining high intensity over complex writing. Watch You Burn is the band’s first full length release since 1997.

The band’s ties to Florida death metal make sense, given how much Intoxicated’s vocals reminds me of Death. The style fits this music well: It’s not the beastial gurgles of many current death metal artists. Some verses sound like they were left out in the sun just a bit too long. I thoroughly enjoyed listening to Erik Payne and Gregg Roberts scream, and found the occasional switch between their two voices to be a well-used tool in Intoxicated’s arsenal. The guitar’s tone helps as well. The sweet buzz of this instrument may not be unique, but it sounds full and fits in well.

The bass is full and easily heard thanks to a solid production job. Often when the guitar slows down and lingers over a note or two, the bass picks up the slack and keeps the track from stagnating or losing steam. The drums provide support with a more restrained approach than the somewhat popular style of throwing blast beats at the wall and seeing if they stick. This is obviously just a songwriting choice rather than a technical limitation. The speed and striking power of these drums ratchets up when desired.

From a song-writing perspective, what Intoxicated doesn’t do fascinates me most. These riffs border on AC/DC level of simplicity at times. For an example, see the end of “Revelation Denied.” Four long, slow notes, with a repeated low note. This pattern lasts for longer than should be feasible. Underneath this riff, the bass and drums do change up their patterns to maintain some variety. But this shouldn’t work at all. It does, and it does so because of Intoxicated’s brash confidence and full performances. They wrote songs that let them play to their strengths and it paid off.

This is not to say that Intoxicated put no thought or variety into their songwriting at all. Sudden tempo changes litter Watch You Burn, and they serve to spark focus and break their songs into more digestible chunks. Additionally, saying the result of the band’s writing process is simple riffs does not mean that their writing process itself was simple. Like their drumming, Intoxicated take a restrained approach to their songwriting. That their four note “Revelation Denied” riff works so well is not a happy accident.

For songs that are this direct, you’d think that there would be memorable moments all over the place. Not so. There are a lack of standout moments throughout Watch You Burn. Despite Intoxicated’s ability to write effective riffs and bouncing choruses, most of these recede into the background as good thrash moments with nothing special about them as Watch You Burn fades to memory.

In fact, the entire record kind of fades. Watch You Burn is a solid example of death/thrash and a very good album, but it isn’t a great album. For all the fun I had with Intoxicated, the record never felt like a new experience. I enjoyed every listen of Watch You Burn, but never felt a strong desire to return.

Watch You Burn will satisfy anyone looking for the next fun death/thrash record to have on in the gym, and will satisfy no one looking for the next big record that will rock their life. And that’s fine, not every record can be more over-the-top than everything else. Intoxicated have made a no-nonsense experience that will bring a lot of people joy, and I’ve gotten my share of smiles from this band.