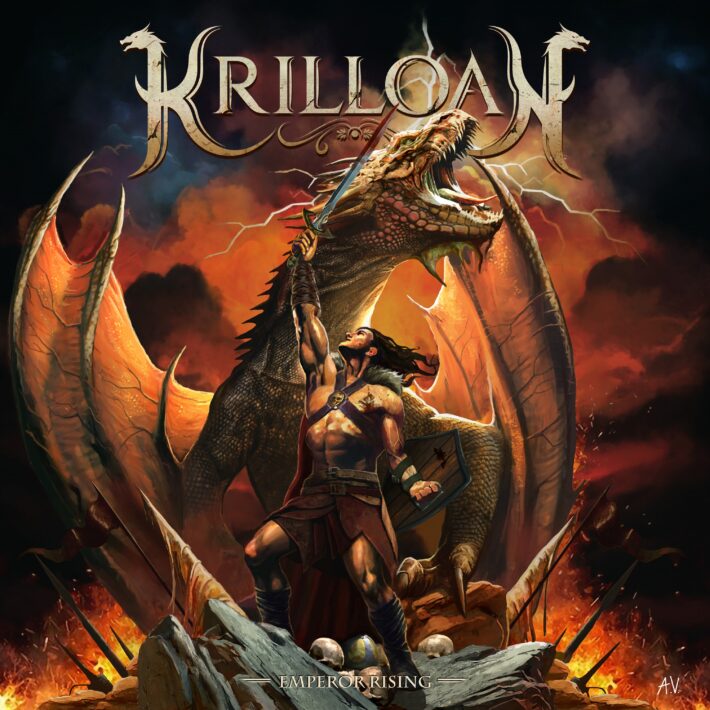 Krilloan are here to dazzle. This young, partially-Swedish power metal band made a nice splash last year with the release of the excellent Stories Of Time Forgotten EP, and the band has already prepared a follow up debut full-length release: Emperor Rising, on Scarlet Records. With riffs piled onto vocal harmonies piled onto a story that is only described as being “classical fantasy themes,” the multi-national Krilloan are ready to fly as high as their songs can take them.

Musically and thematically, Krilloan reminds me most of bands like Rhapsody Of Fire and Ancient Bards. The cover art of this record shows a partially-clad, muscular man holding a sword in front of a dragon, and that’s exactly what you get. If you listened to Stories Of Time Forgotten, prepare for absolutely no changes. If you didn’t, prepare for some music that subverts exactly zero of the tropes laid down by power metal elders. You’re here have ridiculous amounts of fun, musicality be damned.

This sort of authentically cheesy music can lead to some impressive, virtuosic moments. The vocals and guitar solos each shine throughout Emperor Rising. I know that death metal roaring and black metal shrieking can be aesthetically pleasing, but sustained falsetto with excessive vibrato to bring a song crashing to the end simply pulls on a different heartstring altogether. Emperor Rising’s guitar solos pull in the other direction, focusing more on melody than on the shredding-at-all-costs approach that plagues death metal. The result is a memorable, shiny sound.

Everything else is fine. The drums serve their purpose and don’t go far beyond that, the vocal harmonies underneath the falsettos create a more fantastical, folk-y feeling, and the bass provides depth underneath the guitar shredding and sometimes gets its own line. The production is clean enough that nothing gets lost in the mix, but doesn’t really help the record succeed.

Krilloan’s songwriting, unfortunately, is just fine. Going further with the Rhapsody Of Fire comparison, this feels like a post-Luca Turilli release.The riffs are great, the choruses are memorable, but Emperor Rising does not fully make use of the operatic potential of power metal. The genre gives the opportunity for absurd levels of excess, and Krilloan sound primed to take advantage of this. Instead they just kind of follow patterns that are safe and standard for power metal. The vocal lifts that work so well in “Prince Of Caledor” already sound worn down by the time “Fireborn” hits.

Krilloan’s biggest weakness is that they are playing power metal that directly competes against forty years of legends, and their biggest strength is that they do so extremely well. “Break Of Dawn (Brothers In Arms)” has me listening to Blind Guardian’s “The Bard’s Song” to see if I’m imagining things. Is this as good as Blind Guardian’s release from earlier this year, or Helloween’s self-titled release from last year? Maybe not, but Krilloan can at least stand up with the giants. Emperor Rising doesn’t necessarily fill a void, and there is no real reason to listen to this over a band like Fellowship. Yet, I very much enjoy Krilloan, and will continue listening to it even though I think the songwriting could improve.

I came into this review ready to complain. Now that I’ve done that, I have to admit that some of these complaints do not affect the listening experience all that much. Yes, Krilloan apes Rhapsody Of Fire and Blind Guardian a little too much. Yes, their songwriting approach clashes with their style. Yes, some performances feel wasted. I still had a blast listening to Krilloan. Their techniques are genre stereotypes because they work. If you like these power metal bands even a little bit, check out Krilloan to find a new musical pool to dive into. If you don’t, nothing on Emperor Rising will change your mind.