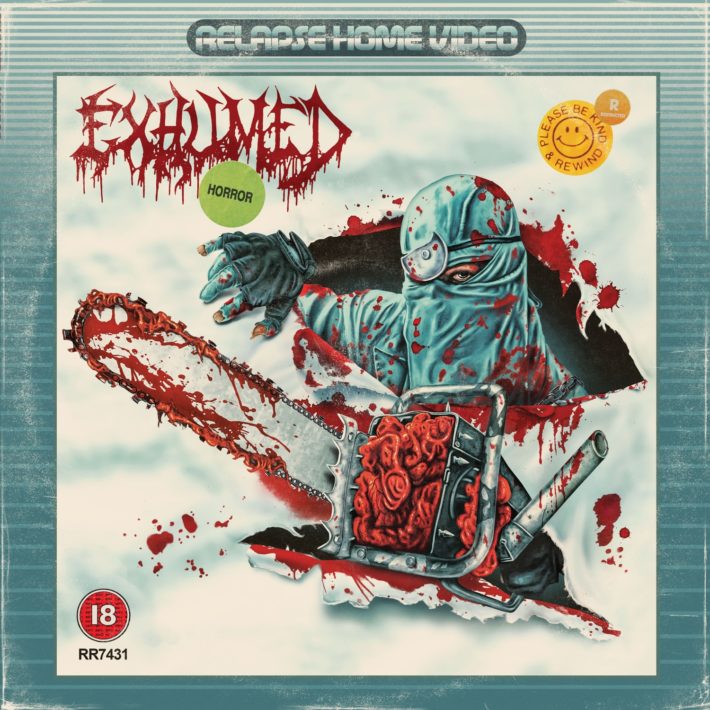 When Slayer’s Reign in Blood came out in 1986, it caused quite a stir. The over-the-top imagery, the nazi-worshiping lyrics, the ghoulish, satanic themes, combined with the excessively short and to-the-point music allowed the album to spread much farther than an otherwise identical album with more subdued marketing would have. Thirty-three years later, Exhumed releases Horror, a grind-infused soundtrack to a b-tier horror movie that doesn’t exist, and you can add it to the pile of ridiculously over the top attention-seeking satanic or evil releases from metal bands looking to catch anyone’s eye in a saturated market from this month alone. Unfortunately for Exhumed, they’ll have to rely on their actual music to impress fans rather than a marketing gimmick.

Fortunately for Exhumed, their actual music does, in fact, impress. Horror is significantly faster and shorter than the band’s previous release Death Revenge, and this creates a sense of focus that some death metal bands can lack in their old age. This also adds to the sense of fun. When one is listening to this album, there is never any down that the band had an absolute blast creating this album, due to everything from the album art to the bad-halloween-movie song themes, to the moments that are completely unnecessary but fun, such as the seven second long track “Utter Mutilation of your Corpse.” Matt Harvey, the band’s leader stated in the promo material that “If you like the more intricate, melodic stuff that we’ve done, this may not be the one for you. If you’re a fuckin’ maniac that wants to pound some beers and smash up some tombstones, this is the record you’ve been waiting for.” He’s not wrong. This album sacrifices anything and everything for aggression.

If we leave the expectations of death metal behind and move onto grindcore, however, this album changes from a violent, bloody headbanger to something closer to a fine interpretive dance. When everything is over-the-top aggressive, that’s not enough to make an album stand out. Exhumed manages to avoid a potential pitfall here by also being excellent song-writers. Obviously none of these sub-three-minute songs outstay their welcome, but they mostly feel like complete ideas that would have become bloated and tired if they had continued any longer. Despite the sub twenty-seven minute runtime, Horror doesn’t feel too short. This is a band that can cram quite a bit of interesting music into a single minute. This isn’t atypical of the genre, but it is always nice when an album checks off the boxes that it is supposed to check off.

Despite the grindcore elements of Horror, Exhumed are a death metal band at heart. The band has been quoted as saying that they focus their songwriting around the choruses and trying to make them as centered as possible in the music. Some songs on Horror are basically nothing but the chorus, so the band apparently wildly succeeded there. However, the balance between being catchy and being aggressive isn’t always work out. Earlier I stated that Horror sacrifices anything and everything for aggression. This wasn’t entirely a complement. Despite the choruses, and being usually excellent and catchy, sometimes they simply get lost in the wind as the song crashes on by. The album doesn’t help itself here, as sometimes leaning to the aggressive side of the music can undermine what should be the strengths of the album.

Ultimately, Horror is less than the sum of its parts. However, that doesn’t mean it’s bad. This is an entertaining, over-the-top, self-aware grind album that despite its own efforts is still catchy as hell at times. The theme and extremity of the album aren’t anything special anymore, but the music itself makes up for this and creates an overall enjoyable experience. It’s not 1986 anymore, extreme aesthetics aren’t enough. Horror doesn’t stand out or stand above its peers in many ways, but it doesn’t fall behind the pack either.