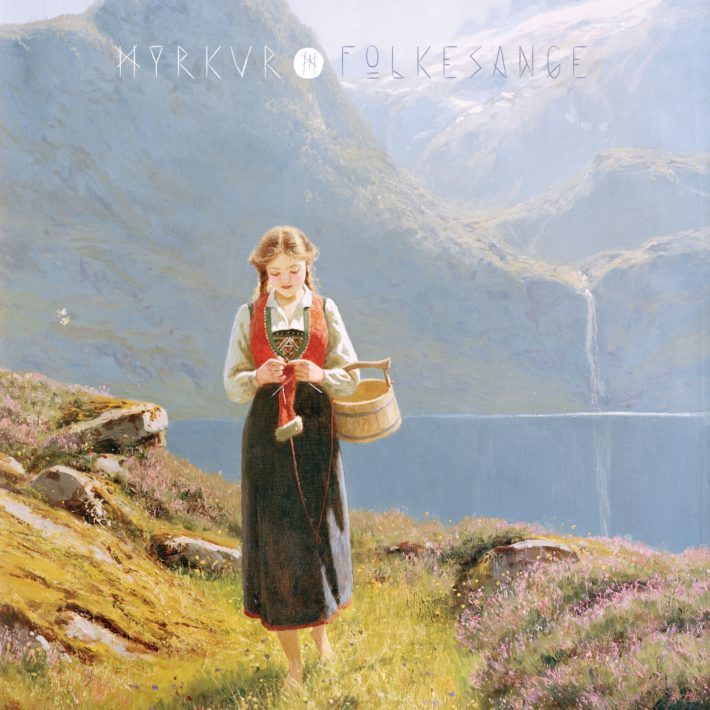 A few years ago, I made the questionable choice to go roller skating. To know how it went, picture in your mind a whale attempting to win a go-kart race while on painkillers and blindfolded. Also, the whale is wearing roller skates. At one point, someone said something garbled over the intercom, at which point I shrugged and went back to my interpretation of roller skating. Everyone else except the hardcore roller-skaters proceeded to leave to watch them, as the intercom had apparently instructed, meaning that the only people left in the rink were a handful of people beautifully and elegantly gliding across the floor in unison, as if performing a ritual dance to form a portal to the time of the 80s ballad muddily making its way out of the somewhat decrepit speakers. Anyways, today I’m reviewing a folk album that has none of the traditional trappings or influences of the metal music I’m most familiar with. I’m sure it’ll go great.

Folkesange is a collection of Swedish folk songs from occasional black metallist and multi-faceted artist Myrkur. For those who don’t know Myrkur, it is a one-person band by Amalie Bruun. She has had an extensive career in various acts ranging from the black metal of her former albums as Myrkur, to some more pop-focused sounds, to featuring on an R.A. The Rugged Man song. Here,none of those influences are present, as Folkesange tries to take her sound “into the very heart of the Scandinavian culture that marked her childhood.” Given that some songs are in English, I suspect that Folkesange is not completely full of actual traditional Swedish folk songs, and is instead just an evocation of the past.

I am not the world’s foremost expert on traditional Swedish folk tunes, and as such I have absolutely no idea how successful Bruun was at capturing the essence of the ancient Nordic sounds. However, she has successfully managed to tap into a primordial spirit with Folkesange. Everything here sounds very old and familiar. This isn’t a derogatory statement, I do not mean that anything here is derivative. Rather, Folkesange brings out sounds and feelings that are buried deep within the social unconsciousness, as if these are unearthed songs from hundreds of years ago rather than something potentially written while watching a Twitch streamer. The promotional material claims that Myrkur “offers an emotional sanctuary, a means to reconnect to something permanent and nature-aligned,” and in that respect Folkesange completely and unequivocally succeeds.

Folkesange gives you melodies that will stay in your head forever. Everything Myrkur performs on this release errs on the side of simplicity and sparseness, and the result is music that is as catchy the first time you hear it as it is the tenth. This makes sense, as this music old folk tunes would have to be memorable to be, you know, remembered. However, there is a difference between attempting to write memorable music, and succeeding in doing so. Yet again, Myrkur has marvelously succeeded.

Bruun’s vocal harmonies carry the album. Her singing throughout echoes with clarity and emotion, but when she sings background harmonies as well, Folkesange reaches its height. There are times when adding more of a good thing makes the thing worse. A glass of water will quench your thirst, an ocean will drown you. This is not the case here, as every moment of Bruun’s singing makes me want more.

The non-vocal instruments don’t fare so well. Nothing sounds bad or out of place, it’s all just kind of boring without the voice. A side effect of making the music pseudo-minimalistic is that it becomes more difficult to maintain interest. The strings fail where the voice overcomes. Occasionally, Myrkur attempts to cram in an instrumental passage and every time this happens I want to just skip to the next song.

There is also too much droning, which ended up making everything sound too similar. Most of the individual pieces use an where they will have one string instrument or voice play a sustained note while the other sounds progress around it. This isn’t particularly unique to Myrkur, but it’s used excessively on Folkesange to the point that the effect is ruined. It sounds amazing for the first three or four songs, but by the end everything just blends together and the listener gets lost in a hypnotic trance full of eclectic string instruments. It isn’t as fun as it sounds.

There were many great moments on Folkesange, and I look forward to listening to those moments for years to come. I also look forward to skipping the more boring moments now that I don’t need to worry about them for a review anymore. This feels like an attempt at something out of Myrkur‘s comfort zone, and so some awkward moments are forgivable. Folkesange is worth listening to, if only to unlock nostalgia you didn’t know you had.