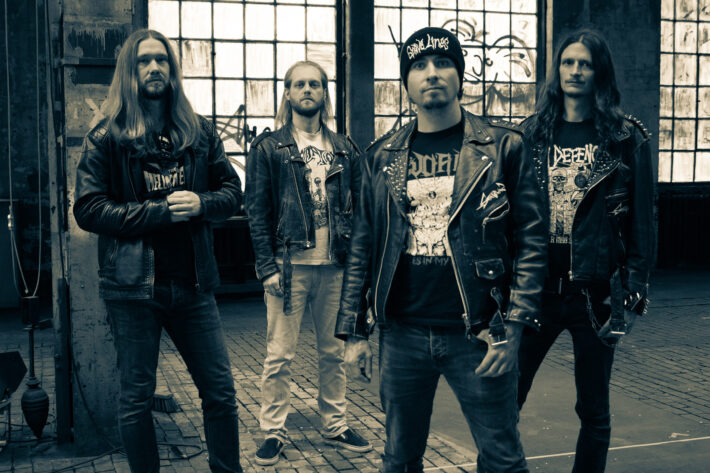 Teutonic thrash metal maniacs Stagewar are set to release their new album this September; in preparation for the event, I had a chat with the guys abut the new album, and the current situation concerts-wise.

Hello, this is Rick. Who am I talking to? What do you play in the band?

Hey there, this is Kimon (Guitar) and Dezius (Vocals/Guitar).

Stagewar has been around for almost 20 years, yet this is only your third album, how come?

We were 16 years old when we started the band. We released a lot of demos before we released our debut. In 2011 we were ready for our debut “Living on Trash”.
We’re a band that plays a lot live, that’s always our focus.

You recently played a show in Hessen; was it your first show post-lockdown? How did it go?

Yes. We played our last show in February last year. Now we have played our first two live shows. Further shows are planned for November.

Do you think that now concerts will be back? Do you plan on touring, after the release of “Danger To Ourselves”?

Sooner or later for sure. We definitely plan to go on tour again. To what extent, of course, depends on how things continue.
But our job is to give live concerts. That is exactly what we plan to do.

You shot a music video for the song “R.U.N.”, was it your first one? Will you release other videos for the songs on the new album?

“R.U.N.” was the first video for our new album and we are planning more. The second is out this month. We also produced live videos in our rehearsal room.

“Danger To Ourselves” comes six years after your second album “Killing Fast”, and you have definitely stepped up your songwriting game, as well as the production aspect. What has changed and improved, during these years?

It’s been six years! We haven’t changed anything in the process. We stand together in the rehearsal room and write the songs.
But a lot has changed in the recording process because we made the recordings entirely ourselves.

Going back to the subject of shows, how was the underground music scene in Germany impacted by the lockdown? Were venues able to survive?

We know a lot of clubs that unfortunately didn’t make it. But we are confident that this dire situation will certainly create something new.

Short and sweet! Thanks a lot to everyone in Stagewar for this interview. “Danger To Ourselves” comes out on September 24th; in the meantime, follow the band on Instagram, Facebook and Twitter – and stream their music on Bandcamp and Deezer!