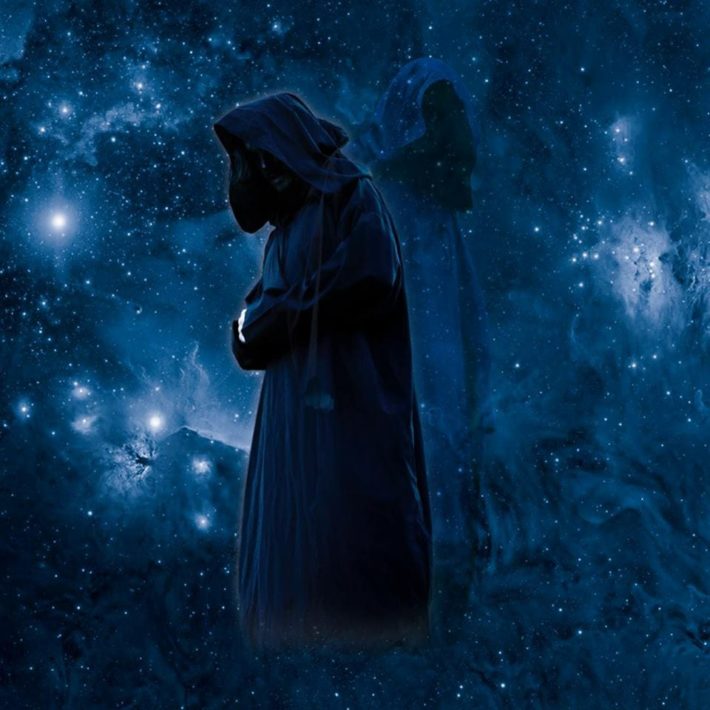 I had the opportunity of interviewing Dis Pater, the man behind the atmospheric black metal band Midnight Odyssey. We talked about his soon-to-be-released album “Biolume Part 1 – In Tartarean Chains”, the band’s future projects, and the story told by the album.

When presenting your new album, you said it’s the first of three chapters. What made you opt for a trilogy, instead of a double, or triple album?

Apart from the struggles with the amount of time a double or triple album takes, the main reason for the division is the style of music, with each of the three planning to be slightly different musically, and all about separate, though interconnected themes. A lot of people never gave “Shards of Silver Fade” a chance because of the monumental size of the album (Midnight Odyssey’s second album, with a total playing time of 2:22:38, ed.), but it also required a lot of time and patience invested to make it all happen and seem cohesive enough to become one single album. I felt that after “Funerals From the Astral Sphere” (Midnight Odyssey’s debut full-lenght, ed.), which was a also a double album, that a return to single album formats straight away might not be the best option, and I’m very glad I persisted with that. But a lot has changed and the amount of time I can give to musical creation is far less now than what it was back then.

Following this lead, the new album is significantly shorter than the previous two: both your albums were over two hours long, while this one is a bit over one hour. Did you consciously write shorter songs, or was it just a spontaneus idea? Did the project of a trilogy influence this?

Well the album still clocks in at 70 odd minutes, which by many people’s estimates is considered a very long album. I really wanted to focus on writing more concise songs, rather than the meandering and brooding passages that the 15-20 minute songs have. I know some people might still scoff at my idea of a 12 minute song being more concise, but I simply don’t really write 3-4 minute songs. The tempos are slower, there are atmospheric build ups which seem rushed in a shorter song. It was very much a conscious decision because I wanted to write two albums that were separate, but seeing that 4 years has passed since the last album, I ended up with way more material than I anticipated. Stretching it out to a trilogy helped relieve some of this problem I had with cutting too much material away.

While introducing the album you mentioned Nature, as something which is «apparently indifferent, yet always compassionate in its embrace and glorious in its beauty», and the themes of «fallen gods and resentment, of sacrifice and despair». Are those themes only confined to a long-gone, mysterious world, or, given the recent worldwide events, do they also speak to the present? If so, do you believe that we, as a species, have banished ourselves from Nature, resenting this separation and now looking at ourselves as fallen gods? Are we watching our mother Nature’s last moments of beauty, before its death?

I think the themes are not confined to any particular time in human history. I’m very careful to write things that cannot be placed in a given timeframe, because I think the main problem with a lot of music, is that it becomes synonymous with the era it was written. When you write about human inventions in songs, such as telephones, or television, radio, etc, you place that song in that period of human history, and thus when time moves on, the song becomes filled with nostalgia, rather than any real and useful message about the world as a whole. Nature preceded us, it includes us, and will exist after us. Whether it be species, planets, stars, empires or individuals, they all have their time in the sun, and then fade away, and I think it’s important to be conscious of that, that we as humans will also fade away. Whether you want to place that in a distant past, the present or the future is up to the listener really, but its presence is there regardless. I don’t think we have banished ourselves from nature, I think we have forgotten our true nature, and despise it, or maybe more truthfully, are afraid of it. In regards to your last question, fire may burn, land be swallowed by the sea, but nature will still go on, New things will replace the old, it’s happened before, it will happen again.

This third album is titled “Biolume Part 1 – In Tartarean Chains”, and there are plenty of references to Greek mythology in the lyrics, such as some verses from Ovid’s “Metamorphosis” in the opening track, “Hidden in Tartarus”, and the whole song “When Titans Fall”. Was Greek mythology your original baseline that later developed in the theme of Nature vs/with Mankind, or did you ‘encounter’ Greek myths later on, while you had already focused on those major themes?

Midnight Odyssey has always incorporated elements of Greek and Roman
mythology and history, that is classical antiquity. Its uniqueness for me is that through another religion, Christianity, these writings and myths were preserved and thus spread over all of Europe. The influence of these two cultures is everywhere in the world, and again, in terms of a more universal representation of the trials and tribulations of humanity, it just fits naturally within the context of the music. I can personally relate more to the stories from Ovid, or Homer than I can to the sagas and beliefs of the Norse or Celts. So with the first album being always about a banished god, it naturally came to be Saturn/Cronus, he ruler of the golden age, the one who overthrew his father, only to be likewise overthrown by his own son. This is symbolic to me of how things change from generation to generation, but also to a more universal pattern of nature.

The overall sound is a carefully-crafted mix of black metal elements and more atmospheric ingredients, and the tracklist tells a story, as we said above, of banishment, and despair. The songs are not only arranged story-wise, but there’s also a progression, musically-speaking. The first songs are much more brutal than the ending ones, with the final song, “Pillars in the Sky”, being radically ‘quieter’ then the rest, almost like a lullaby for a fallen god. Was it intentional? Does it represent the emotional shift, from anger to desperation?

Yes again, the order was carefully chosen to reflect the narrative, which follows from hopelessness, through spite, and in the end to an almost defeatist position. To finish on the ambient “Pillars in the Sky” was decided very early on as it doesn’t really provide an uplifting or positive element at the end of the album. It’s really a self confession, spoken through the words of a banished god, but also on the nature of my position as a creator, where people are very quick to lift you up and tell you how great you are, and then even quicker to judge, criticise and throw you back down to the earth where they tramp all over you. It’s not like this is only unique to the pop culture of today, as read any book from Roman or Greek historians or philosophers and you will see it’s as much a nature of humanity as anything else.

In your own words, on this album you are «not an entertainer, but a messenger of death, a temporary vessel with whom the universe channels its most darkest and hidden truths». What is this message that you bring?

I really want people to work that message out for themselves. Whereas my lyrics are far from being blunt, I think it’s not too hidden in poetic verse to not be unseen by people. I think it’s best people take a look around where they are, stop and think about everything that’s there, and consider how finite it is. Look at your hands, think of what you have done with them. Look up to the sky, and think of all the people that have come before you and looked at those same celestial objects.

Now, I’d like to talk about the album itself. Midnight Odyssey is a one-man band, thus you are credited for the whole writing and recording of every instrument. You sang, played the guitars and added the synth part. How was the whole process structured? Did you start from the music, or the lyrics?

Yes I do everything in this ‘band’. I start with the music first, then think of a general theme or idea I would like to explore lyrically, then usually write a few more songs. Lyrics come last usually, except one or two bits and pieces. Things are recorded, re-recorded, re-recorded again until I get the sound I am happy with. I know it’s more and more common for bands to do ‘behind the scenes’ kind of videos and footage, but I like to leave things up to the imagination, as that’s really half the fun isn’t it? I can confirm none of my music is recorded in a forest.

Of course, being the only soul behind the project brings its problems when thinking about live performances. Have you ever thought about performing in front of an audience, either alone with a backing track, or accompanied by a band?

Whereas I won’t 100% rule out live performing, it is not in my plans to get a band together, or go touring. A back up track on stage can give the effect of a glamorised karaoke performance, so I would not do that either. It’s something that for the foreseeable future at least, I am not considering.

And finally, how much will we have to wait for the next chapter? Personally I’ve loved the album and I’ve also recommended Midnight Odyssey to many friends of mine, and I already can’t wait.

Thank you, I’m hoping Part II will be out next year, so not too long
to wait at all!